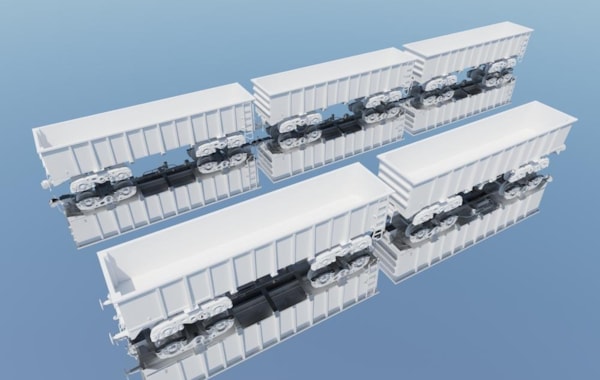 The Irish manufacturer's next project is to be the Redpath Dorman Long-built PTA/JTA/JUA bogie iron-ore/stone tippler wagons.

Accurascale has unveiled plans for its next wagon in 4mm:1ft / OO gauge scale - the Redpath Dorman Long-built PTA/JTA/JUA bogie iron-ore/stone tippler wagons. The long-lived and widely travelled wagons are the subject of the fifth new 4mm:1ft scale wagon model from Accurascale and like its previous wagon announcements, this pattern of PTA/JTA/JUA is a wagon never produced before in RTR format in the scale. CAD artwork for the wagons is compete and is now in China with tooling underway and delivery is expected in January 2020. As with all Accurascale models, a high specification model, laden with separately-applied detail will be produced with the following specification:

Built in three batches by the British Steel subsidiary Redpath Dorman Long from 1972 for transporting iron ore to Consett, Llanwern, and Ravenscraig, the tough-looking tipplers stood out further with attractive liveries and rode on distinctive BSC ‘Axle Motion’ bogies. They soon became a favourite with enthusiasts as they became synonymous with the heaviest trains on the British Rail network. The Port Talbot to Llanwern trains saw 27 British Steel PTA tippers triple-headed by Class 37s, before the introduction of pairs of the then-new Class 56s on trains of 30 wagons.

Following the closure of Consett in 1980, a batch of PTAs became temporarily redundant before being bought by Procor. These found work on Mendip stone trains, going to Foster Yeoman and ARC. Their use was in block formations from quarries at Merehead, Whatley and Tytherington to depots in London and the home counties. Once again, the PTAs found fame as wagons in the heaviest regular freight trains in the UK, with 43 wagons being hauled by a pair of class-56 locomotives from Merehead to Acton for Foster Yeoman. 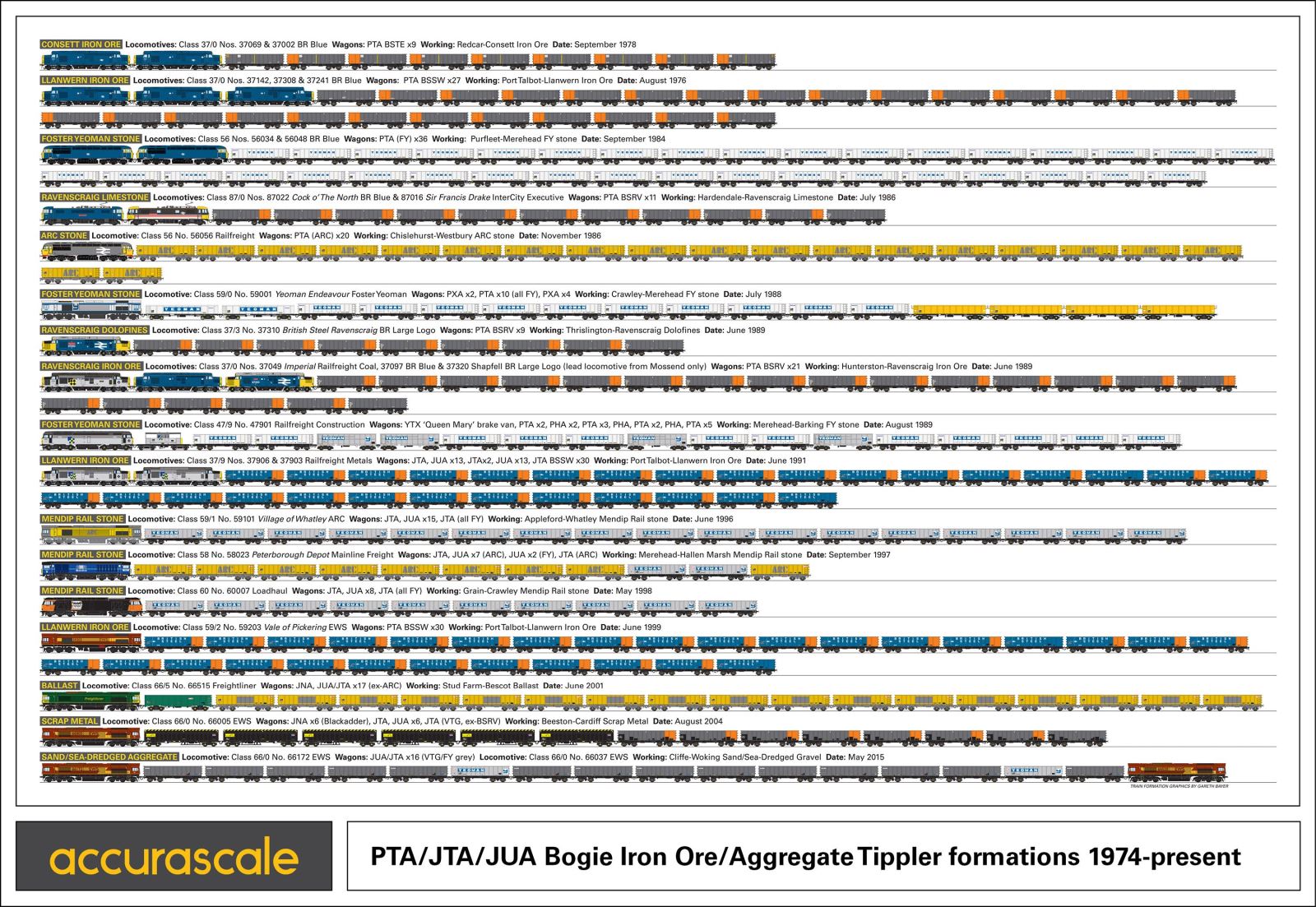 The wagons would be painted in distinctive house liveries of Yeoman grey and ARC mustard, and see service behind the then-new Class 59, as well as a wide range of BR locomotives, much like their British Steel counterparts which were enjoying electric traction haulage on the WCML with pairs of Class 86 and Class 87 locomotives.

The PTAs continued to provide service for British Steel across Britain as well as Yeoman, ARC and its successor Mendip Rail into the 2000s. Wagon leasing company VTG took on rakes of JTA/JUAs in the mid-2000s and they were used on spoil trains as well as sand and sea-dredged aggregates until withdrawal. 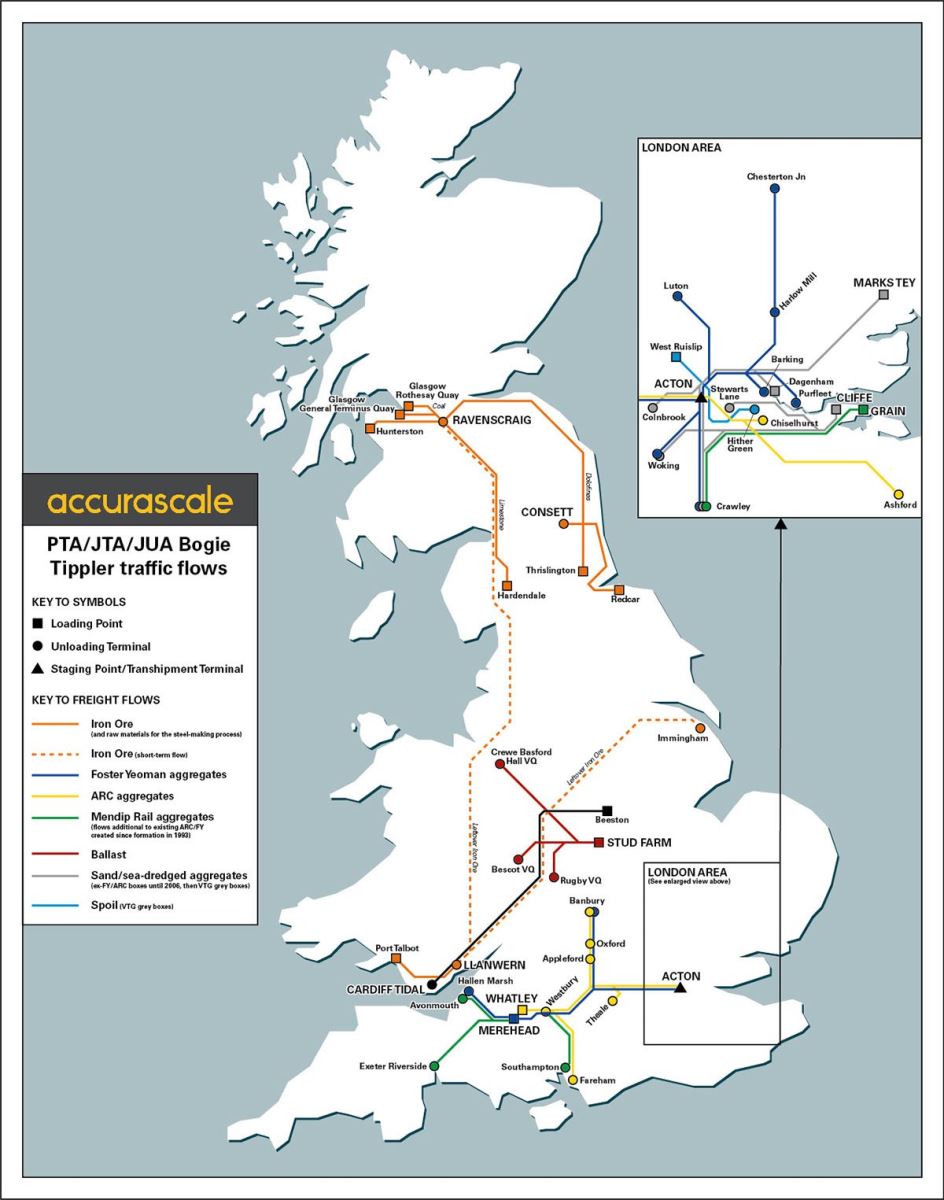 Liveries in the first run will include British Steel, Yeoman, ARC and VTG. The wagons will be sold in ‘book’ sets of 5, with outer and inner wagons. There will be additional book sets of 5 inner wagons in both Yeoman and ARC liveries to boost rakes to prototypical lengths. Visit its website for more information.