Rapido Trains UK is to manufacture an LBSCR ‘E1’ 0-6-0T, though we'll have to wait a little longer to find out its specifications.

With CAD designs received from its factory, Rapido Trains UK has shared images of its latest RTR locomotive announcement for OO gauge – the LBSCR ‘E1’ 0-6-0T. First suggested as a joint Rapido/Model Rail magazine project, the manufacturer asked for feedback. Claiming that the response was overwhelmingly positive, its work on the new model has begun.

Sales & Marketing Manager for Rapido Trains UK, Richard Foster said, “Your feedback told us that the BR and Isle of Wight versions were the most popular, closely followed by the original Stroudley design. So, while we haven’t confirmed what running numbers or liveries we’re making, we can confirm that our attention will focus on producing the BR and Isle of Wight ones first." 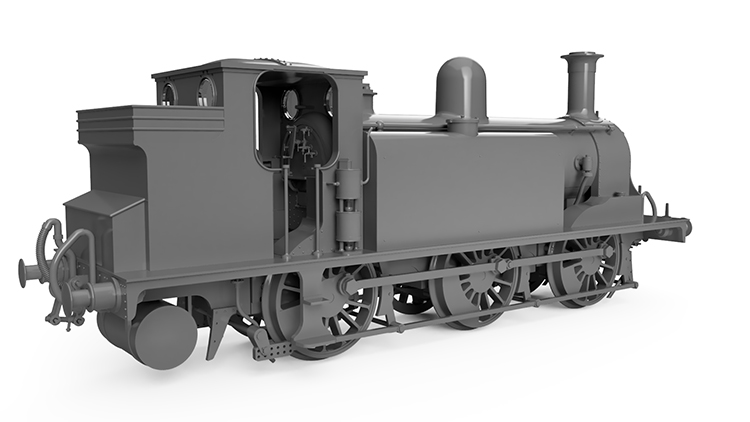 The manufacturer has been deliberately tight-lipped about further details and anticipated retail price, but these are expected to be published soon and will appear on World-of-Railways as they emerge.

A total of 80 E1 and E1X locomotives were built at the London Brighton and South Coast Railway's Brighton Works to Stroudley's design between 1874 and 1891. The 2F locomotives saw service across the railway's network, being absorbed into the Southern Railway, and finally British Railways in 1948. Locomotives were withdrawn from 1908, terminating as late as 1961, making the versatile Class long-lived and ideal for a wide range of steam-era modellers.

Rapido Trains' modified renders were taken from the original CAD file for the locomotive, but it has stated that these are only representative, with much work yet to be completed. Further details are anticipated to appear on the Rapido Trains website.

I will wait for the original Stroudley version. Has Rapido considered making the Jones Goods Locomotive? It was Britain's first 4-6-0 Locomotive. It appeared in many liveries including Stroudley improved Locomotive Green (yellow); Highland Railway Green; L.M.S. Black; Maroon?; and B.R. Black It also appeared in a ficticious livery in the film 'Those Magnificent Men in their Flying Machines'. Perhaps Rapido could make the aircraft from that film. That would be a challenge.