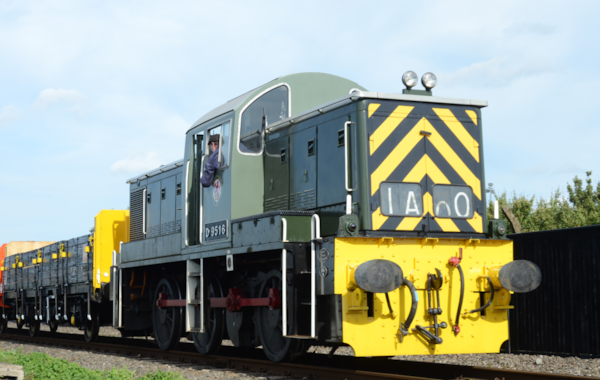 Branching out into models of RTR main line locomotives, the manufacturer announces a new 0-6-0 diesel in O gauge is underway.

Minerva Model Railways, manufacturer of ready-to-run O gauge locomotives, announced this morning the production of a BR Class 14 0-6-0 diesel hydraulic locomotive in O gauge. Minerva’s first venture into main line diesel traction was made public this morning at the Association of Larger Scale Railway Modellers' Reading Show. Design work is reportedly almost complete, and the models are expected to arrive early next year.

The manufacturer has said that the models will be built to the same general specification as its previous GWR 57XX/8750 0-6-0PT, Kerr Stuart Victory 0-6-0T, Manning Wardle K 0-6-0ST and Peckett 0-4-0ST locomotives. The specification has confirmed an injection-moulded body with in-excess of 200 components, a die-cast metal chassis with all-wheel pickup. A high-torque flywheel-equipped motor powering a 40:1 gearbox, plus DC/DCC ready, DCC-fitted and DCC sound-fitted using Plux22 technology.

Other features include a detailed and illuminated cab, directionally-illuminated four-character headcodes, sprung buffers and draw-gear with cosmetic screw couplings and a sheet of waterslide decals with BR running numbers and etched metal sheet with builder’s plates and BR shedcode plates. Models will be available in BR two-tone green livery with black and yellow wasp stripes and BR crest. Minerva Models has informed us that a bespoke DCC sound project is being developed.

Advanced orders before November 30, 2019 will qualify for a discount of £30. The models will only be available direct from Minerva Model Railways via mail and telephone order, the Minerva website and from the Minerva stand at selected model railway shows. Further information, including pricing, is available from the Minerva Models website www.minervamodelrailways.co.uk.

About the Class 14s

The Class 14s were ordered in 1963 and designed for trip working movements between local yards and short-distance freight trains. Fifty-six members of the class numbered D9550-D9555 were built at BR’s Swindon Works with the first delivered in 1964. The anticipated work on BR quickly dried up, and from 1968 the locomotives, some after a brief sojourn at Hull Dairycoates in 1967-68, were either sold to industrial operators including the National Coal Board and the British Steel Corporation or scrapped. Nicknamed 'Teddy Bears', 19 of the locomotives survive in preservation around the UK.