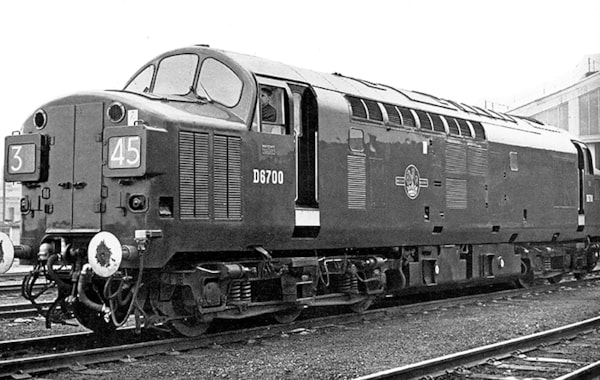 Exclusive models of English Electric Type 3 D6700 will be available from Locomotion Models from Autumn, 2021.

Celebrating six decades since delivery of the first Class member on December 2, 1960, Locomotion Models has today unveiled its commission of D6700 in OO scale for its National Collection in Miniature series. Models will be produced by Accurascale and depict the locomotive 'as delivered' to British Railways, in plain green livery. The Co-Co locomotives will be ideal for early transition-era modellers looking to bolster their locomotive fleet and will be good candidates for running alongside early-1960s steam locomotives of the Eastern Region.

60 years ago, today on December 2, 1960, English Electric delivered the first of what was to become British Rail’s Class 37 locomotive, D6700, to Doncaster to begin its acceptance trials from its works at Newton-le-Willows.

309 examples of this mixed-traffic 1,750hp Co-Co class were built by English Electric and Robert Stephenson & Hawthorn between 1960 and 1965 to two basic designs, split and centre headcode. They could be found system-wide leading on freight and passenger services. 135 were rebuilt in the mid-1980s giving them a further lease of life, while further major rebuilds have taken place since privatisation. Many are still in service today.

D6700 was released from the factory on December 2, 1960 and was allocated to Stratford Depot in East London, but underwent acceptance trials before running light engine to its new home arriving on December 23. It was allocated at various times to Haymarket, Thornaby, Toton, March, Gateshead and Tinsley. It was repainted into rail blue livery in June 1969. After introduction of the TOPS (Total Operations Processing System) computerised numbering system D6700 became 37119 in 1974. It subsequently became a member of the 37/3 sub class in March 1988 and was renumbered 37350. Having passed to English, Welsh & Scottish Railways (EWS) at privatisation the locomotive was backdated to pseudo-1960s condition for the Toton Depot Open Day in August 1998 and was named ‘National Railway Museum’ three months later. It was withdrawn on the December 1, 1999 and was presented by EWS to become part of the National Collection.

For more details, including pricing and availability, visit the Locomotion Models website.