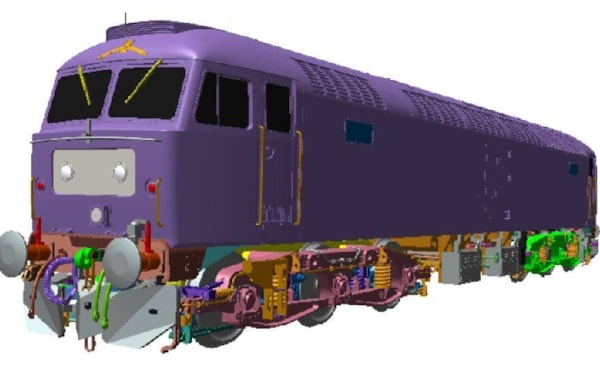 In response to customer demand, HELJAN is now working on an all-new Class 47 in ‘OO’ gauge. The model will build on the research and design work undertaken for our new ‘O’ gauge Class 47, which is currently at the tooling stage.
While our older model remains a firm favourite with ‘OO’ gauge diesel era modellers, the tooling is no longer fit for production and in the years since it was first released, technology for features such as DCC sound and lighting has moved on rapidly. Our new ‘47’ will make the most of these features with LED lighting, controllable lighting features and ample provision for DCC sound using the latest decoders.

With several sub-classes and myriad detail variations across the class over a career of almost 60 years (and counting), our models will reflect the complex history of Class 47 with a wide range of authentic differences according period, livery, sub-class and individual locomotives.

We plan to release models in phases over the coming years, starting with Class 47/0s for the BR green and BR blue eras and Class 47/0s, 47/3s and 47/4s for the 1970s, 1980s and 1990s. Future releases will cover other popular versions including the ScotRail Class 47/7s, refurbished Railfreight Distribution and Rail express systems (Res) locomotives with cutaway bufferbeam cowling and more contemporary machines depicting locomotives still in main line service.

All major liveries will be covered, as well as numerous special liveries, ‘one-off’ variations and unofficial embellishments according to customer demand.

Detailed design work is in progress and the first releases are expected in 2021.

More information on planned releases, detailed technical specifications, prices and expected release dates will be announced as soon as they are confirmed.
* CAD shown is O gauge model.