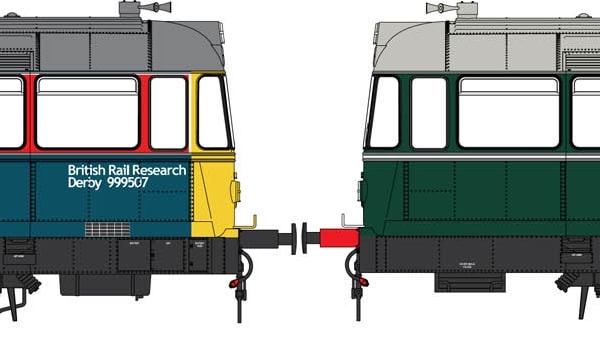 In response to demand from customers and retailers, Heljan is reintroducing the Waggon & Maschinenbau (W&M) diesel railbus and Class 14 0-6-0DH, along with new versions of the Class 07 0-6-0DE shunter and Class 17 'Clayton' Type 1 diesel. As well as all the most popular liveries on each class, there are a few new versions and some surprises that will raise an eyebrow or two!

Last produced in 2012, these German-built vehicles were the first and most popular of Heljan's family of lightweight BR diesel railbuses. Almost a decade after their last appearance, the new production run will feature small improvements to bring them up to current standards. LEDs will replace the previous grain-of-wheat bulbs, but the 21-pin DCC decoder interface has been retained. Improved decoration will also set these models apart from their predecessors. Seven versions are in preparation with a Suggested Retail Price of £179 each (£189 weathered editions).

This popular little Ruston & Hornsby 0-6-0DE has been the subject of two previous production runs since 2018, but demand continues to be strong for BR, industrial and preserved versions. This new batch includes representatives of all three sectors, plus a British Army green locomotive inspired by the similar Ruston-built locomotives used on internal railways such as the Bicester Military Railway. Please note V1 models are vacuum-braked 'as built' locomotives. V2 models feature high-level air pipes and compressor compartments. Seven versions are in preparation with a Suggested Retail Price of £179 each (£189 weathered editions).

Another model that has been out of production for a few years is the ever-popular Class 14 0-6-0DH (produced courtesy of Hatton's Model Railways). Again, demand continues to be strong for BR, industrial and preserved liveries on these cult locomotives, which are probably now more popular than at any previous time in their varied career. Seven versions are in preparation, including a Western Region ballast train pack with four 'Dogfish' hoppers. Individual locomotives will have a Suggested Retail Price of £179 each (£189 weathered editions), with an SRP of £329 for the train pack.

The popularity of 'Clayton' Type 1s in model form continues to defy the reality of the ill-fated prototype locomotives. After the last batch sold through quickly in 2019, customers have been demanding more of these centre-cab diesels in OO. Six new versions are in preparation covering all the major BR livery variants, plus a bang up-to-date new model of sole survivor D8568 in its current BR blue livery with small yellow warning panels. Finally, there's a 'what if' livery that will no doubt create some strong opinions! Six versions are in preparation with a Suggested Retail Price of £179 each (£189 weathered editions).