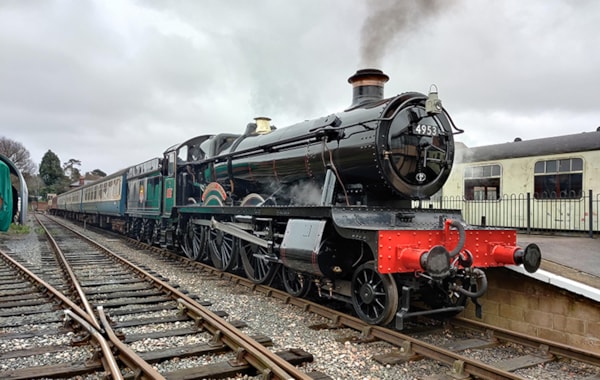 In a late change to its locomotive lineup for its forthcoming gala, the Severn Valley Railway's autumn Steam Gala is set to welcome a GWR 'Hall'.

GWR 4953 Pitchford Hall is expected to appear at the Severn Valley Railway’s Autumn Steam Gala between September 16 and 19, 2021. The news follows the unexpected withdrawal from service of one of the planned guests, LMS 6233 Duchess of Sutherland.

Pitchford Hall has been based on the Epping and Ongar Railway since 2012. The Hall class is considered by many to be the first true mixed-traffic locomotive. 4953 clocked up an impressive 1,344,464 miles during its working life, before being withdrawn and sent for scrap at Barry in 1963. It spent more than two decades at the location before being rescued, finally steaming again in February 2004. Pitchford Hall joins other guest locomotive, GWR 'Pannier' tank 9466 and members of the SVR’s home fleet for the four-day event.

Commenting on the event, general event manager Helen Smith said, "We’re thrilled that Pitchford Hall will be joining us later this month. This really is a splendid locomotive, and its unusual livery of BR lined black is very eye-catching. It’s never run on our line before, and we think it’s going to prove very popular. We’re sorry that Duchess of Sutherland won’t be able to join us for our special event, but like any other heritage steam locomotive, unexpected problems do arise.

The railway hopes to welcome 6233 in the not-too-distant future. Meanwhile, SVR head of engineering, Martin White, explained more about the issues affecting 6233, "The locomotive has been undergoing some extensive repairs and maintenance at its base in Ripley, Derbyshire. Quite late in the work schedule, a problem was identified with the driving-wheel axle boxes. Some of the metal bearing surface had cracked and become loose, necessitating replacement. Unfortunately this is not going to be completed in time for the event.”

Day rover tickets are pre-bookable at Severn Valley Railway website or can be purchased on the day.