GWSR appeals to supporters for help on embankment repairs 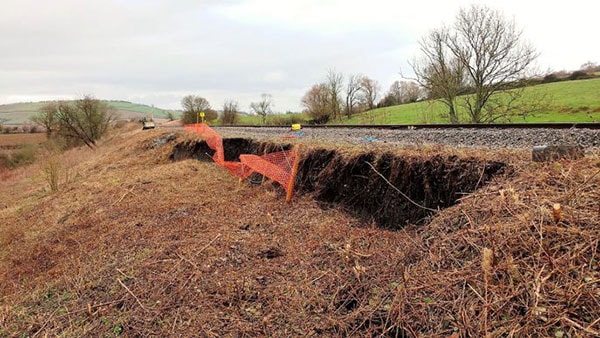 The Gloucestershire Warwickshire Steam Railway (GWSR), which operates steam and heritage diesel trains over its 14-mile line between Cheltenham and Broadway, has launched an emergency appeal for help from supporters.

Thanks to an embankment slip and the closure of the line because of Coronavirus, the railway is unable to fully fund the necessary civil engineering work to repair the damage.

Work on repairing the slip, which is about half a mile south of Gotherington station, is already underway thanks to a substantial contribution from the railway’s supporting charitable group, Gloucestershire Warwickshire Railway Trust (GWRT).

But the problem has rapidly escalated because, based on Government advice, the line has been shut until further notice. It also means cancellation of special events such as ‘Wartime in the Cotswolds’ and the ‘Cotswold Festival of Steam’, both of which attract thousands of visitors.

“Standing at the top of the affected embankment, we are in every sense staring into a black hole that is fast sucking in cash,” explains Richard Johnson, voluntary Chairman of GWSR Plc. “We can’t halt work on the slip, which has turned out to be more severe than originally thought. We believe it was caused by persistent heavy rain following a dry summer. The ground is continuing to move. If we halt works now to save money, the eventual repair cost will be considerably greater than if work continues now.”

“Closing the railway means that money will very quickly run out and we are therefore appealing to supporters, shareholders and the public, who gain so much enjoyment from the operation of trains, to generously respond to our appeal."

The GWSR is offering a range of ways to support it through this crisis.  Full information is available on www.gwsr.com or on social media.