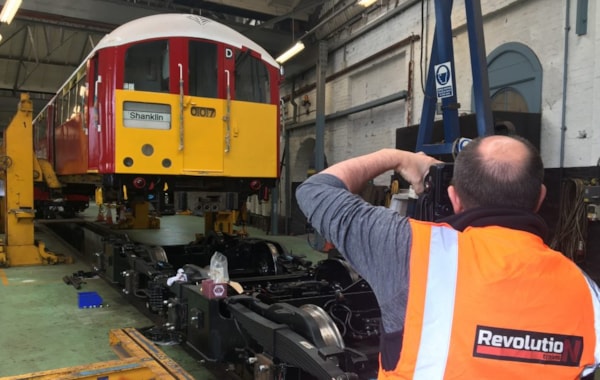 Revolution Trains is to introduce the first RTR underground trains available in N gauge with their forthcoming model of the iconic and distinctive 1938 stock.

Over 1100 cars of 1938 stock were built with additional cars built/converted during the 1950s to supplement the original batch.  The 1938 stock was primarily designed for “deep” tube lines on the Bakerloo, Northern, Piccadilly and Central lines though 1938 stock was also used on the East London sub-surface line during the 1970s. Despite being deep tube stock the 1938 stock regularly ran above ground particularly at the northern ends of the Northern and Bakerloo lines alongside sub-surface and mainline stock. The final 1938 stock was withdrawn from service by London Underground in 1988 following 50 years of service with a 4 car set preserved by London Underground.

Despite the long service on LU lines in 1988, 10 pairs of 1938 stock were sold to BR for future use on the Isle of Wight. This saw the 1938 stock slightly modified for use on the IoW where they saw a further 30+ years of service with the final sets withdrawn in January 2021.

Several sets have been preserved and Revolution hope to support the preservation efforts with sales of the models.

The plan is to offer sets in original LT red, Network SouthEast and Island liveries.

Revolution's model is undergoing final CAD corrections and once those are complete the order book will be opened. This is expected to be late Q4 2021.  The model will feature highly detailed bodyshells, separate flush-glazing, moulded interiors with working head, tail and saloon lighting.

Revolution Trains would like to thank South Western Railway and TfL for their assistance and support.