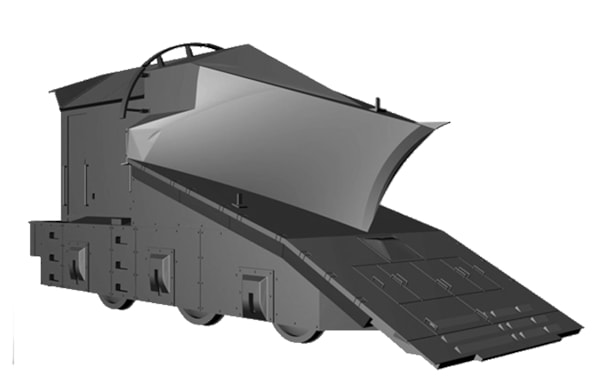 Announced at the World of Railways Virtual exhibition, Flangeway has announced that in partnership with Dapol their latest new product sees them expand into O Scale with their first ready to run model.

The companies OO Gauge Independent Snowplough has been widely received since its launch many years ago and its subsequent reruns. With the rise of O Scale ready to run in recent years, it is the natural progression for Flangeway to take and so they are pleased to make the next step in their range development.

Dapol are also pleased to announce that this will become a UK manufactured product and are extremely proud of the fact that the production will be moved to the UK once the initial release has been delivered.

In another quirk to the project, all of the design work has been undertaken by Dapol’s Apprentice CAD Engineer, Ben Davies who has undertaken the work alongside his daily studies.

Richard Barnett from Flangeway said: “We are extremely proud that we are able to bring this product to market. It has been much requested for a while now and with the encouragement from our friends at Dapol, the opportunity arose to develop this new product. We are particularly proud that we are helping to develop UK skills and assist in re-growing the UK manufacturing industry.”

Joel Bright, Dapol MD said: “We are very excited about this development, not only because Flangeway have put their trust in Dapol to bring this model to fruition for which we are exceptionally grateful, but it also marks a milestone in that this project is the first ever we have ever fully designed and drawn up from our base in Chirk. We hope this signifies the first of many.”

All CAD work is now complete on the model which will now enter the tooling stage with a view to bringing the Snowplough to market during 2021. Flangeway’s sister business, Footplate, has now opened expressions of interest which can be registered via the website.

Built in the 1960s on modified tender frames from LNER steam locomotives, British Rail created around 40 of these large drift snowploughs, some of which continue in service today with Network Rail.

RRP is expected to be around the £95 mark with the initial variants to feature popular liveries including; Scottish, Network Rail and 1965 versions.