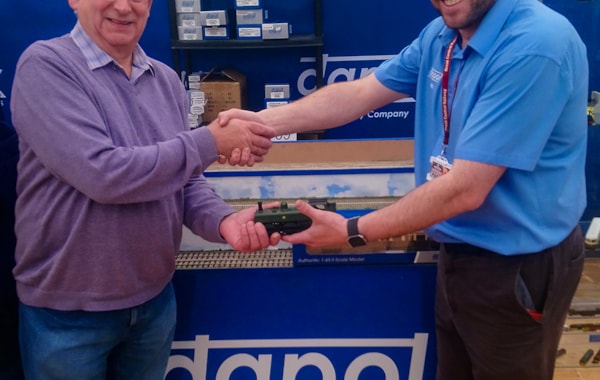 Dapol Ltd has donated to March and District Model Railway Club's dementia model railway project, designed to help those affected by the disease and raise awareness about the challenges of those living with the condition. In a ceremony held at the Great Central Railway's Model Event, held last weekend, Neil Morrlle, Marketing Manager of Dapol Ltd. presented Keith Sharpe of March and District Model Railway Club with a GWR Autocoach and GWR 64XX 0-6-0PT, both produced by the manufacturer. Commenting on the donation, Mike Wyldebore, Club Secretary added "There's an increasing number of people who are living around the March area suffering with Dementia and the disease robs many of those affected of their memories. Many had either friends or family connected in some way to the railways because of their impact in the March area, and simply asking them to operate or look at a model railway with its many objects brings back memories of their childhood or careers that they'd almost entirely forgotten.

"We're very grateful to Dapol for their kind donation and we'll make sure that it's put to good use on the new layout", said Mike.

Neil Morrlle added "It is our pleasure at Dapol to help support the March and District Model Railway Club's dementia model railway project. This is a project that we wholeheartedly believe in and have supported for some time. If donating a model can give somebody a precious moment of clarity or give someone their loved one back even just for a few moments it is more than worth it. Dementia is a horrible condition that afflicts more and more of us whether that be as a patient or as a carer. The work that the March and District Model Railway Club is doing is a fantastic way for the modelling community to do their bit to help soothe the impact of this disease on the lives of those affected by it. We would encourage everyone in the modelling fraternity to support them in their efforts in any way they can."

The club has received support from other manufacturers, too, with a supply of accessories ranging from track to controllers, baseboards and buildings. "We owe our thanks to the Cambridgeshire Council Voluntary Service (CCVS) too, who directed us to the right funding channel - Healthy Fenland, through Fenland Council. Their help has made the costs of the O gauge layout much more accessible", added Mike.

Discover more about March and District Model Railway Club on its website: www.mdmrc.co.uk