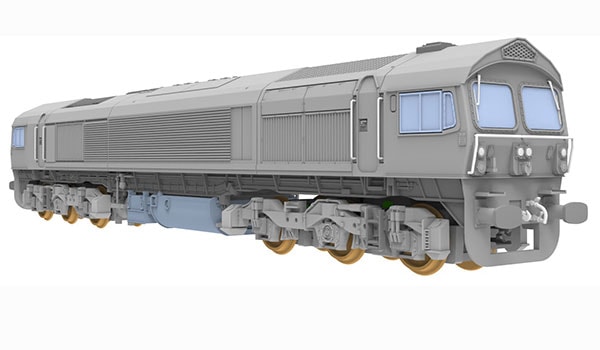 The Chirk-based manufacturer has announced a new Class 59 for N gauge modellers, which is already at the tooling stage.

This latest model incorporates Dapol’s re-designed chassis and electronics and the same 5 pole motor that is used in the N Gauge Class 50 and Class 68.

Dapol announced OO versions of the Class 59 earlier in the year, with pre-ordering still open. The models are anticipated to arrive by the end of the year.

Like the OO models, tooling will cater for all three sub-classes: 59/0, 59/1 and 59/2. Six liveries are to be produced, covering various eras for the class, in Foster Yeoman, Hanson, Aggregate Industries, ARC, DB Schenker and National Power branding.

The Class 59 is a Co-Co formation diesel locomotive and the first US-produced, privately-owned locomotive to operate regularly in the UK. The ordering of the first Class 59 was a result of quarry company Foster Yeomans dissatisfaction with the performance of the BR Class 56. The first 4 locomotives built by GM’s Electromotive Division were delivered to Foster Yeoman during 1986 and 59005 in 1989 proving very successful; one locomotive setting a new UK haulage record for a single locomotive of 4639 tonnes. Foster Yeomans rivals, Amey Roadstone Corp. (ARC) also ordered four modified Class 59s (59/1) as did National Power, who ordered six (59/2). GM invested in this initial UK success by extensively modifying the Class 59 internally to produce the Class 66, also hugely successful, within both the UK and continental Europe. Other than 59003 (which after return from loan to HHPI in Germany, is operated by GBRf), the Class 59 fleet is operated today by DB Schenker and Mendip Rail.