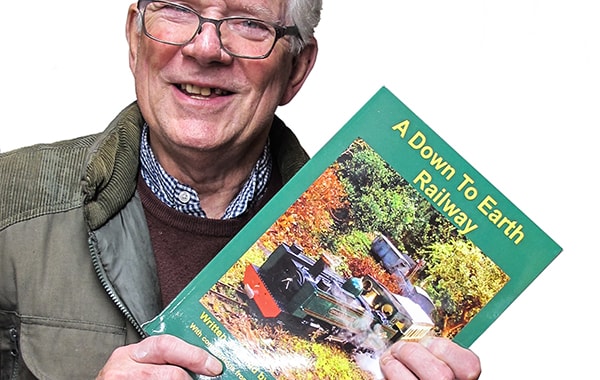 Garden Rail interview author Roger Mannion about his new guide to building a railway outdoors - A Down to Earth Railway.

Garden Rail:  Who is your book written for?

Roger Mannion: It's aimed at both people starting or in the process of going forward with an existing line. Despite this, It will still be interesting to more experienced modellers, especially the electronics and control methods chapters, but I'm mainly talking to beginners. If you are looking at a space in the garden that would be improved by a railway, this is the book to get you started.

GR: Do you think anyone could build a garden railway?

RM: Yes, I'm sure they can. You learn any special skills along the way because you make mistakes. I've certainly made plenty in the past, but it's all part of the learning process. In fact I believe it's that process that provides so much pleasure in this hobby.

GR: What scales does the book cover?

RM: No, we cover electric and battery power as well. Well-known author David Pinniger has contributed most of the steam coverage as my knowledge of this isn't as wide-ranging as his. Thanks to him we have a chapter devoted to steam, but while it might be what many aspire too, it's certainly not the only source of power.

GR: Aside from the locomotives, what else do you cover?

RM: I'm very keen to show the whole journey involved in building a garden railway. There are many decisions to take along the way – the first being how high up do you build a model? For many of us, the idea of bending down to something on the ground isn't very appealing. Should we build our line on supports or a concrete base? I've tried to explore all the options and give some advice.

GR: There are certainly plenty of things to consider when building a garden railway.

RM: Yes, there are. As I say in the book, it's your railway. Build it the way you want to do it, there are no hard and fast rules. Some people will tell you there are, but if I want to lay a circle of track on the ground and watch a train go round and round with a beer in my hand, that's fine.

GR: What's your background in the hobby?

RM: I'm an electronic engineer but have been working for Garden Railway Specialists for nearly a decade repairing models for people. At home, I have a OO model and am building an N gauge model for the grandchildren.

Working here, you see the models are bigger, they are easier to use and such good fun. Now there are a couple of American diesels in the garden. This book is very much my journey and bang up to date, especially the electronics explained and detailed inside.

A Down to Earth Railway is available to pre-order from Garden Railway Specials and will be on sale in the spring.