Bachmann surprised visitors to the Diesel and Electric Modellers United (DEMU) Showcase event held in Sutton Coldfield, with the news that it has developed all-new models of the iconic English Electric Type 3, Class 37 Diesel Locomotives.

Not only was this ambitious project made public for the first time at the show, but the first models were on sale during the event from the Bachmann Stockists in attendance.

Whilst Class 37 models have featured in the Bachmann Branchline range for the last two decades, these brand-new models owe nothing to their predecessors and have been designed from the rails up using original drawings, diagrams, site visits and surveys of real locomotives.

For those unable to inspect the models at DEMU Showcase themselves, a video presentation by Bachmann Europe’s Production Development Manager, Dave Parsons and Richard Proudman, the company’s Rail Brand Manager, premiered on YouTube, unveiling these new models to Bachmann customers and consumers around the world.

Highlighting the history of the project, the technical specification of the models and the extensive tooling suite that Bachmann has developed to accurately model much of the 309-strong fleet throughout their working lives – starting with the Class 37/0s and Class 37/4s – the video also looks at the first models which are on sale now.

Building on the impressive specification of the award-winning Bachmann Branchline Class 47, the new Class 37 shares many common features such as the five pole motor with twin flywheels, all-axle drive and electrical pickup from all wheels. Each axle runs in a pair of separate metal bearings, located in the diecast metal bogie towers which are fitted to the diecast metal chassis block. The Dual Fitted speaker system returns, offering authentic sound reproduction and this is pre-fitted to every model, whilst the Class 37 features a new ‘Yard Light’ mode, allowing red tail lights and/or marker lights to be displayed at both ends of the locomotive when operating on DCC.

Using the model on DCC also provides cab lighting and engine room lights at the push of a button, whilst analogue operation sees marker lights, tail lights and headlights - where applicable – all illuminate as desired.

Each Class 37 offered will be produced in three formats, with standard versions ready for use on analogue control out of the box and with a Plux22 DCC decoder socket for those consumers wishing to fit their own DCC decoder (Bachmann’s recommend Plux22 LocoDecoder carries the item No. 36-570A). SOUND FITTED models will also be offered and these versions are pre-fitted with the latest DCC sound decoder technology from Zimo – the MS450P22 sound decoder. SOUND FITTED DELUXE models share all the features of our SOUND FITTED models but with two additional innovations – both pioneered by Bachmann and for which the company received the Innovation of the Year prize in the 2021 British Railway Modelling Awards – namely the motorised radiator fan, this is driven by an independent motor that is operated as part of the sound project, and cab windscreen glazing which has undergone a specialist treatment to replicate the tinting seen on the prototype.

Furthermore, Bachmann has produced for the first-time multiple sound projects to be used in its SOUND FITTED and SOUND FITTED DELUXE models so that not only are the aesthetics of each model true to the individual locomotive being depicted, but so are the sounds. No fewer than four sound projects can be specified for any particular locomotive and these encompass the original Class 37/0s, original locos with thermostatically controlled fans, Class 37/4s and DRS-modified machines.

Like all Bachmann products, SOUND FITTED and SOUND FITTED DELUXE models will operate on both DCC and analogue control straight out of the box. When used on analogue control, a range of authentic sound effects can be enjoyed when power is applied, including a convincing engine start-up procedure before the model moves – whilst the motorised fans on SOUND FITTED DELUXE versions will also operate according to the sound project fitted to that particular model. 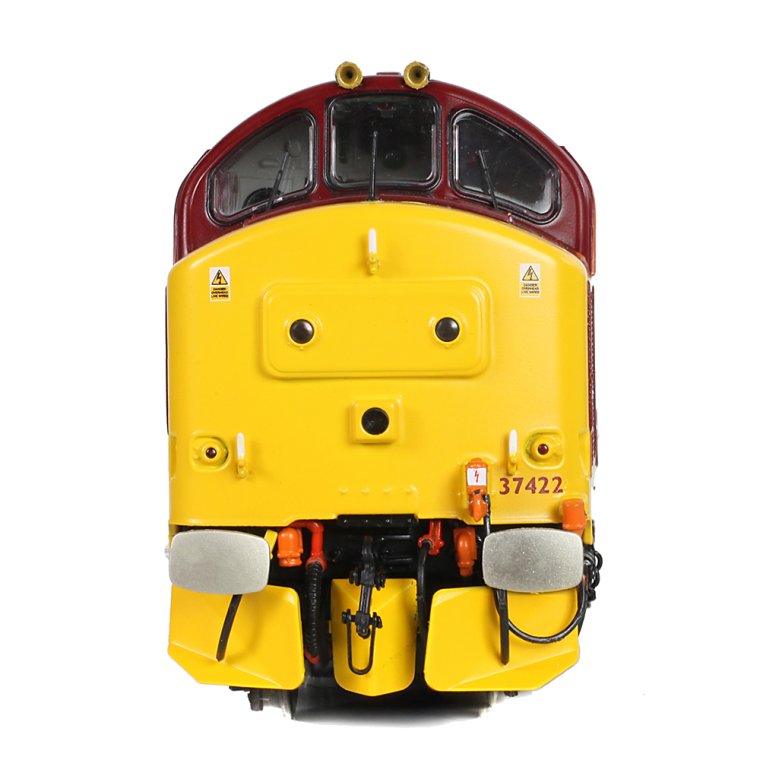 David Haarhaus, Managing Director of Bachmann Europe Plc said: “Like any long established company, Bachmann Europe Plc will continually invest and improve its product wherever possible or commercially viable. Incorporating the latest technology and processes to set the next baseline for our ranges. The overwhelmingly positive response we have enjoyed for our Class 158 and Class 47 models has given us great confidence to maintain our policy of perpetual development and improvement.”

David continued: “This wonderful all new Mk3 Branchline Class 37 arrives in high street stores as our company looks forward to the 190th anniversary of the Bachmann brand in 2023. We would like to thank all of our retail partners, Bachmann Collectors Club members and consumers for recognising the benefits of being part of our extended Bachmann family. This beautiful new “Tractor” is a perfect prelude to next year’s celebrations and will be available from your local model store next week.”

Further versions of the new Bachmann Branchline Class 37 are already in transit and will be arriving with Bachmann retailers this Autumn. Details of those models will be announced in early-August when the full Autumn 2022 British Railway Announcements is unveiled.