A fundraising target has been set for the cosmetic overhaul of the Isle of Man Railway's historic steam locomotive No. 5 Mona. The Isle of Man Steam Railway Supporters' Association intends to return the Beyer, Peacock & Co-built 2-4-0T locomotive to public display condition after languishing unused as a source of spares for nearly 50 years.

Constructed in 1874 to work on the Island's Port Erin line, the locomotive was decorated in 'Holly Green' with black and white lining. Using the same 3ft diameter boiler as the three locomotives delivered in 1873 for the Peel line, Nos. 4 and 5 would differ in having six inch higher side tanks and coal bunkers, providing more fuel for the more steeply graded and longer Port Erin line.

Among other changes to locomotives No. 4 Loch and No. 5 Mona over the previous three locomotives, an interesting, yet strange feature are the injector overflow pipes, which pass on the outside of the water tanks in front of the nameplates. 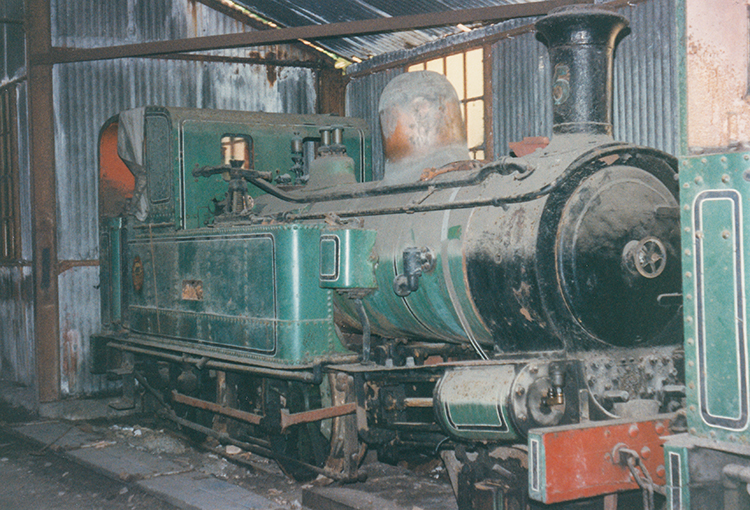 Not having turned a wheel in years, No. 5 'Mona' looked in a sorry state when photographed by Phil Parker at Douglas in 1993. Until as recently as 2020, the locomotive still contained asbestos.

Mona was purchased privately for preservation in 1978, but has remained unrestored on the Railway since, residing for twenty years in its old corrugated iron carriage shed at Douglas until it was demolished in 1999.

The locomotive relocated for a short while into the 'Infill Shed' created behind the Running Shed at Douglas, later to be enveloped in a sealed tent with sister locomotive No.9 Douglas at the back of the new carriage shed. No.5 Mona returned to Government ownership in 2012. The locomotive was partly dismantled in 2020 for removal of asbestos, and now awaits reassembly and cosmetic restoration to public display condition.

For further information on how to finance or get involved with the cosmetic restoration of Beyer, Peacock & Co No. 5 Mona, visit the Isle of Man Stream Railway Supporters' Association website.