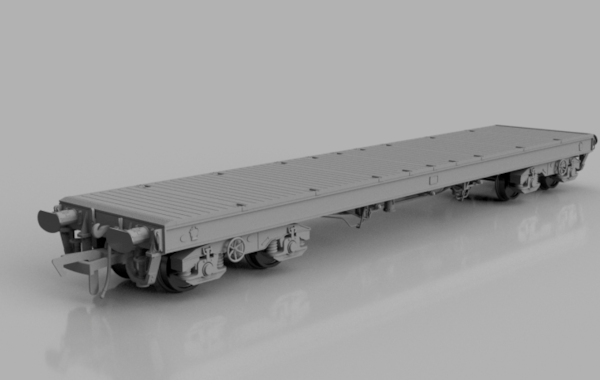 Unveiled at DEMU this weekend, the Peterborough model retailer is to produce its first RTR model in conjunction with Cavalex Models.

Trains4U is teaming up with Cavalex Models to produce models of the MOD KFA Warflat in OO scale. This model is to be exclusive to Trains4U, with deliveries expected during late summer/early autumn 2020. CAD artwork is complete and the model is expected to go into the tooling stage once the required number of orders is reached.

65 Warflats were built at Shildon for the Ministry Of Defence between 1976 and 1981, originally dual braked, with the TOPS classification PFB. They were converted to air braked only during the 1990s. Some received the PFA code before the K prefix came into use (KFB/KFA). These wagons are primarily used for transporting soft skin and light armoured vehicles, but can be used for a variety of loads, including bridges and even steam locomotives. KFAs are still in wide use by the MOD today and can be seen running in long rakes, or in smaller numbers, even ones or twos, mixed in with other common wagon types, such as Warwells, OCAs, VBAs or VDA vans.

The Cavalex KFA will be produced to the same high standard of finish as Cavalex's PGA wagon and will incorporate similar levels of detail, including:

Completed CAD artwork of the Trains4U KFA warflat, expected to arrive next year.

Gareth Helliwell, Director of Trains4U said “The KFA is a much sought after wagon in OO scale and a personal favourite of mine, appearing high on the annual polls and wish lists for several years. We decided to ask Cavalex to manufacture the KFA for us following the release of its PGA wagon, and the quality and commitment to accuracy they have demonstrated in delivering what is a highly regarded and popular model. We expect this wagon to be very popular, especially given the range of complimentary wagons and load options already available in the marketplace. As well as a fully detailed underframe, we are also aiming to replicate another key feature of the wagon, which is sun-bleached and weathered wooden decking. The wood quickly faded and marked, and we feel that this will add to the realism of the finished product.”

Two liveries are announced for the initial run, with four different running numbers available in each livery.
• PFB in Olive green with green jacks – suitable for 1980s and early-1990s

The wagons will be priced at £35.00 each and can be pre-ordered through Trains4U.com or by contacting the shop directly.