With first EP samples shown, the manufacturer reveals its project to produce the 'Siphon G', as used for the transportation of milk, mail and newspapers for over 50 years.

Accurascale has announced the O.33 diagram, the BR(W) O.62, the O.59 and M.34 conversions, and the BR Newspaper Van conversions of the O.62 (NNV) family of 'Siphon G' bogie vans in 4mm:1ft scale. The GWR-designed diagram O.33 'Siphon G' was a widely-travelled stalwart of the network. The history of these vans is varied and very interesting, venturing from providing transport of milk for the GWR, to serving as ambulance coaches during WWII. Their service continued into nationalisation and parcels workings, working into the BR blue era on parcels and newspaper trains, as well as departmental duties into the mid-1980s.

Accurascale has produced a comprehensive tooling suite to cover 15 different versions of the vans. The first run of its 'Siphon G' models covers examples from the entire operational period of the prototypes, from July 1930 through to the early 1980s and feature a selection of liveries carried by the versatile vans.

Accurascale has identified minor fit issues that need to be resolved, as well as erroneously fitted (or not fitted) parts for some of the builds. It is said to be looking at options for the provision of close coupling, as the positioning of the bogies didn't allow for the fitting of kinetic couplings, or to bring the NEM pocket deeper. Traditional tension locks are a little ‘leggy’, although they will still be provided as standard fitting, while further updates are expected on its solution in the New Year, along with decorated samples. Delivery of models is expected in Q1 2023.

Liveries modelled in the first production run include:

Even within these livery styles, there were several variations, and Accurascale says that it "has sought to replicate these where possible." 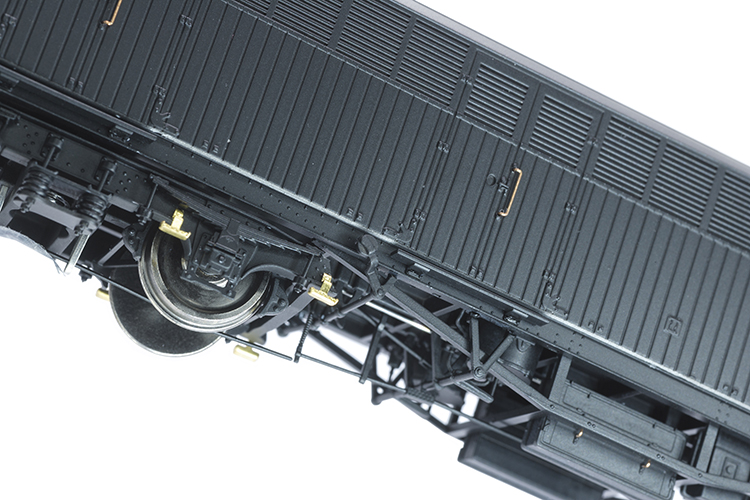 Extensive use has been made of metal parts to add to detail levels, the footsteps carrying diamond tread pattern. 26mm axles run in brass bearings to enable a smooth ride. Accurascale commented, "Extensive areas of piping and rodding have been added to the underframe to improve the appearance of the models and the various cabinets even feature separately fitted wire handles."

The O.33 can be recognised by bodyside top vents, plain roofs and plain ends, with the wartime Casualty Evacuation Train/US Ambulance Train Ward Car conversions adding roof-mounted water tanks, end steps and handrails, plated over vents and the addition of small windows. Upon conversion back into service stock as O.59 and M.34 diagrams, the O.59 is broadly identical to the O.33 pattern, but with roof-mounted ventilators, whereas the M.34 retained an appearance broadly similar to the wartime Ward Cars, but with the roof-mounted water tanks being removed.

The BR-built O.62 diagram retained the look of the O.33 diagram, but added eight sliding vents to the lower bodysides and the later conversion of these vehicles as NNVs saw various vents being plated over on an ad-hoc basis, and the addition of Electric Train Heating apparatus and external emergency lighting points. Across all diagrams, the positions of underframe cabinets varied in size and position, as well as two types of vacuum brake cylinder positioning and two styles of handbrake lever being fitted, depending on the layout. Westinghouse brakes were even fitted to the US Ward Cars. At the van ends, gangways varied slightly in style, with some vehicles being fitted with passenger communication leads, often in varying positions.

With so many diagrams, and variations between prototypes, Accurascale has said that careful reference to photographs was required to bring out the details, as well as visiting existing examples where possible, or relying on heritage railway volunteers to aid Accurascale in their research. Accurascale has thanked among others, John Lewis and Mike Romans, the Gloucestershire Warwickshire Steam Railway at Toddington, as well as the Buckinghamshire Railway Centre at Quainton; both of whom hosted survey visits. In addition, Hugh McQuade at the Severn Valley Railway provided some valuable measurements.

For further details and pricing, visit the Accurascale website, or see your local stockist.

Accurascale should do well out of this model, a consistent high performer in polls. The previous RTR attempt was Lima's, and while this was not a bad body tooling for it's day, the underframe was crude and completely inaccurate B1 BR bogies were fitted. Many modellers will, like me, have worked them up a little with new bogies and detailing, but ultimately one is trying to make as silk purse out of a sow's ear. Accurascale have build t a good reputation for accuracy, detail, and quality, and this might well be the first item I buy from them!