Accurascale has added two new running numbers to its Mk. 2B release programme, with two TSOs in West Coast Railways maroon livery, now available for pre-order. Its Mk. 2B coaches were announced in late August of this year, with a comprehensive list of BR liveries offered for OO gauge/4mm:1ft scale.

Tooling is complete, with first pre-production samples delivered. Corrections are said to be required based on its samples from the factory. Delivery is slated for Q3, 2022, however owing to global difficulties in production and shipping following the COVID19 pandemic and Suez issues, this may extend to Q4, 2022.

Accurascale commented, "Overall there is a wealth of detail, crispness and they capture the essence of the Mk. 2b very well indeed."

Following the mass withdrawal of the Mk. 2Bs following the 'sprinterisation' during the 1990s, many of these coaches found themselves out of work. There was a slight reprieve a few years later for a small batch of coaches, as the shadow South Wales & West franchise hired Mk. 2Bs for diagrams between Birmingham/Manchester, Cardiff/Bristol and Westbury/Weymouth. These services ran from 1996 to 1999, with the coaches later being picked up again by Wales & Borders for Rhymney-Cardiff-Fishguard services from 2001-2004. Several of these were transferred to the West Coast Railways rail tour fleet and remain main line registered.

Rail tours have become big business on the privatised railway scene, with companies like West Coast Railways operating a series of steam, diesel and electric-hauled trains every year across the country with mixed rakes of Mk. 1 and Mk. 2 vehicles. Accurascale's new vehicles will provide current scene modellers an excuse to run heritage diesel, electric and steam traction, with its two Mk. 2B TSOs in West Coast Railways livery.

Both coaches are perfect excuses to run heritage diesels such as Class 33, 37 and 47s, as well as 57s in West Coast livery, as well as classics such as BR green and BR blue. Each Mk. 2B coach will be sold separately. Interior lighting and a stay-alive function feature, with a wealth of separately-applied prototypical details, including etch metal parts, anti-prismatic glazing. 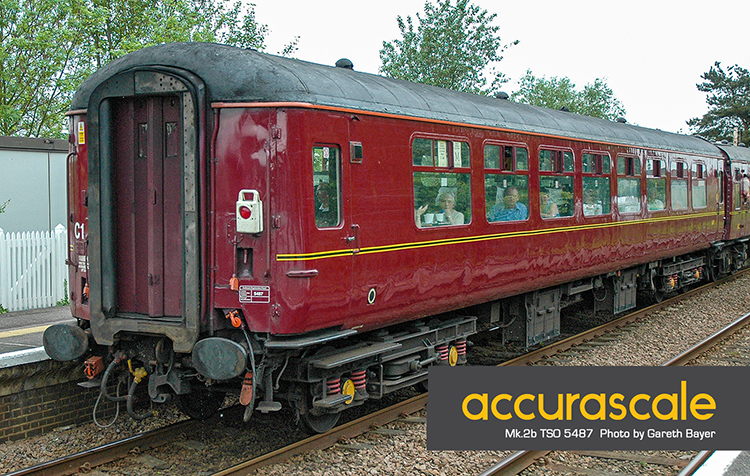 For further details including current pricing and availability, visit your local stockist, or see the Accurascale website.