With assessment of painted samples underway, the manufacturer reveals that first models are expected to arrive in stock mid-October, 2023, with a further special edition joining the ranks.

Accurascale has revealed that painted samples of its Class 37 locomotives have arrived for assessment and production of models is now underway. The manufacturer has added a further Class 37/4 to its 'Accurascale Exclusive' range of special edition models, available direct via the Accurascale website.

Commenting on the samples, Accurascale said, "Overall impressions of the samples received from the factory have been positive, with some fit and finish issues which always occurs with pre-production samples noted for correction. Samples of the four main types we are producing in the first run (The first 5 built, 37/0 with Scottish 'car' headlamp, 37/6 and modern Class 37/4) as well as Accurascale Exclusive 97301 have all arrived, been tested and feedback was sent to the factory for subtle tweaks and improvements."

Accurascale has identified areas for improvement on the roof, which requires better fit and finish, while horn grilles will be "tweaked" and the fan grille has been "enhanced" since these decorated samples were made. The position of the Scottish car headlamp, and further work with the factory to reduce its size is also said to have been undertaken to better capture their look.

The printing and paint is said to receive enhancements, as evidenced on the sector Class 37s with their poorer paint coverage in some areas. On the original batch of EE Type 3s, D6700-6705, additional work around the connecting doors on the front of the locomotives is required because Accurascale is unhappy with the fit and finish.

The manufacturer said, "Once implemented, these will form an unbeatable model of one of the nation’s most favourite diesel locomotives. Pre-order sales of the Accurascale Class 37 have proved beyond all expectations. So much so, that to avoid swamping the factory and to ensure delivery in a timely fashion, [we] will now have to batch produce them and deliver the entire first run over three deliveries."

The delivery schedule is as follows:

• Batch 1 is the Scottish Headlamp 37/0s and modern 37/4s. In production / scheduled to ship at the end of August from China / arriving in stock in mid-October.

Accurascale had hoped to deliver models in chronological order of when they were first announced, but the changed required per sub class dictate the delivery schedule, with the first batch the "easiest to progress into production" while further tooling work continues on the Class 37/6 and the blue and green Type 3s. 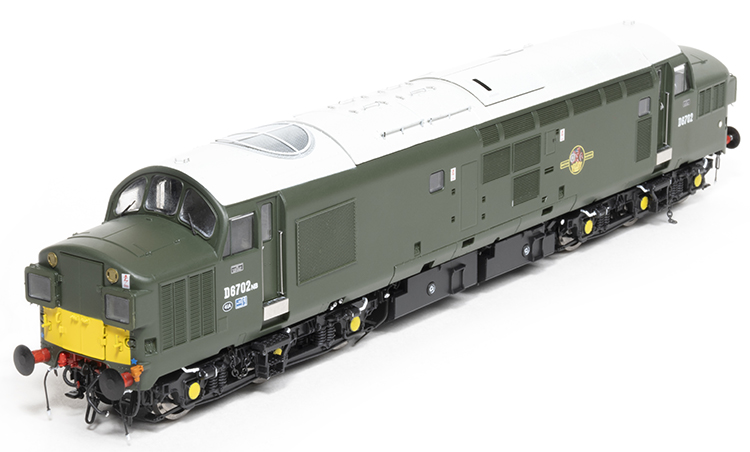 Production of the models is underway, with injection moulding of the first batch complete and painting about to start. The full batch of models offered in run one has a complete sell out on pre-order with Accurascale, with retailers reporting strong sales and sell outs too. However, an additional Class 37/4 has been added to the range for delivery as part of batch one. A previous modern Class 37/4 was ear-marked for a special commission that was not proceeded with. Accurascale has added it to its 'Accurascale Exclusives' range, offering it for sale direct via its website.

The model will represent 37402 in the retro classic livery of BR Blue Large Logo livery. Outshopped by Loram in February 2016, 37402 was the second member of the Direct Rail Services Class 37/4 fleet to be returned to the BR large logo scheme, after 37401 Mary Queen of Scots, which had led the way after being repaired and repainted into this iconic paint scheme by the SRPS at Bo’ness in late 2013.

37402 was released from Derby wearing non-standard numbers and with its Stephen Middlemore nameplates still in their ‘Compass’ livery position below the radiator, although these were fortunately both fixed at Kingmoor before the locomotive entered traffic a few weeks later, going straight into action on the Cumbrian Coast loco-hauled services between Preston, Barrow and Carlisle.

37402 became a regular on these popular workings and while they ended in May 2018, DRS had plenty of employment for its expanding fleet of heritage liveried Class 37/4s. This included Network Rail test, saloon and railhead treatment trains, the Greater Anglia ‘short set’ passenger services between Norwich and Great Yarmouth and Lowestoft, nuclear flask, engineers, railtours, stock moves, ‘thunderbird’, route learning and other duties. By the end of 2018 the sight of pairs of large logo 37/4s either top and tailed or working together became almost commonplace all over the network.

The detail configuration of this locomotive is identical to the manufacturer's other large logo ETH-fitted ‘tractor’, 37409, with the main spotting features of these DRS era machines being the revised LED tail lights, multiple-working socket on the nose, toughened windscreens, cab step and door kickplates, and – for machines that previously wore Compass branding – the plated central window on both sides of the body. Notably, 37402 was provided with a large Eastfield ‘Westie’ logo in the classic position, an embellishment never given to 37409.

For further details on these models, consult the Accurascale website, or see your local stockist.