Upon receiving the second batch of decorated samples of its Co-Co electric locomotives, the manufacturer confirms that production is underway, with delivery of models in Q3 2022.

Accurascale has confirmed that following approval of decorated samples of its Class 92 Co-Co electrics, production has been authorised. The models feature the various styles of Railfreight two-tone grey with 'Chunnel' blue roof that the locomotives have worn since introduction in 1993.

The manufacturer's model of 92003 represents the 'Dyson' as first delivered during the heady, optimistic times of the significant freight growth envisaged by the opening of the Channel Tunnel. With its attractive take on the then standard triple grey livery, but with the added splash of colour with the blue roof, just like the Eurostar at the time, they made for an eye-catching sight as they came into service.

Accurascale’s testing of the Class 92 is now complete and production has begun, with a delivery date of Q3, 2022. An 'early bird' price remains in place until January 1, 2022, though a price rise has been necessary. Accurascale commented, "With the sheer amount of technology and separate detail in these locomotives, a price increase to DCC ready and DCC sound-fitted models was required. This represents an amazing bargain when compared to other electric locomotives in the market. All orders placed so far and before January 1 will avail of the lower price, including deposits."

The main range is available exclusively from Accurascale, with further special editions produced for Rails of Sheffield and Kernow Model Centre. 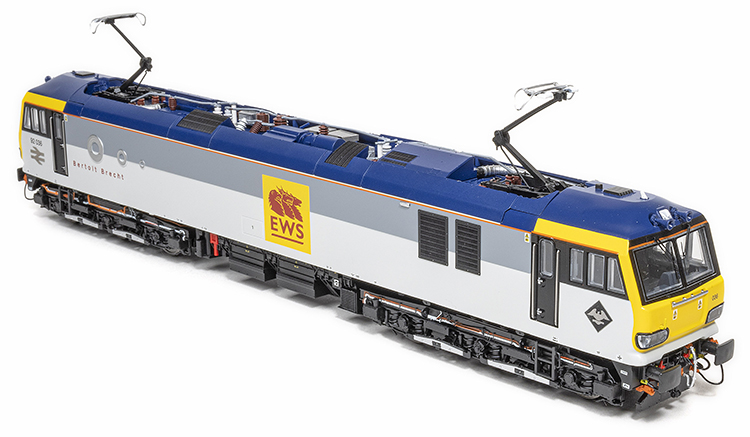 The Class 92s were born into a major upheaval to the railways, with privitisation gathering momentum. Soon various brandings were taking place offering new takes on the classic grey livery. RfD was quick to brand its locomotives in similar fashion to its Class 47s, 86s and 90s with 'Railfreight Distribution' script on each side with the addition of small RfD double diamond markings, as depicted in Accurascale’s model of 92022 Charles Dickens.

After a brief period in BR service, the locomotives found themselves with new owners. EWS took the Dysons under its wing with the purchase of RfD in the mid-1990s. With the locomotives being new, and the amazingly hard-wearing paint job done on the body shells by Procor Engineering when first built, many wouldn't need a repaint for many years. As the 2000s wore on EWS branded its locomotives in existing liveries with the large 'Three Beasties' vinyl, as displayed by Accurascale’s model of 92036, which is still operating trains in this livery today.

Six locomotives were allocated for 'Nightstar' sleeper train duties – a service which would never take off. The locomotives were eventually bought from Eurostar by Europorte, receiving 'Europorte 2' Tunnel branding as per Accurascale’s model of 92043 Debussy.

For more details, including current pricing and availability, visit the Accurascale, Rails of Sheffield and Kernow Model Rail Centre websites.