Loch Tat is a N gauge model railway set alongside a Loch in the Highlands of Scotland. It features a realistically-modelled water scene and makes for a superb backdrop for the procession of colourful trains which pass.

Having visited Scotland on many occasions, this layout represents Adrian Lambourne's attempt to show the splendour of the scenery to be found in the Western Highlands. Although not specifically based on a real location, Loch Tat is a layout that is firmly based on the West Highland line that was built by The North British Railway from Glasgow to Fort William and latterly on to Mallaig.

Utilising the main advantage of the smaller scale of N gauge, namely the ability to represent trains running through the scenery in a relatively small space, the area around a typical West Highland chalet styled station is represented, complete with Loch. Many of the buildings have been scratch-built, primarily using Plastikard, to represent the prototypes found in the area. Other buildings are heavily modified proprietory products. Trees, of which there are many, have also been hand-crafted to add depth to the scenery. Many of the scenes depicted represent events witnessed on visits to Scotland. 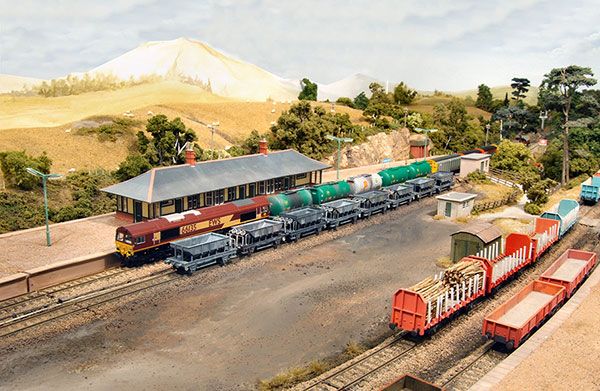 An unmistakeably Scottish West Highland line scene, with a station centrally-located between tracks which converge at either end of the platforms to a single line.

During the 1990s, Adrian had the pleasure to meet a gentleman who was building an N gauge layout based on Northern Scotland. It was housed in a holiday cottage over-looking Lochcarran and the Isle of Skye. During his many visits to assist him with this project, the idea of building a layout based on the area began to grow.

Although his modelling in the past had primarily been in OO gauge, Adrian felt that N gauge would be better suited to represent the splendour of the Scottish scenery. He started the project by collecting as much information as possible about the area. A trip to view the West Highland line between Glasgow and Fort William was arranged and many books and magazines were purchased. Having considered the option of modelling a specific location, he felt that although the rural nature of the line made this a picturesque layout to produce, the operational interest would not have been sufficient to keep his fellow operators and the public interested. He decided that a layout based on the principles and character of the West Highland line would be more appropriate. 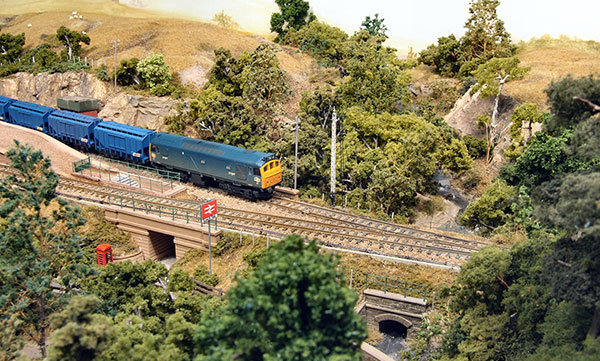 Pre-TOPS D7667 hauls a short rake of BRT two-axle bulk grain hoppers on scene. Small details like the stream passing beneath the tracks add to the rural feel.

Adrian decided that his layout would be planned and designed before construction started. Wiring diagrams were drawn out using Microsoft Excel and he chose to utilise eight different coloured wires and pre-printed labels so that it was easy to see what each wire related to various points on the layout. With only a few exceptions, he feels that this has worked well and has enabled him to quickly locate and remedy faults. 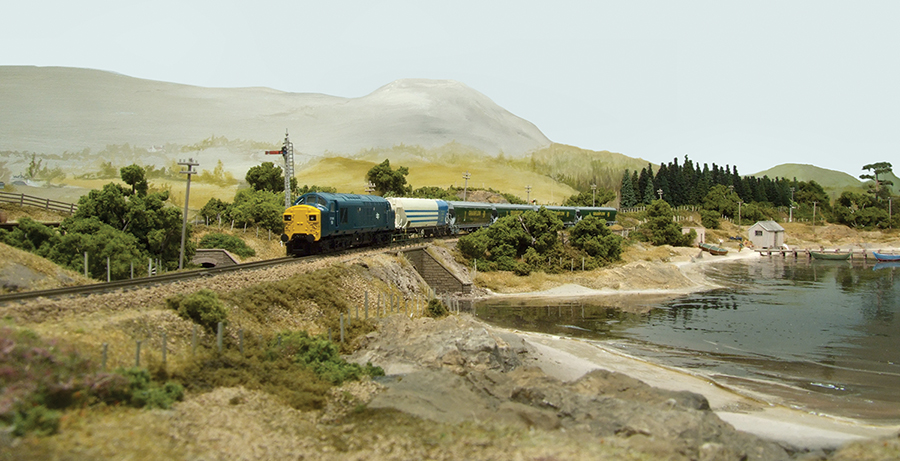 The wind gently laps the waters of the Loch as an un-identifiable split-headcode Class 37 rumbles its way along the meandering tracks.

The fiddle yard has four short spurs, two on the inner section and two on the outer. With the aid of removable ramps, this enables the team to run complete trains out of transportation cassettes, onto the layout avoiding handling of locomotives or rolling stock. The main advantages of the system are the lack of damage to stock and locomotives and the saving in time when setting up or knocking down the layout. 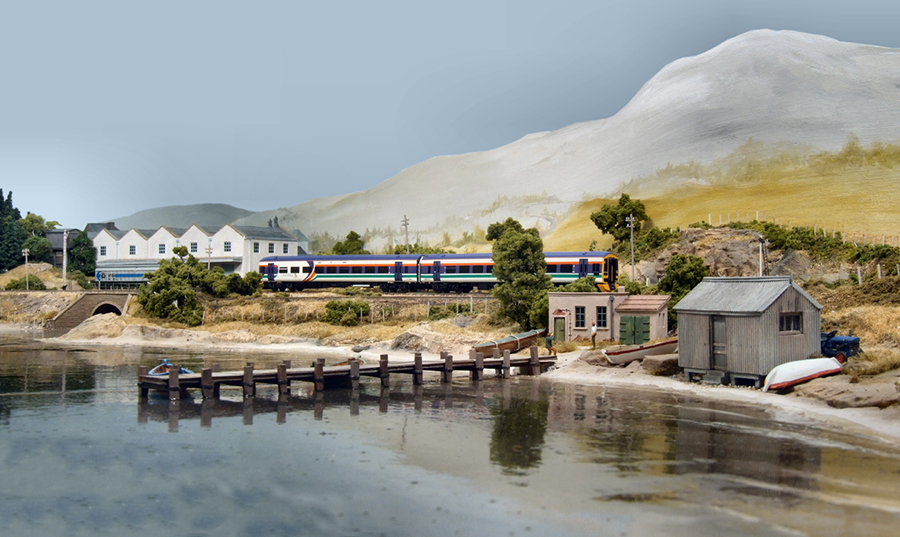 Adrian opted to paint his backscene. Using muted colours, he acheived a discreet effect, but conveyed the Highlands feel successfully.

Basic scenery is constructed with large amounts of expanded polystyrene, card, paper mache, wood glue and filler. Where rock faces were required, Adrian used Woodland Scenics rubber moulds and embedded the lumps of precast rock face into the countryside. The scenic area was then coated with varying shades of browns, greys and greens before detailed work began. The majority of the ground cover takes the form of static grass, rock debris and light undergrowth and utilises products from Woodland Scenics, Anita Décor and Heiki.

Trees, both farmed for commercial purposes and native, are a must for those wishing to model this area of Scotland. Adrian set about the task of getting together approx. six hundred trees with little trepidation. He bought large packs of basic fir trees sold by Heiki, then improved them by covering them in fine flock powder supplied by Anita Décor. He then built many trees using the Woodland Scenic tree armatures. When painted in subtle greys and covered in various quantities of Woodland scenic foliage clumps, these make acceptable birch trees which are a common sight along the railways of Scotland. Wire wound trees and seafoam were also used to add variety. Although Adrian was happy with his attempts at tree making, a visit to Rural Railways' trade stand at one of the exhibitions convinced him that he should also purchase some of the Scotch pine trees produced by 3M Models.

Two-part epoxy filler was used to represent the ripples and waves where the water hits the shore. He painted the area using acrylic paints, changing the colour so that deeper areas of water are darker than those nearest the shore line. White water was painted onto the surface where waves would break. Three coats of gloss varnish to add depth then followed. 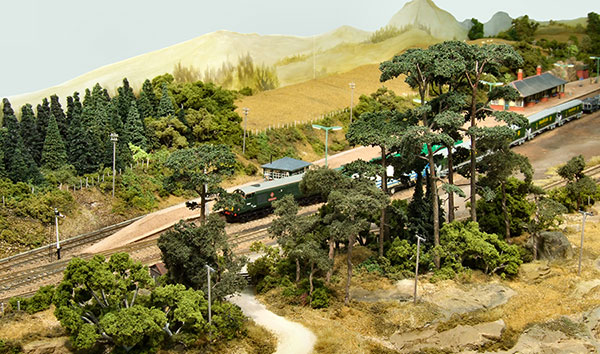 Trees play a large part in setting the scene of the Scottish Highlands. Tall pines tower high above trains and are usually underscale on models, but not here. Conifers and Birch trees complete the look.

It was always Adrian's intention to run his layout in a period when blue diesels and vacuum fitted freights were common. To represent the period properly, he would have to purchase and build many locomotives and rolling stock kits, so he made it his intention to build the layout first, then populate it with stock afterwards. As the layout developed, manufacturers in N gauge were beginning to produce models of prototypes that ran along the West Highland line, but not necessarily in his preferred period. This was too good an opportunity to waste, so he has collected sufficient stock to run the layout in BR blue or post-2000 eras. 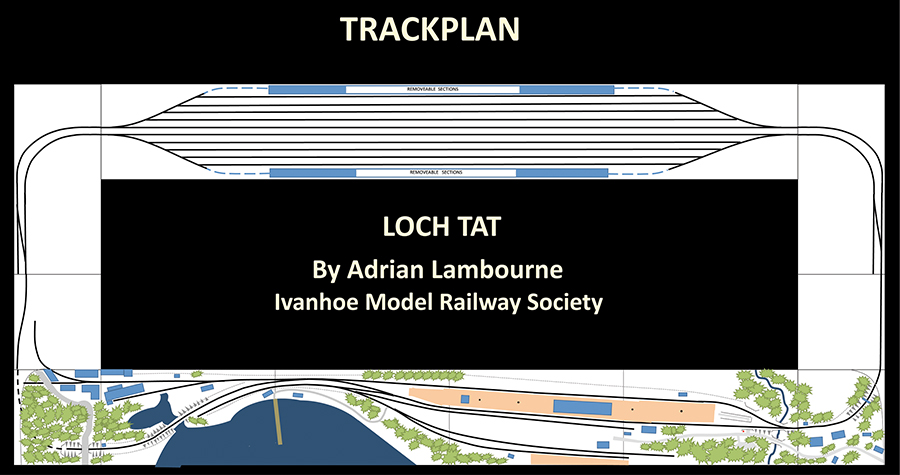 For even more model railway inspiration covering all gauges from OO gauge through to N scale, click here.