The challenge of re-inventing this exhibition layout for Simon Howard and his friends saw a transformation in its era too, from the end of steam to an imaginary BR blue diesel scenario.

It’s a warm summer Saturday in the ‘80s at Charwelton station. The local DMU stopping service has just departed with that familiar sound of the guard to driver buzz. The Newcastle – Poole cross country service passes through, heading south on its way to the coast. The normally quiet yard is a hive of activity as the weather-worn Quarry shunter comes to collect the waste ballast from recent engineering work for the short trip working up the branch to the quarry for disposal.

A horn can be heard in the distance from the next Speedlink service that will soon appear from under Church Lane Bridge, south of the station.

The vision above is our take of what could have been if the line had stayed open. In reality, the real station in Northamptonshire closed in the ‘60s after the decision was taken to abolish the line; one that is seen by many to have been short-sighted. If it had stayed open, it would be the ideal route for freight today with its larger loading gauge.

After closure and with the lines lifted, the station buildings were demolished and the island platform remained overgrown till the main road was lowered and realigned, resulting in the station overbridge being demolished to improve the access into the village itself. There isn’t really anything left today to say that the railway ever ran through this point. Some of the other railway infrastructure has managed to survive. Part of the loading dock, which is now covered in trees, along with some signal post bases and a couple of the back road over bridges. The old station and yard area is currently being developed into the Catesby Aero Research Facility and Science Park. The track bed leading up to Catesby Tunnel has been cleared and converted into an access road with the tunnel itself being converted into a state-of-the-art road vehicle wind testing tunnel to enable two miles of controlled atmosphere. A novel use I’m sure you will agree, and one that will save the tunnel for the future. 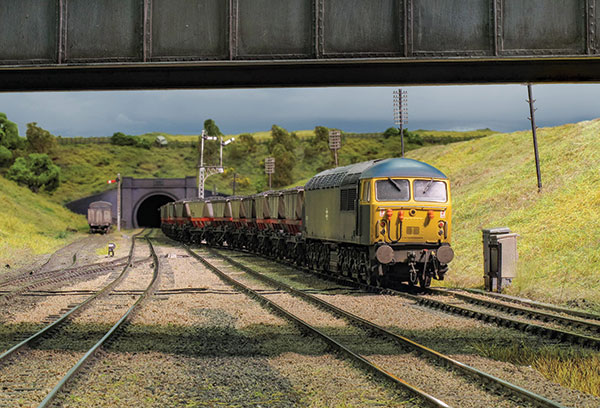 The layout was originally built by the Wolverhampton Model Railway Club and exhibited as ‘50/60s steam. During construction, club members made several site visits to take photos and measurements of the remaining structures and anything else that they thought might be useful. Construction started on the baseboards, which are made from 3/8in birch plywood to make a light but ridged structure. The scenic boards were built open-framed with chicken wire attached to plywood formers to create the surrounding landscape. Scenery was constructed using tried and tested methods and materials.

Track on the main running lines at Charwelton by the period they modelled was flat-bottom rail. At the time, no flat-bottom track was available off-the-shelf so the original builders had to construct their own, using dyed EMGS (EM Gauge Society) plywood sleepers, C&L baseplates and EMGS code 82 flat-bottom-rail. The points in the fiddle yard were made in the same way using flatbottom rail and two bolt C&L chairs. The points on the main lines were built using copperclad strip and Masokits etched-brass base plates. 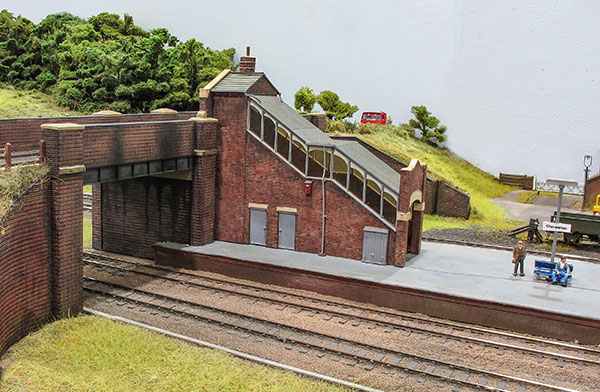 Control of the scenic section was done through the main panel using rotary switches to change points and change the frog polarity of the points and crossings. The signals used toggle switches along with solenoid motors with weights to create the bounce you’d see as a signal is returned to danger.

Fiddle yard boards were constructed with the same method of 3/8in birch ply with solid tops. They used Code 100 Peco track and Electrofrog points. Polarity is changed using micro switches with solenoid point motors mounted underneath the boards. These are changed using a stud and probe system via a Diode matrix to set the routes in to each of the 18 fiddle yard roads.

After the layout was put into its new storage, a plan was formed of what we wanted to do. Being BR Blue-era modellers, keeping the layout as a steam-era layout wasn’t possible as we don’t have any ‘kettles’, apart from in the kitchen! (well, one of us has some L&YR stock but we don’t talk about that!). 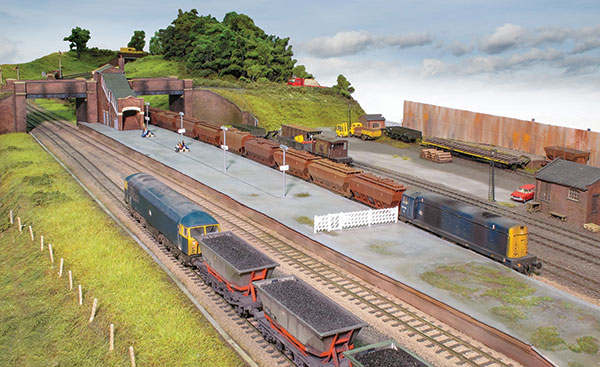 The list of things to do soon grew to include refurbishing the scenery, converting to digital control, making new control panels to enable the layout to be operated at both ends, researching and running prototypical length trains, plus solving any other problems that might appear as other work progressed.

After a couple of hours we had managed to set it up and plug in all the cables and as far as we could tell, didn’t have any bits left over. We sent the first locomotive round and it all seemed to work. Nothing major was found, just a couple of little issues appeared, mostly with the point and signal motors. It was decided to replace them with Tortoises point motors, and fit servos to operate the signals. We also tried to connect up the DCC controller to see how much work would be needed to change the layout to DCC.

What was expected to be an easy task presented a small but significant problem as all the control systems on the layout, controllers, points and signals all had the same common return that linked everything together. This common return also provided connections to the large capacitors for the fiddle yard points that were all controlled via a diode matrix, which sets up the routes to save anyone having to set each point on its own to provide the route. 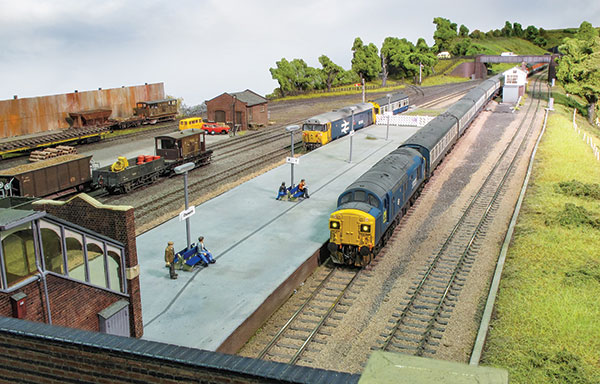 As we now had a deadline, the list of work was spit into small sections with each one of us taking on a task. Dave took on the scenery refurbishment, Andy took on the fiddle yard re-wire to convert the track to DCC and I was tasked with the scenic section re-wire for DCC, change the point motors and install the signal servos.

Dave set about refurbishing the scenery side of things. It consisted of removing the tired and faded grass, hedgerows and trees and replacing them with a mixture of static grass, new hedges and replacing the greenery on the trees and adding some more which you would expect to see in the intervening years between the '60s and the '80s. Another aspect was what to do about the station buildings? From research and looking at other stations around the network, it was noted that in quite a few cases the old waiting rooms and ticket offices had been demolished, the platforms resurfaced with Tarmac and some lights added. Paintwork on the remaining staircase was given a coat of grey, as could be seen at many stations around that time. Cable trough runs were added along the track, with cable runs out to the electric point motors and electric signal motors would have been installed. Lots of research was taken at all stages to get the look just right and, as you can see from the photos, Dave did a fantastic job at giving it a new look.

The plan for below the boards started with the DCC side of things. The layout was divided into two power districts, one for the front and one for the fiddle yard. Both of these were then split down further using NCE EB1s to create Up and Down sections for the fiddle yard and an Up, Down and Yard for the front. This is hoped to prevent the whole layout shutting down in the event of a short circuit caused by a derailment or something dropping on the track. 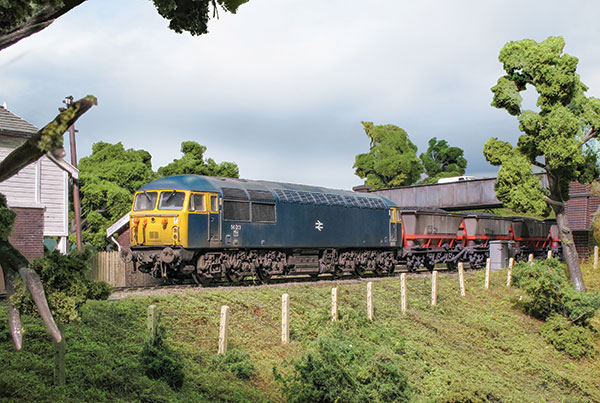 The DCC system uses a NCE 5A Power pro box for the main control connecting to a MERG Power booster for the fiddle yard. Handsets are a mixture of Pro cab and Power cabs connected via NCE Fascia panels bought from Digitrains. These are connected together using custom-made cables to enable us to place them where we need them. We estimated we would need four, but after the show at Doncaster this has shown that we need at least six on the inside and possibly two on the outside.

Point control is via toggle switches at the time of writing this article, but will be changed to the Megapoints system which will enable us to have a main control panel with all the point switches and indicators on it to show which way the points are set. There'll be a secondary smaller panel for the Up line drivers at the tunnel end that will have all the point LED indicators on it, but only the switches needed for the Up line loop and for the crossovers. This should reduce the amount of walking needed between the Up fascia panels and the main control panel and reduce the crowding that happens currently around the main panel. The Megapoints will also control the signals using servos and all this will be installed shortly. 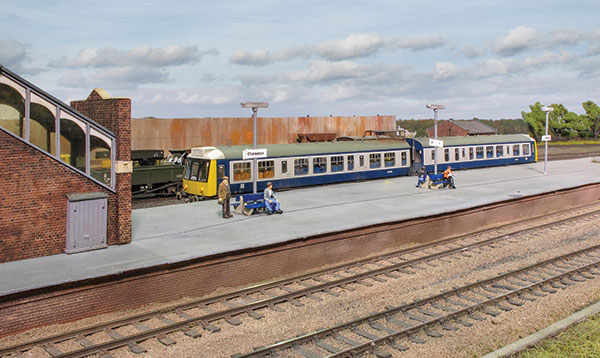 Rolling stock was always a worry when we first took on the layout as an 18-road fiddle yard, which has one road that is over 40ft long and takes a bit of filling with stock.

So we all took time to do a stock take of our collections to see what items we had, what was already detailed and weathered (as we already exhibit another couple of layouts that we run a lot of our stock on) and what items needed work to be used on the layout. The easiest way was for each of us to fill a spreadsheet in so that a full list could be seen and referred to when needed.

Using the spreadsheet, Dave was able to look at possible flows for the various rakes by using a mixture of working timetables from the '50s and other possible traffic flows that would use the line if it were still open. We now have a variety of flows that we run ranging from steels, cements, grain, Freightliners to rail tours, DMU stoppers and even DMU replacements, with more being added when new items roll off the bench.

All the stock on the layout is detailed and weathered using reference photos to provide a natural look. Nothing weathers the same in real life, so why would it be the same on a model railway layout?

Something we have been asked about at shows is what we use for couplings? The freight stock is coupled together using either 'Instanter' couplings or three-links depending on the prototype. Coaching stock uses a mixture of Kadees, Hornby close-coupling and the Bachmann moulded pipes to achieve close-coupling.

Locomotives are all detailed, weathered and DCC sound-fitted. Most have been renumbered and some re-sprayed. Again, all are done using reference photos to create a realistic look.

Detailing parts are from Shawplan, who provide a wealth of extras to make that locomotive more unique.

It’s always interesting taking on a layout that is already built. It has made us undertake research into a different line that none of us were familiar with. The research has been enjoyable and thrown up a few interesting facts and, at times, has had us scratching our heads to solve puzzles. Judging by the reaction from people on RMweb and on the layout's Facebook, Twitter and Instagram pages, it has been interesting for others as well, and given us a chance to chat with people who remember the station when it was open and also members of the Wolverhampton club who made the layout in the first place.

To read more about Charwelton, see the May 2019 issue of BRM. Download today from www.pocketmags.com/BRM.