John Kneeshaw's Bankfield Road layout is an example of what can be achieved in a minimum space in O gauge. 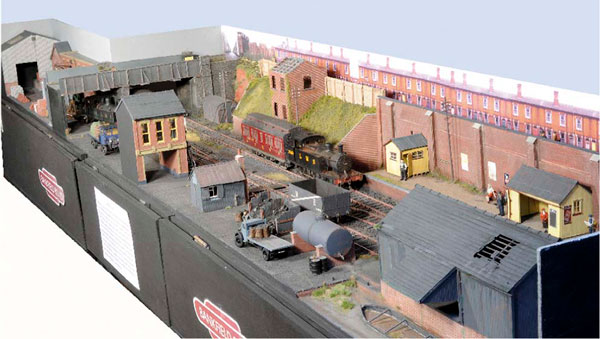 A few years ago John Kneeshaw spotted an advertisement, somewhere in the O gauge world, offering for sale a 9ft long exhibition layout. At the time the club’s 30ft long two-layer exhibition layout, Helmthwaite & Chapel Lane had just been finished (BRM November 2011) and although it was collecting bookings, they were for big shows like Warley and Alexandra Palace. He thought it would be nice to have a small O gauge layout that would appeal to the exhibition managers of smaller shows; and one that would be a lot easier to transport.
The advertised layout had been built and previously exhibited. He discussed the price over the 'phone and agreed to drive and have a look.

The layout in question had been stored by its then owner in his loft and consequently a fair amount of physical contortion and muscular effort were required to extract it to see what it looked like. It was pretty dusty, some of the buildings had suffered damage, and everything that wasn’t scenic was painted a bright blue colour. But on the plus side, it came with legs and it featured some good, well-modelled scenery. There was a small station, a canal basin and a factory siding, and it appeared to be complete. Unlike the other layouts John has been associated with, it wasn’t LMS, but you can’t have everything; and he thought that a little company conversion would be easy to accomplish. Money changed hands and the whole thing was crammed into his wife’s Land Rover for the drive home. 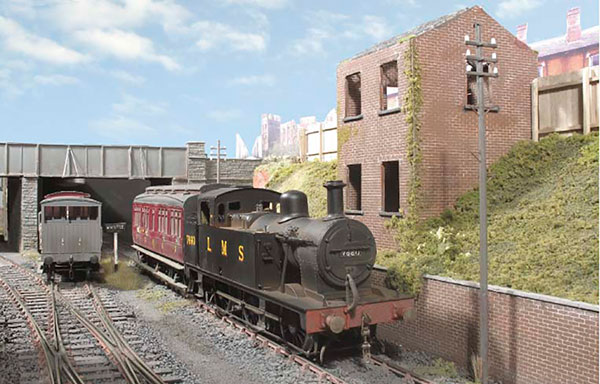 When John got it home he had a more detailed look. The original builder had developed a good design and had a very good scenic eye, but the more mundane things like how it fitted together, and how it ran, were less encouraging. The layout is built in three sections that lock together with dowels to fix the position and over-centre catches to lock the sections in place. One of the female dowel sockets was absent so he found a spare and replaced it. He then discovered why it had been removed; with it in place there was a 2mm step in the trackwork between sections. He removed the dowel socket and clamped the sections from below with a ‘G’-clamp. John decided it would be a good idea to start a list of remedial works. 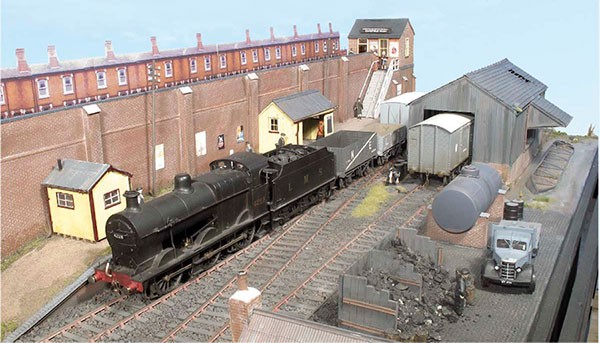 LMS 4F No. 4228 hauls a short rake of wagons on a local freight. Right, the Bedford coal truck awaits its next load.

One of the easier improvements made was to take all of the visible areas that had been treated to the rather bright blue paint job and to recover it all in a grey undercoat; a colour much better suited to the industrial West Midlands than a Mediterranean sky blue. The layout had never before been blessed with a backscene apart from plain blue. Jackie, his wife, took over this part of the rebuild and spent ages searching the internet for photos of terraced houses that didn't include uPVC windows, modern cars and satellite dishes. She also took photographs of a derelict factory site near Nottingham station that she modified to form a corner of the backscene, but she never did find a suitable row of terraced houses.

John came across Peter Smith of Kirtley Models at a Gauge O Guild show. Peter has a range of 7mm scale Victorian and Edwardian backscenes on A4 card. One of these sets is a pack of terraced houses. They needed their terrace to be about 5ft long and wanted to decrease the size of the buildings to create an illusion of depth. Jackie spent a number of hours fiddling with scans of the Kirtley Models scenes in Photoshop, and by cutting and pasting and resizing she built up a long terrace in which the houses didn’t repeat in the same order, and which exactly fitted the vertical height of the previous backscene board. 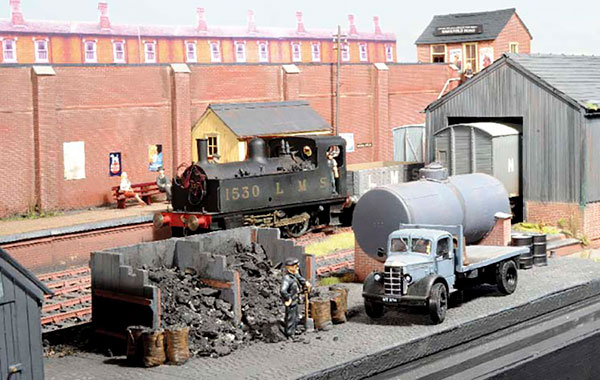 LMS (ex-MR) 0-4-0T 'Pug' No.1530 is caught shunting in the yard. The lamp irons make useful hooks for stowing the drivers' bicycle.

Buying a ready-made layout is a quick way to getting started, particularly if it's something you like the look of, but be prepared for light restoration at the very least, or re-wiring, scenic alterations and baseboard changes in the worst case scenario. Ensure what you pay for a second-hand layout takes the above considerations into account.