'Albion Metals' is a small rail-served scrapyard set in the industrial West Midlands, loosely based on operations at Bilston. This yard sent out scrap by rail to various locations and was shunted by a Class 08 or occasional main line locomotive. 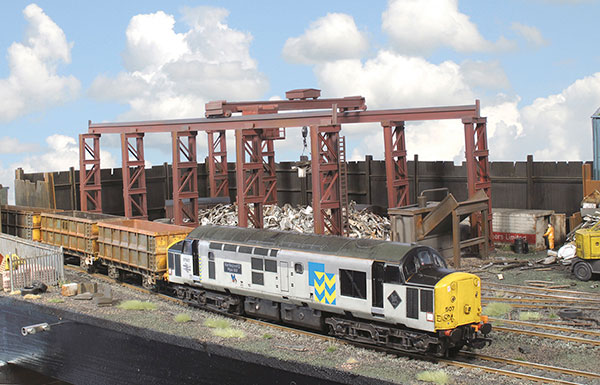 Class 37507 Hartepool Pipe Mill reverses its rake of hoppers to be loaded with scrap for melting.

Albion Metals is a small rail served scrapyard set in the industrial West Midlands. It is very loosely based on operations at Bilston which was situated at the end of a long siding from Wednesbury Yard. This yard sent out scrap by rail to various locations and was shunted by a Class 08 or occasional main line locomotive. The layout is set in 1990 during the period when BR blue was still around, the new sector liveries were being introduced, and a large variety of locomotives and wagons were still in operation.
During the period  modelled, several yards were in operation including Tyseley, Small Heath, Kingsbury and Handsworth, the yards at Tyseley and Kingsbury using industrial locomotives to shunt their sidings. A simple track plan is used with two exchange sidings and two loading sidings, and the use of an industrial shunter to move the wagons around the yard. 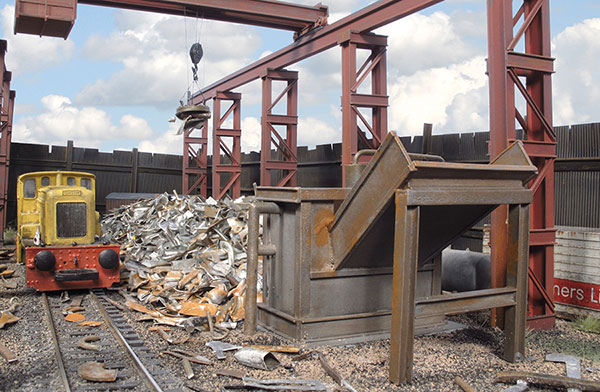 Shunting of wagons on site is dealt with by the yellow resident 0-4-0 shunter. 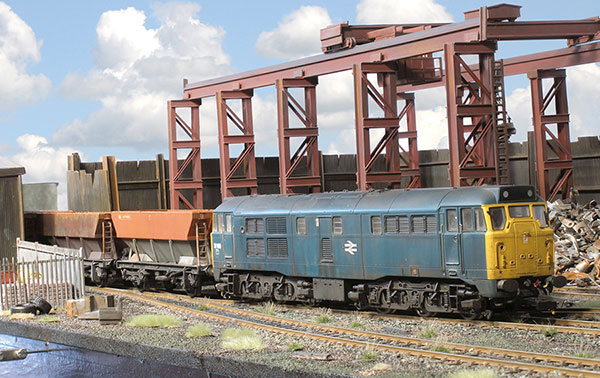 31168 idles with a short rake of wagons. Note the intricate framework of the gantry behind.

The layout is powered using a Gaugemaster unit and hand-held walkabout controller. The controller has a plastic hook glued on the back to allow it to be hung over the backscene board when not in use. Power between the two boards is kept very simple and uses wire leads screwed into terminal blocks. 'Albion Metals' was not built for general exhibitions and sits at home on a small table. When it attends local shows it sits on adjustable trestles available from Screwfix. 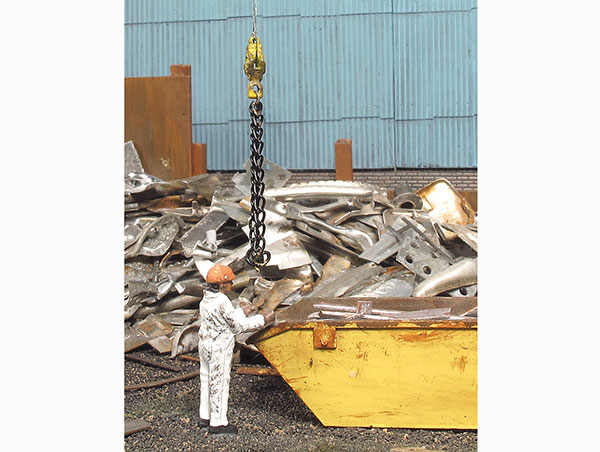 A skip loaded with precious metals is being hoisted from the cutting site to storage.

N gauge ballast was used on the track, and Woodlands Scenic cinders and Carr’s ash ballast for ground cover. Siflor tufts and various scatter powders and ground foam were used for weeds, all glued down with PVA glue. The rails were painted with rust coloured paints and the whole trackwork flooded with lots of thinned down black and ‘grime’ paint. The two small low relief warehouses were built from Wills sheets on card shells. The small builder’s merchant shed is embossed plastic sheet on a card shell. Security fencing is from the Knightwing range, and the corrugated iron scrapyard fence is embossed plastic sheeting glued to assorted Plastruct girder uprights. This was sprayed black with Halfords car primer then washed over with lots of rust paints.

Scrap yards make interesting modelling projects if you like weathering and creating rust effects. The success of your model however will largely depend on two key elements: the scale of the objects and materials you use to make the scrap and the arrangement of your trackplan.