Recent years have seen a considerable expansion in the number of companies offering colour light signals. Here we distil the facts on each to make your choice easier.

Until the last decade, if you wanted a colour light signal for your layout, you typically had to turn to continental suppliers for working examples or make do with non-functional plastic kits. In addition, these only bore a passing resemblance to the look of British signals. However, with the growth of DCC prompting a wider use of electronics on layouts, there are now numerous manufacturers offering correct UK-outline signals to suit a range of requirements and budgets.

Of all the colour light signals available, it is perhaps those offered by Absolute Aspects that are the most impressive in terms of specification. As this three-aspect O gauge signal with feather indicator demonstrates, considerable thought has gone into the electrical connections.

Of the main ready-to-run model manufacturers, only Dapol has thus far committed to producing working colour light signals. It announced two-, three- and four-aspect designs some time ago, and still in development, these are due to appear in both 2mm:1ft scale (N gauge) and 4mm:1ft scale (OO gauge) at some point. Otherwise, output of a scale appearance from the major suppliers has been limited to dummy offerings, such as Peco’s 4mm:1ft scale twin-pack of three-aspect signals and the single four-aspect signal produced by Bachmann as part of its 4mm:1ft scale Scenecraft brand.

Turning to smaller manufacturers, the ranges on offer are happily much more comprehensive, including main signals and, on occasion, other essentials like ground signals. Taking each supplier in turn, their output can be summarised thus: 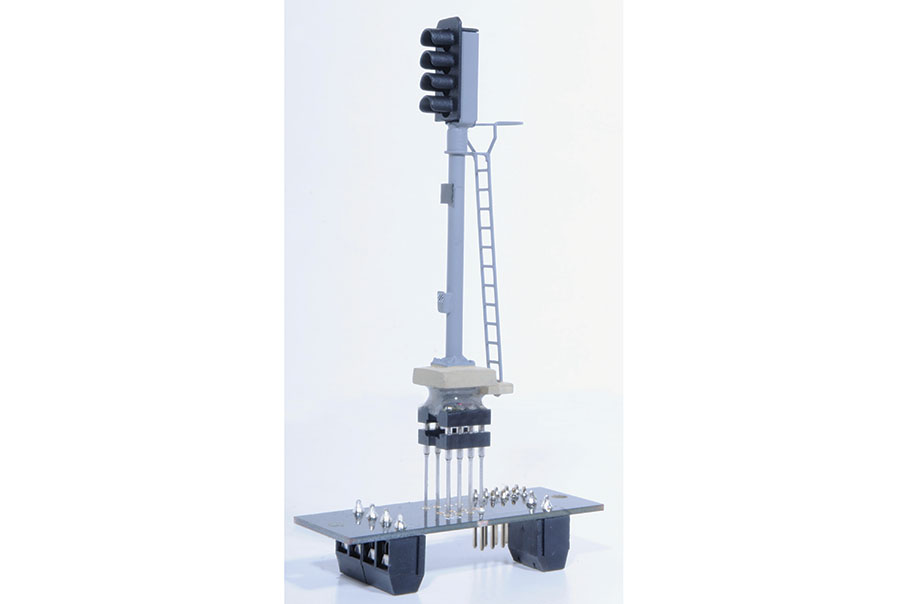 Established in 2011 with the takeover of the Roger Murray Colour Light Signals, the range has remained true to the ethos of its predecessor by producing high-quality signals that are handmade to order using brass and whitemetal components. As well as its standard products, Absolute Aspects accepts commission work for bespoke projects, such as signal gantries. The 4mm:1ft scale range includes two-, three- and four-aspect signals with a wide range of route indicator options along with ground signals, banner repeaters and SPAD indicators, with the options being much the same in 7mm:1ft scale, except for the banner repeaters.

Although on the pricey side, the quality of the a four-aspect signals are clear with a mix of metal components utilised in the construction. Each signal is fitted underneath with an integrated circuit chip connector, this mating with a similar connector on the circuit board. A rectangular hole needs to be made in the baseboard to accommodate the chip connector and the signal glued in place. The circuit board is then connected from underneath the baseboard and screwed in place. The design is principally intended for DC use with either a switch for a two-aspect signal or a rotary switch for more complex designs. However, they can be adapted to work with a suitable DCC power supply and control module.

The company offers four different types of ground signal in both 4mm:1ft and 7mm:1ft scales to the long-lived triangular design, but with alternate lighting arrangements. These encompass the traditional one red/two white style along with the modern two red/two white design. Also available are the limit of shunt variety with two constant red lights and a version with one yellow/two white lights. Again, an identification plate can be fitted and lettered at an additional cost. Each ground signal features a stem which is used to fix it into the baseboard by drilling a 4mm hole, passing the wires through and then pushing the signal into place. DC control can be carried out via a single-pole double-throw switch. A decoder must be fitted for DCC control. 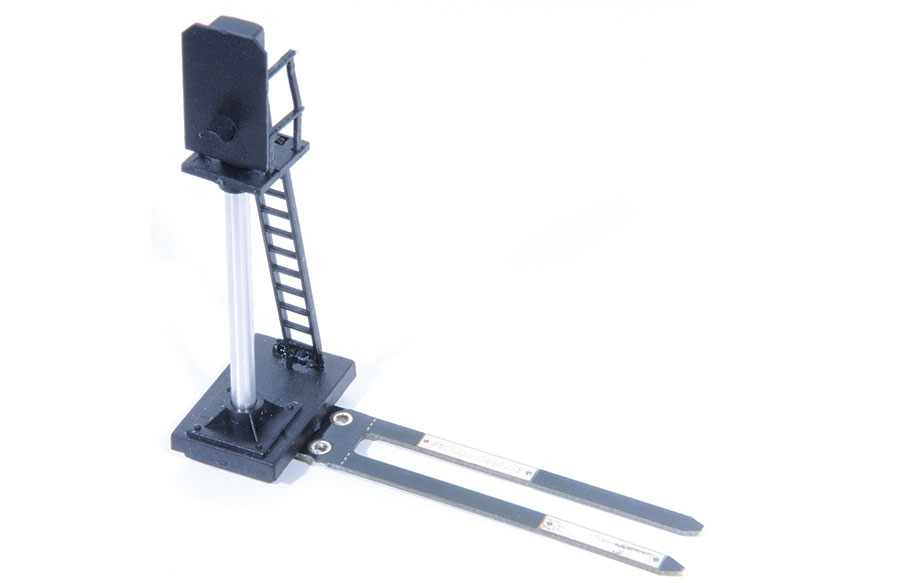 The basis of the firm’s 4mm:1ft scale signalling range is a series of kits for two-, three- and four-aspect designs, there are also options for ‘feathers’ and theatre indicators. Similarly, there are kits available for signal heads only and ground signals, all featuring LED lights. These kits can be wired to work on DC or DCC, but are also available pre-assembled offering simple installation for both DCC and automated signal users. Signal control modules are also offered in addition to an automated signal control system, ideal for block signalling where each signal communicates with its adjacent counterpart using a single wire.

In their basic form, the 4mm:1ft scale Train-Tech signals are supplied as kits with the modeller choosing which signal arrangement is required from a range of two-, three- and four-aspects with optional ‘feathers’ and theatre indicators. The required LED arrangement is supplied pre-fitted on a long narrow PCB that doubles up as the signal post with a plastic fret also included to give the signal head, ladder, railings and base. For DCC users, all of the signals are supplied largely pre-assembled but with the ladder and safety railings still needing to be attached.

Two traditional BR ground signals are offered by the company, one with red/white aspects and the other with yellow/white in both conventional DC and DCC-fitted models. The assembly on both versions is held in place by a two-piece plastic clamp with two height settings available, with wires needing to be connected to the circuit board. 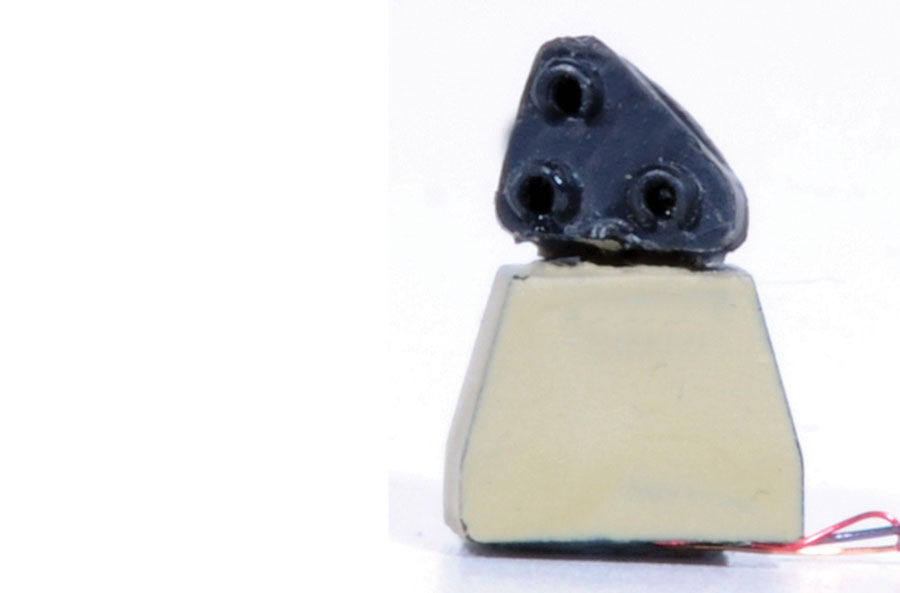 In OO gauge, a number of two-, three- and four-aspect signals are offered along with ground signals. Several route indicator ‘feather’ options are also available, which are built onto the main signal by the manufacturer when ordered, while the access ladders can be specified with either safety rings or modern safety cages. Separate pre-finished signal heads are available for use on scratch-built signal posts and gantries. The same options are available in N gauge as well, with the addition of dummy non-working signals, available in both ready-made and kit form.

CR Signals offers several versions of ground signal in both 2mm (£18.95) and 4mm (£18.00), the traditional BR version being illustrated in both cases. The N gauge design really is tiny with the head being just 3mm wide, while both have a rectangular base that ideally needs burying in ballast to give the correct look. The wiring mirrors the company’s main signals with resistors already in place and ready to connect to a switch. 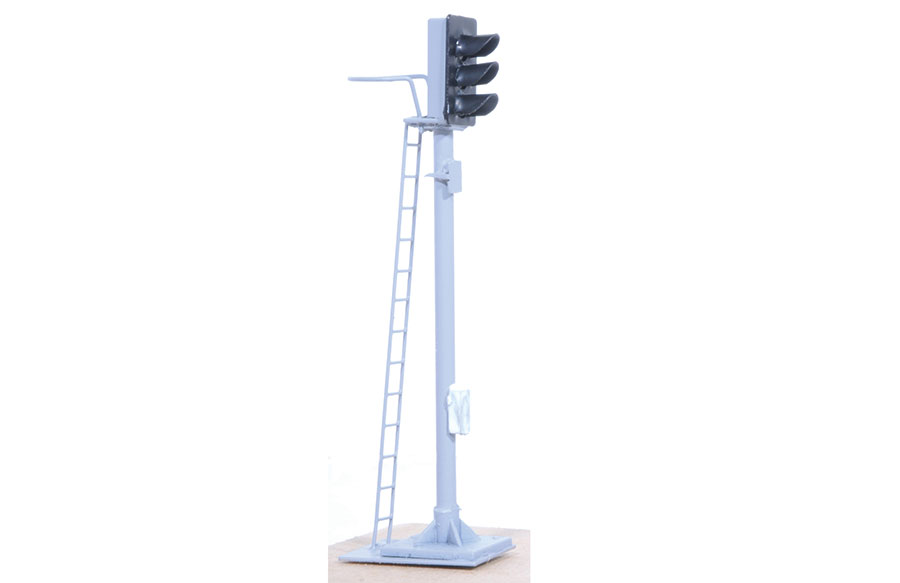 An off-shoot of an engineering company, colour light signals are produced in both 4mm:1ft and 7mm:1ft scales alongside its street and station lighting. The signals in 4mm:1ft scale encompass standard two-, three- and four-aspect designs along with block signalling packs that include a control board. In addition, pre-wired and finished signal heads are offered for modellers to fit to posts of their own construction. Much the same products are found in the 7mm:1ft scale category, but only covering two- and three-aspect signals.

Installation simply involves drilling a hole (3mm or 4mm depending on the scale) in the baseboard to thread the wires and post extension through. Again set up for DC operation, the two-aspect signals in both scales are provided with a circuit board for easy installation, this featuring a diode and resistors. For the three-aspect signal, the modeller is left to sort out the installation with both set-ups requiring a suitable switch as well. 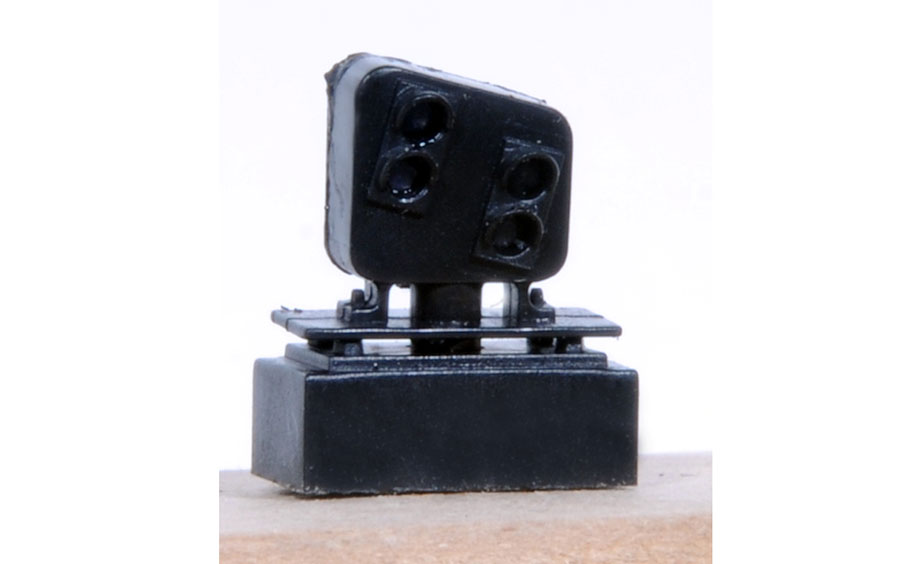 Four types of 4mm:1ft scale ground signal are offered as part of the Colbalt ‘Alpha-Mimic’ range, these being designed with DCC control primarily in mind but can be made to work on DC control too in conjunction with its Cobalt Sniffer unit.

Of the four ground signal packs offered by DCC Concepts in OO gauge, the most useful is the classic and long-lived LMS/BR triangular design with one red and two white lights, as introduced in the1930s and still found in use today. Also available is a modern four-light version along with two styles with red/green lights, one being for American layouts. The primary pack for each style features 12 ground signals along with a DCC control board to give ‘plug and play’ installation. An additional set of each type is also available, this just containing a dozen ground signals with no control board, which can either be used as an add-on pack or with another power source, such as a DC switch. If you intend to use them on DC, a suitable size resistor (7 to 10 kOhms) needs to be added to the circuit if a 12-volt DC supply is being utilised. To install on a baseboard, a 5mm hole needs to drilled in the surface to allow the plug on the wire to pass through and the base of the signal then glued in place. The plug then needs to be connected to the control board (or switch), with extension cables of varying lengths available separately if required.