How to model overgrown grass 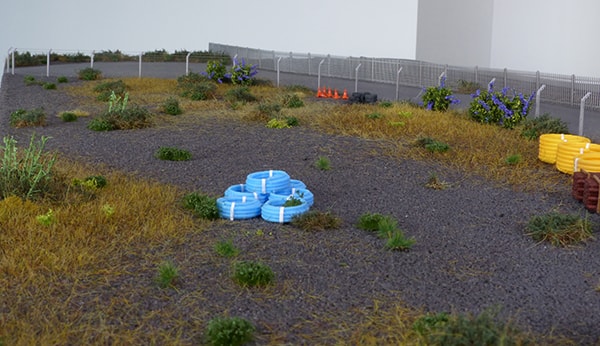 Howard Smith creates an area of neglected and abandoned land, as commonly-found adjacent to railway lines in urban locations.

A legacy of Britain's industrial revolution, brownfield sites stretch the length and breadth of the country, mostly centred around larger populated areas. Defined as a piece of unused, previously-developed land, which is potentially contaminated from its former use, brownfield sites can sometimes linger for decades, awaiting re-use. Britain's 'dark satanic mills' are no more, and many a brownfield site can be observed bordering railway property. Abandoned sidings could also be classed as brownfield sites and many are ripe candidates for hungry developers, particularly if their location is desirable, adjacent to a waterfront, for instance.

Creating the look of untamed, sparse and struggling vegetation as old tyres and weeds in full seed mingle, saw me turn to the internet for inspiration. Plenty a photograph can be found, but I chose one and stuck with it, taking note of the season, otherwise I ran the risk of outcries as green-fingered botanists exclaim that a particular weed wouldn't be seen in flower.

I've opted for autumn here, allowing Buddleia to remain in flower, with grasses of varying heights having that typical sun-parched look.

Rather than create a scene on a new diorama, I'm enhancing a corner of a stores yard on 'Runcorn Salt Union' that looked far too clean. It's also a great opportunity to test a selection of products from various scenic manufacturers.

This yard was completed hastily to finish the layout for a magazine deadline, so vegetation was quickly added from a sheet by Martin Welberg. These are great for representing brambles, but I've felt their floating appearance owing to them being quickly 'plonked' can be improved. 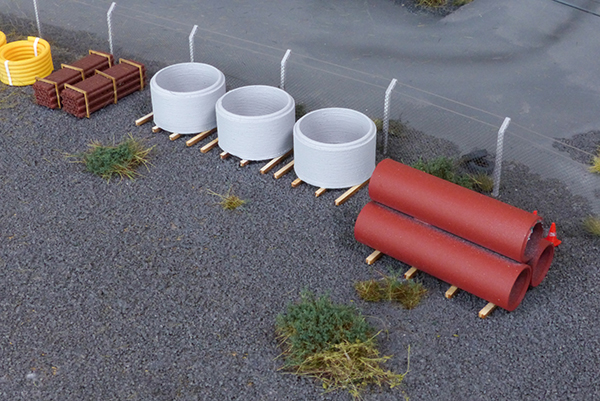 War World Scenics is a rapidly-expanding model scenery manufacturer and retailer, specialising in static grasses and its own range of static grass applicators. This, its Pro Grass Precision Applicator, is also one of the smallest on the market – ideal for small detail work, then. 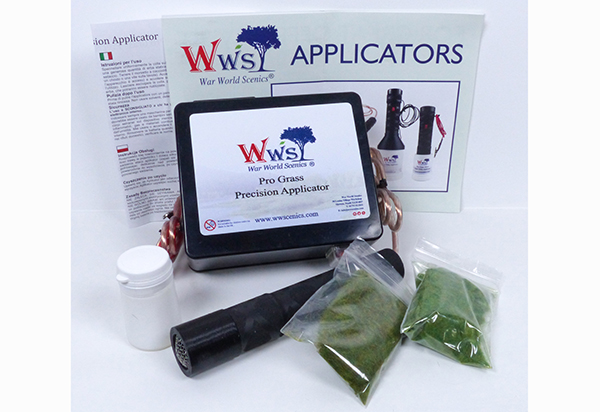 These water pipes on their own, surrounded by typical coarse gravel, will look better for being surrounded by static grass to create a rough patch of ground. For this, we'll need to use different lengths of grass fibres and colours for best effects. 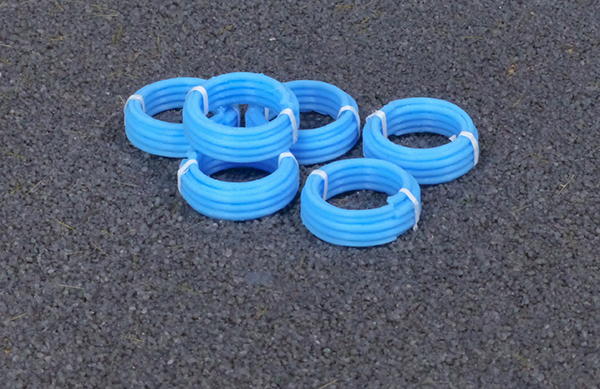 The head is removed from the Pro Grass and half-filled with Dead 2mm grass. The extra space inside ensures room for the fibres to move around and escape through the mesh. War World Scenics' grass range blends different hues to create each colour, so fibres are subtly different in colour. 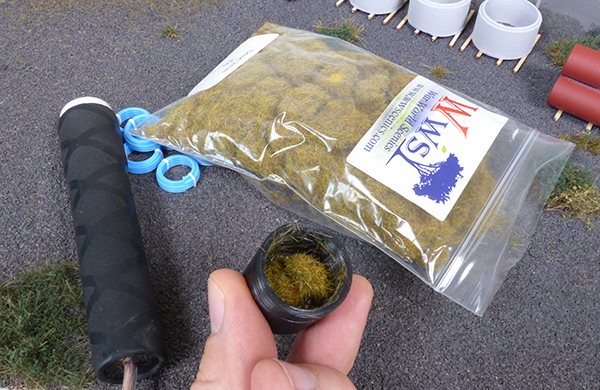 I'm using the manufacturer's Static Grass Layering Spray, too. Supplied in a 400ml can, it dries faster than standard PVA glue, ensuring that static fibres remain upright, after the static charge has been removed. It dries transparent, leaving no residue behind. 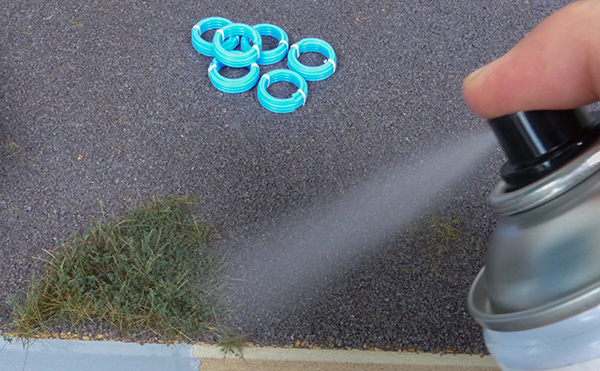 Contrary to popular belief, a nail needn't be driven into the piece of work to attach the crocodile clip – though it's easier and frees a hand for photography! Simply holding the clip to make contact with the glue is sufficient to generate an electrostatic charge, while shaking the applicator from side to side. 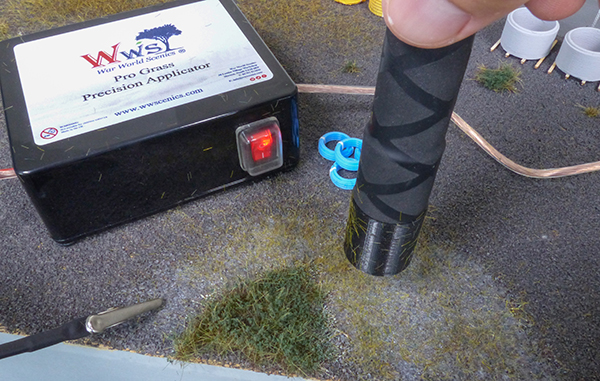 This applicator comes into its own against areas like this fence, which require careful application of fibres to prevent these from sticking where they shouldn't. It's less wasteful and there's less cleaning up, afterwards. A further layer of spray glue is applied, followed by a layer of its Patchy 4mm grass – a scale 1ft high. 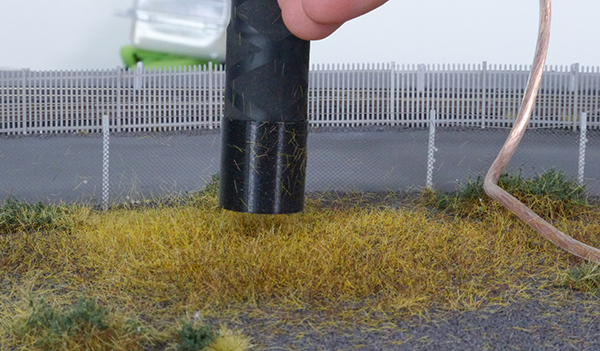 Looking from a lower level highlights the difference between areas that have received treatment in the background, versus those in the foreground, which still appear to float. Though the manufacturer produces six, eight, 10 and 12mm long fibres, I feel the grass is long enough. 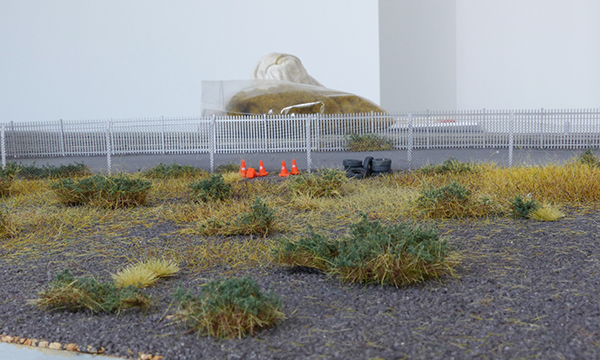 Note the transformation in this photograph, taken from a lower angle, as the viewers' eyes are satisfied by more detail. The hap-hazard and irregular application of the grass is important to avoid uniformity – it's not a formal lawn. Consider adding potential pathways by masking areas of ground with tape, if desired. 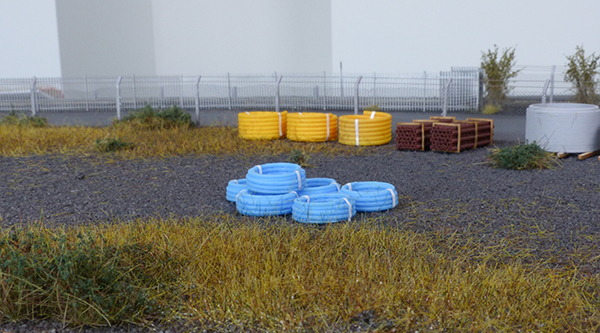 A soft bristle paintbrush is used to remove stray fibres from the fence, while stubborn fibres, glued by excess overspray, can be removed carefully using a pair of tweezers. The latter is a slow task, hence spraying the glue carefully in the first place is advised. 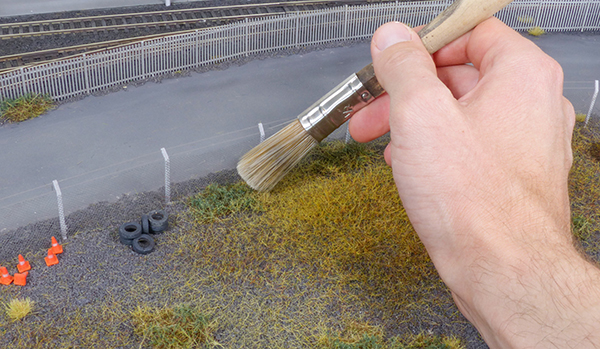 I'd recommend using a vacuum cleaner to remove stray or non-glued fibres. A cloth placed over the end can be used for recycling fibres, but you'll need to do this after each stage of application, or gathered fibres will potentially be of mixed length and colour. 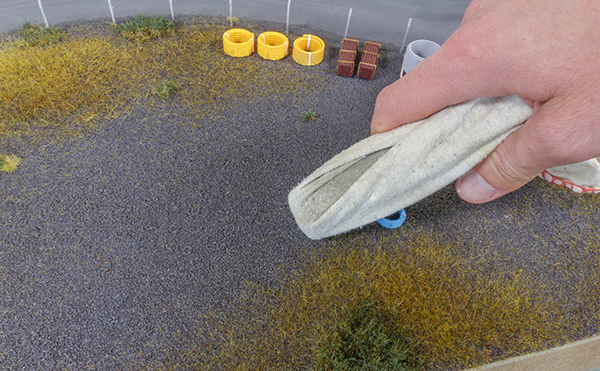 Adding variation to the grass is required unless it's to look very uniform. I'm starting with low-lying vegetation, looking to depict weeds, which, thanks to their longer tap roots, often remain a darker colour of green after the summer heat. Howard Scenic Supplies' Leafy Green Tufts create a close impression. 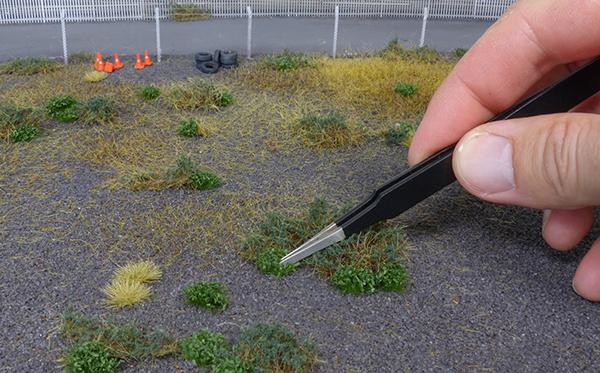 Having a self-adhesive backing means that each patch can be easily peeled and pushed into position with a pair of tweezers, hiding imperfections in the gravel, or other tufts. Making larger weeds is as simple as stacking the weeds two high, as demonstrated. 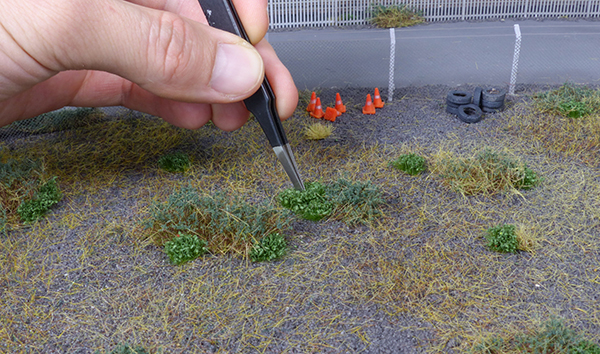 Tasma Products' (00899) nettles are a little generous in scale, made from a piece of green wire, around which is twisted a string of green paper leaves. Cutting these down a little with a pair of metal shears helps disguise their height, while leaves can be straightened to lie flat. 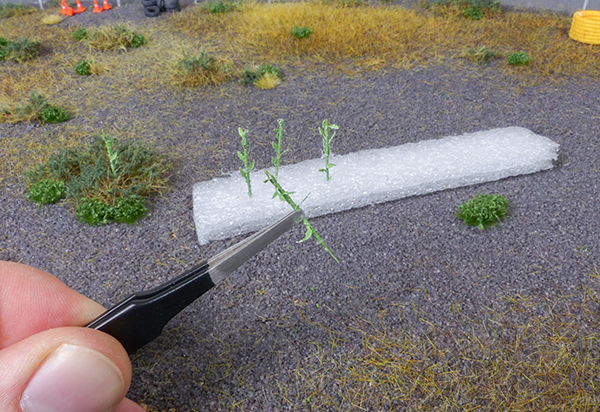 The trick is to clump the plants together to achieve an impression. From a distance, they look acceptable, though closer up, the stalks appear a little thick. Partially hiding them in this undergrowth is a solution. 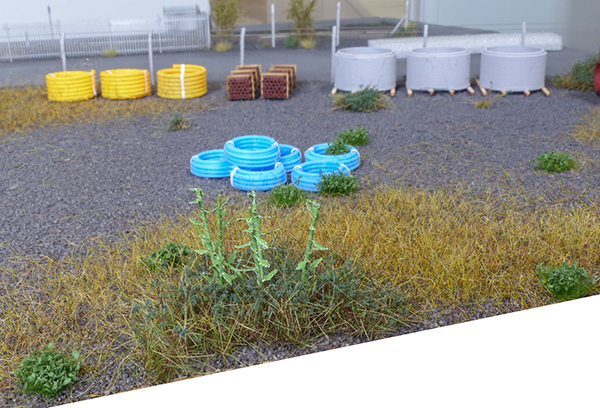 Re-purposing items designed for other uses is commonplace in railway modelling. These tufts from a vegetable patch, by Howard Scenic Supplies, make ideal weeds when pulled from their card base and affixed to the layout with a drop of superglue. 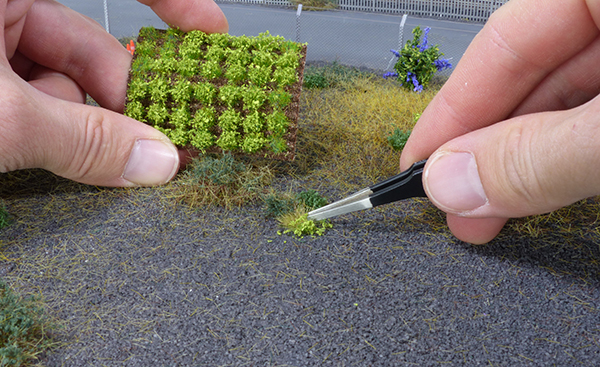 Buddleia is commonplace around derelict sites, seeding easily. It prefers well-drained soil and roots easily in cracks or ballast. These shrubs from Tasma Products are available in white or purple colours. Since the variety 'B. davidii' is commonly-found in the UK, I'm using the purple-flowered plants. 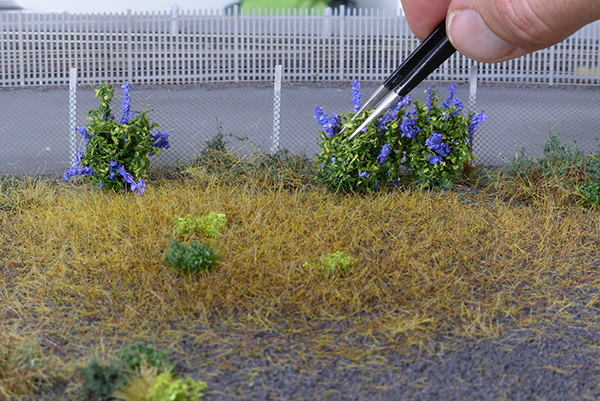 Brambles can be made from stands of static grass, to which 1mm static grass fibres are added, but I find pre-made rough grass sheets from Martin Welberg, sold by The Model Tree Shop, more realistic. Torn from the sheet, small parts are glued against the fence with superglue. 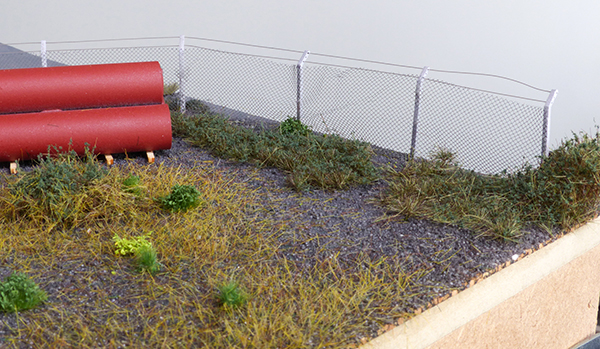 Before completing the final photograph, the model is treated to another clean with the vacuum cleaner and tweezers are used to remove stray fibres from fences. The background of Runcorn Salt Union is a little more interesting. 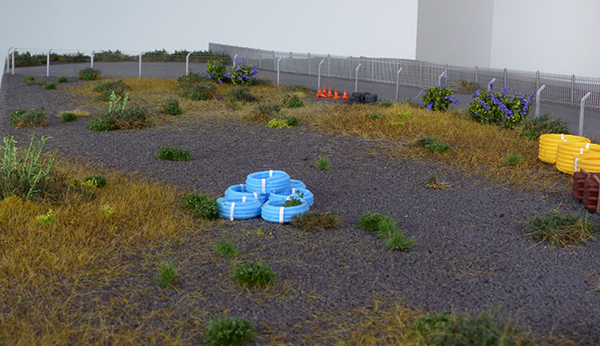