How to model wagon loads for mining areas We take a look at suitable loads for mining areas. Coal is an obvious choice, but coke, stone, ballast and ore all kept the railway in employment.

In steam days, goods trains were the lifeblood of the railway system. Miles of wagons rolled around the country hauled by locomotives such as the Q6 by Hornby.

On a model, we can do the same, but our wagons really need to be full. After all, transporting empties around represents lost money and companies didn't do this if they could help it!

Moulded plastic loads are available but these normally look exactly what they are, plastic. It's not difficult to do a much better DIY job, and often an awful lot cheaper too.

You don't have to glue anything into the wagons, so they won't be damaged. In fact, removable loads are the best idea as they allow you to run full trains to the destination, empty them, and have an excuse to run the train back in the other direction.

To start with we are looking at suitable loads for mining areas. Coal is an obvious choice, but coke, stone, ballast and ore all kept the railway in employment. Modelling each is basically the same, just use a different material.

Be aware though that coal weighs more than coke but less than stone or ore. All wagons have a maximum 'tare' (the weight they are permitted to carry) and should not be overloaded. Therefore you see a greater volume of coke than stone in a wagon, but this would still represent the same weight.

To complete the mining theme for steam era layouts, wooden pit-props were vital to the  industry and millions were shipped from wood-yard to coal pit. This is another cheap modelling project, a pounds worth of cocktail sticks will load at least two wagons. Mind you, doing this is time consuming, but ultimately satisfying.

Filling up your wagons adds a real sense of purpose to a model railway. A few evenings work can transform a model and provide a reason that the trains are running, yet you only need knife to cut some cardboard and a bit of glue and coal.

A simple to use kit from Geoscenics containing some high quality corrugated cardboard and a bag of load material, in this case coal. 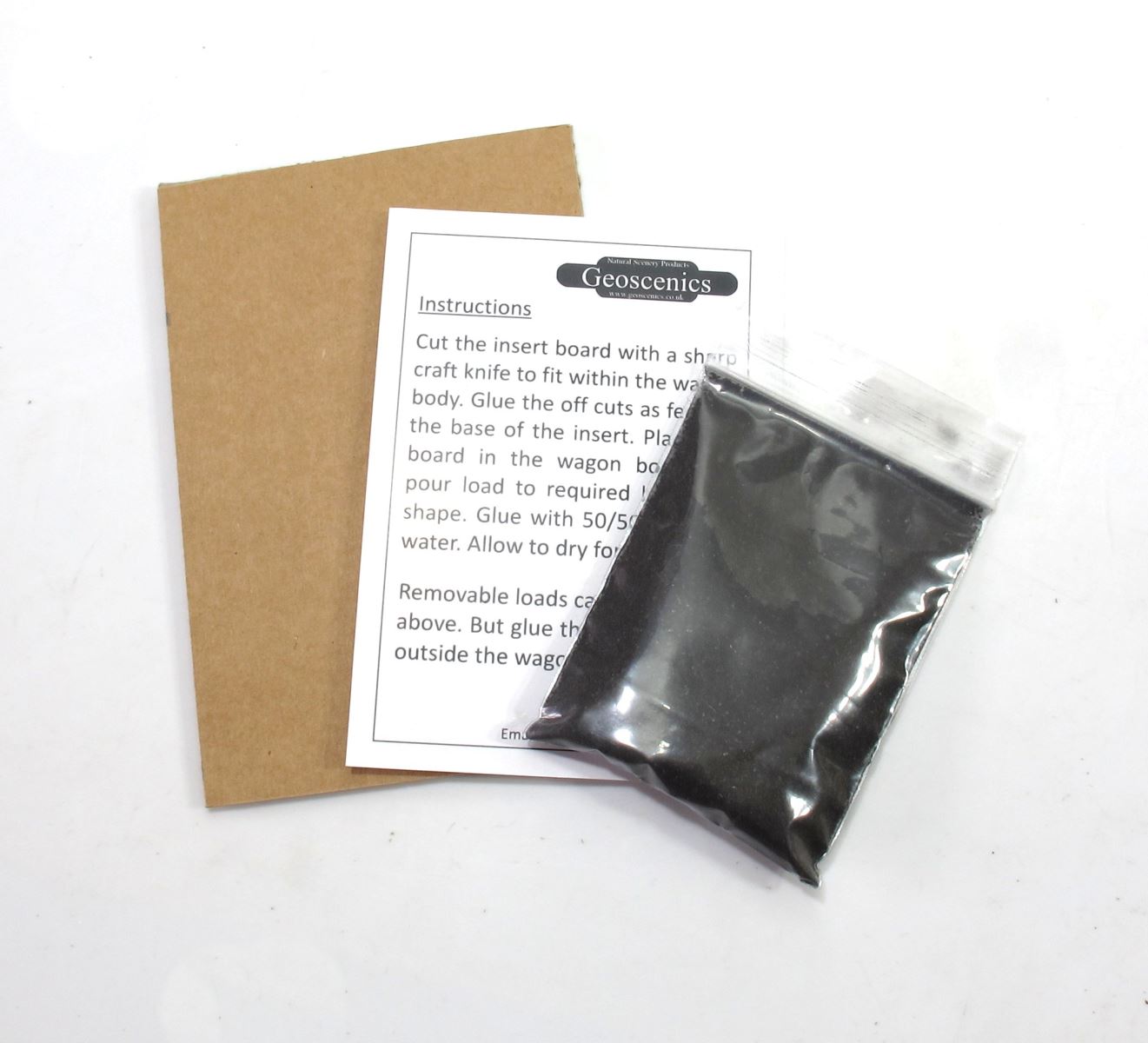 Work starts by cutting a piece of card so it just fits into the wagon. This needs to be a good fit, but not tight. 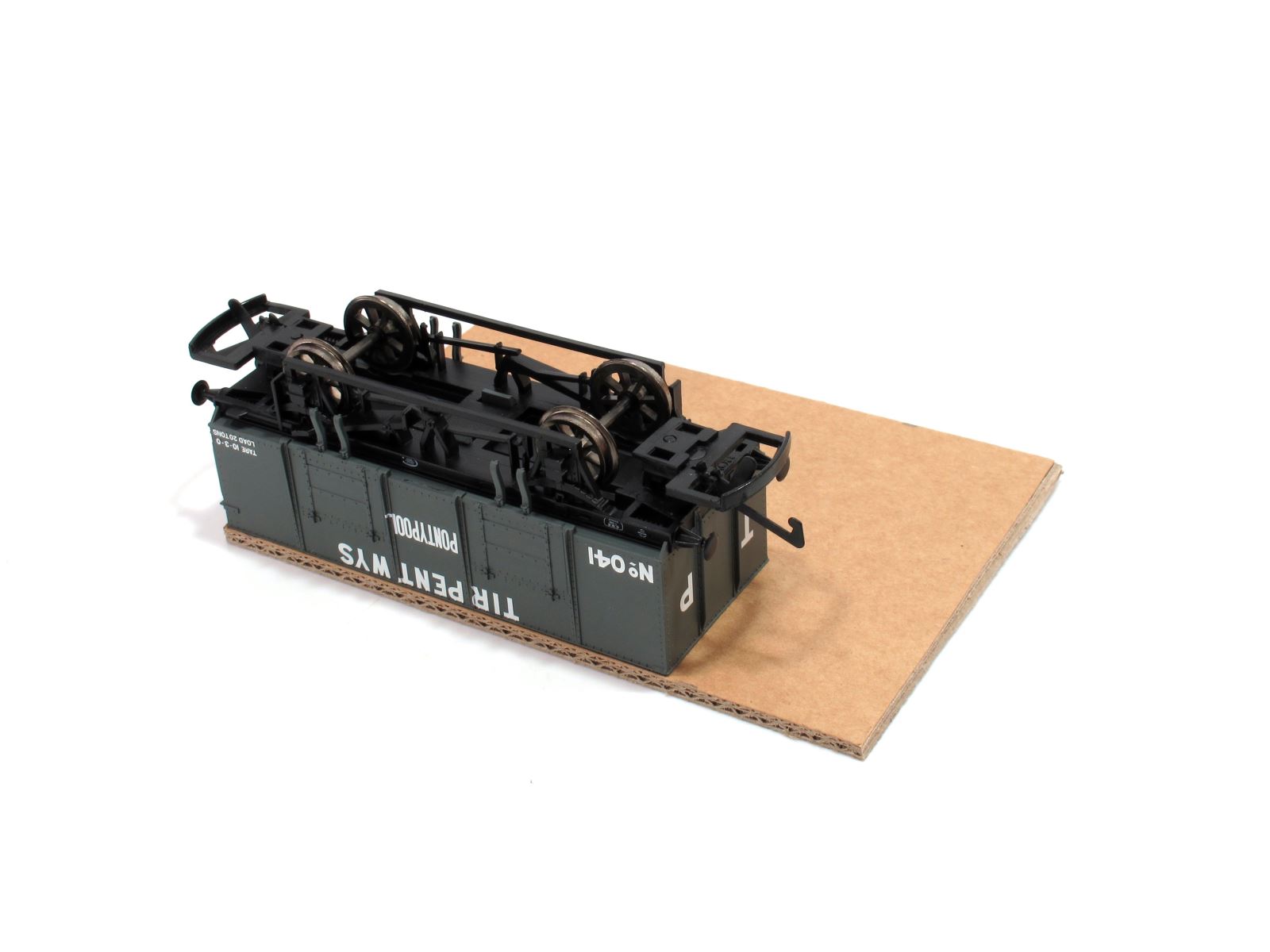 More card is used to make up supports. For a coal load, the top should be around 2-3mm below the top edge of the wagon. 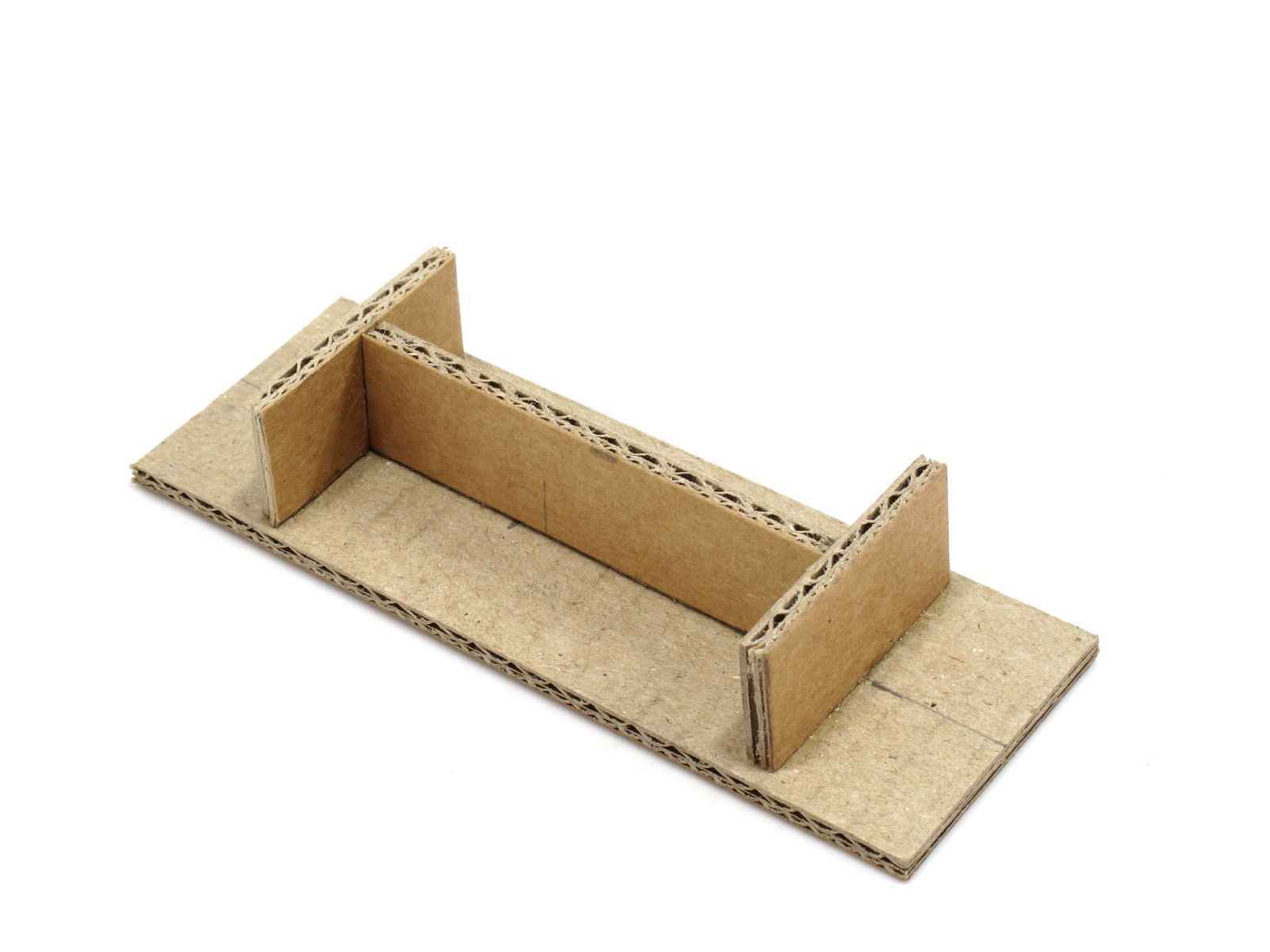 Once built, the load should be easy to remove by pushing one end. If it's too tight at this stage, trim some more card away. 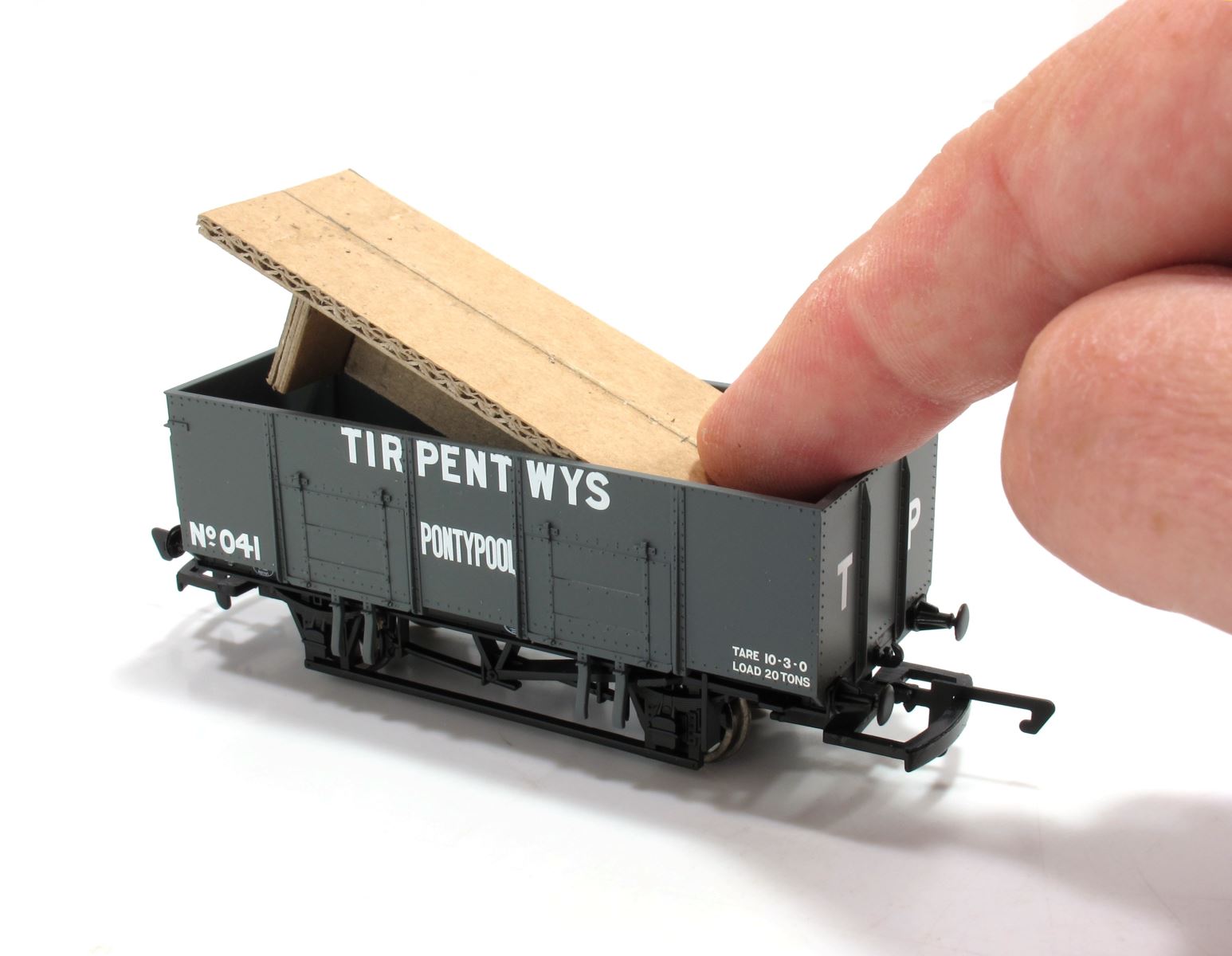 A quick coat of black paint is followed by a sprinkle of load material held in place with diluted PVA glue (50/50 water/PVA). Note the little mounds showing where coal is poured into the wagon from above. 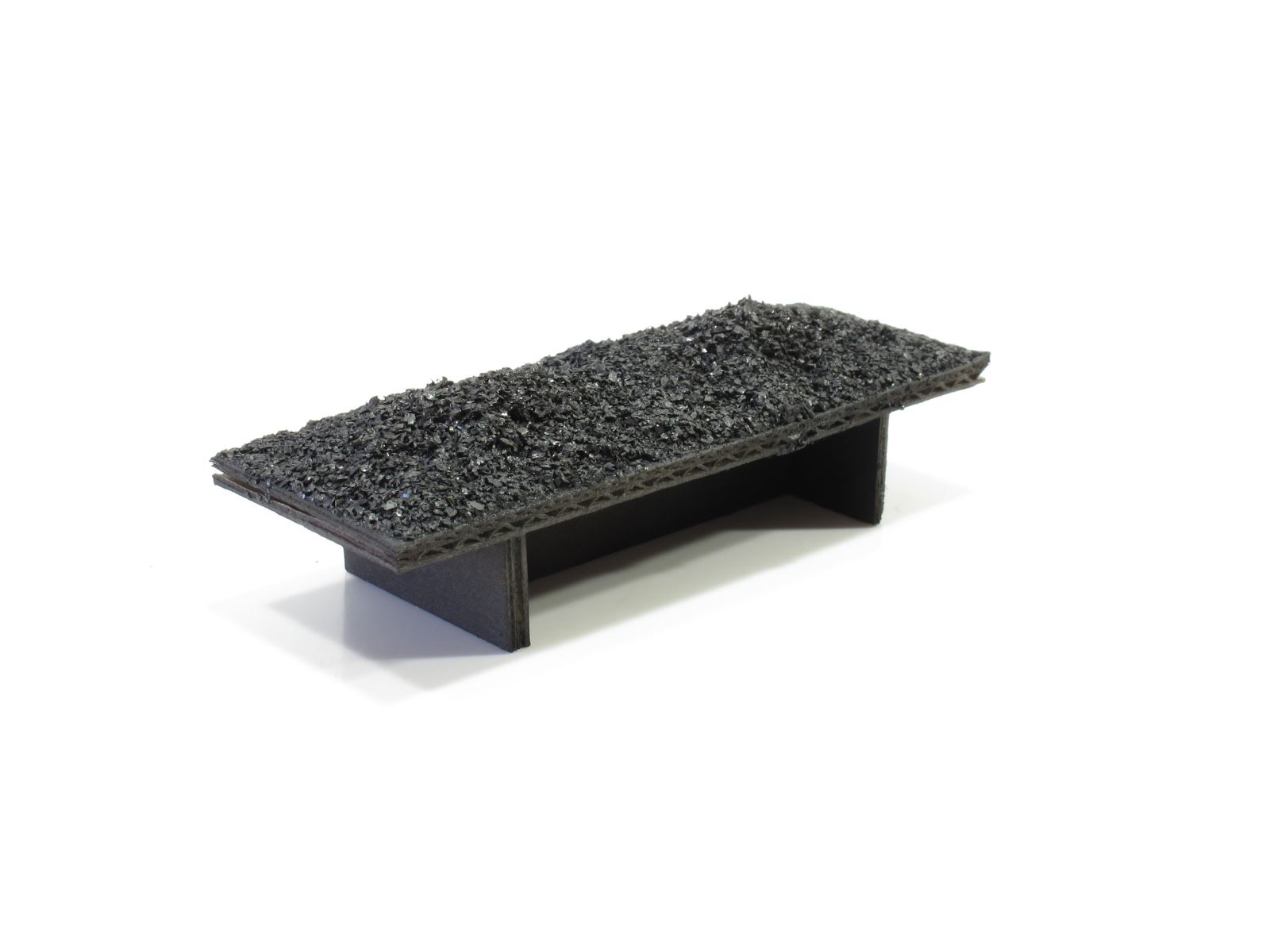 Using some old cereal packet, we've made a similar load for limestone ballast. This is heavier than coal so wagons weren't loaded so full, about 5-7 mm from the top is perfect. 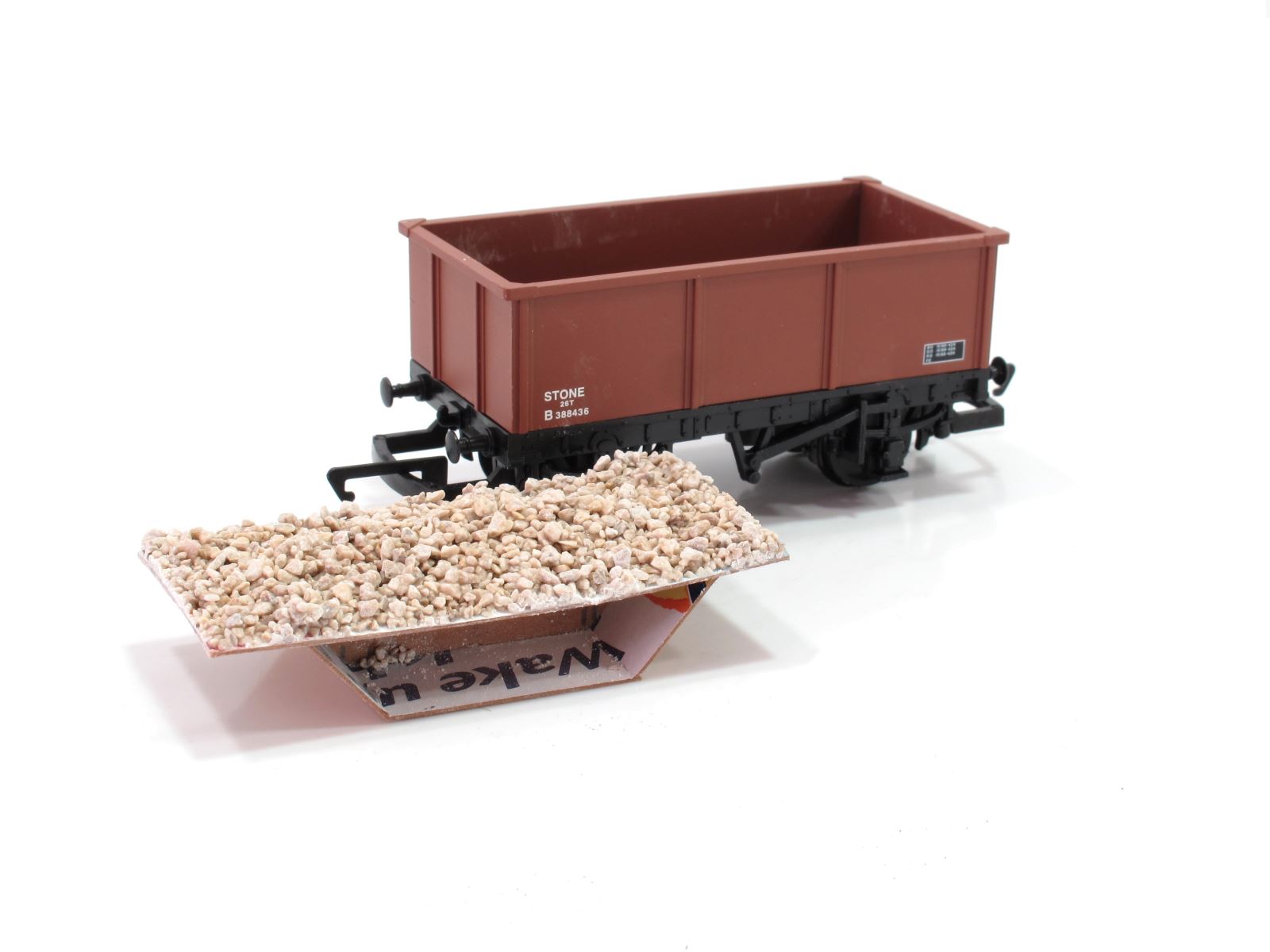 If you have some foam or dense sponge to hand, try cutting it to fit the wagon and then trimming the top into a mound shape with a pair of curved nail scissors. As the foam is springy, it can be slightly bigger then the inside of the wagon. 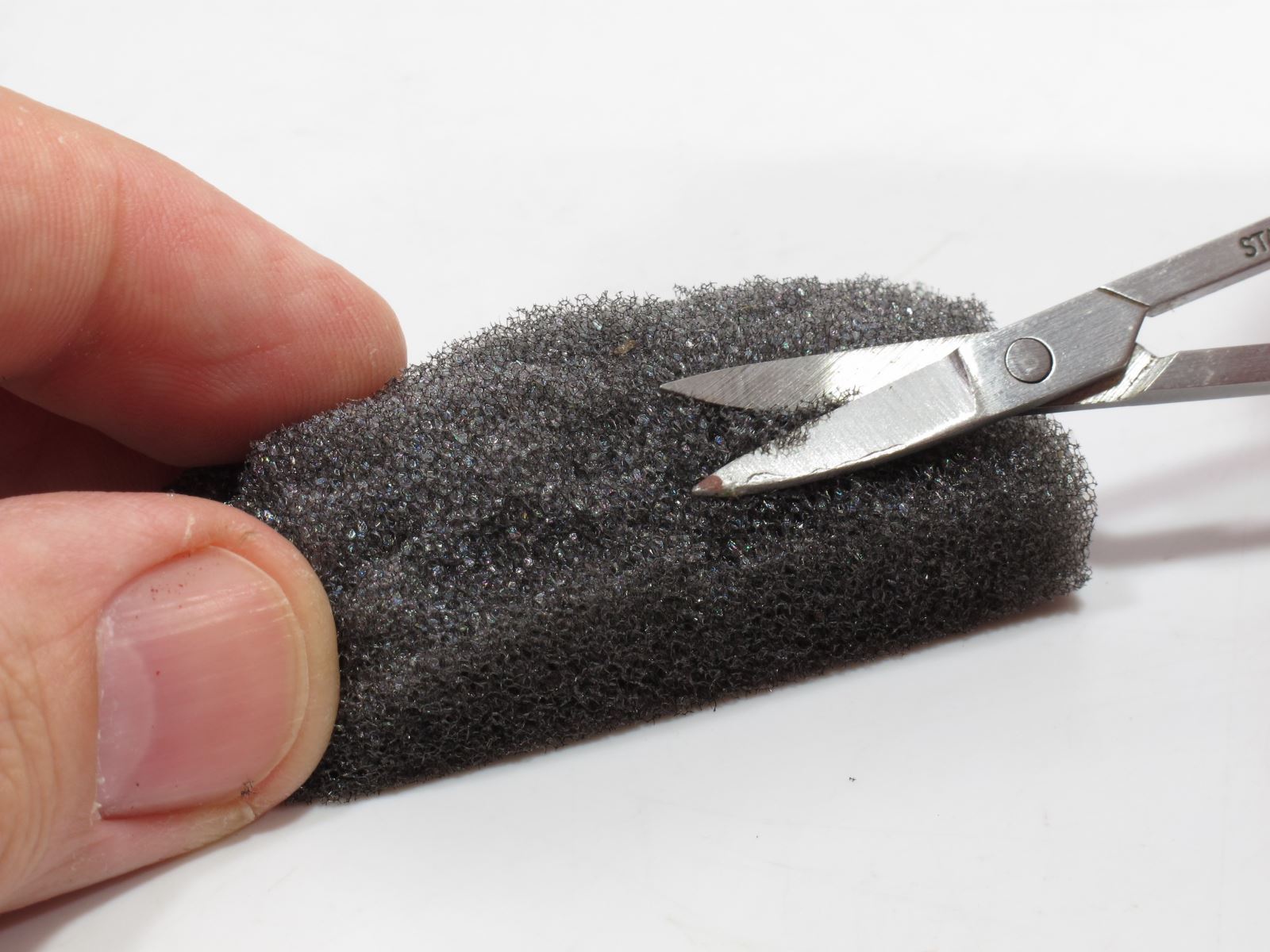 We’re using real coal here and crushing it with pliers. You can use a hammer but it's very messy. Coal sold for model engineers is best as it's nice and soft – try on-line auctions or exhibitions. We bought a lifetime supply for under ten pounds! 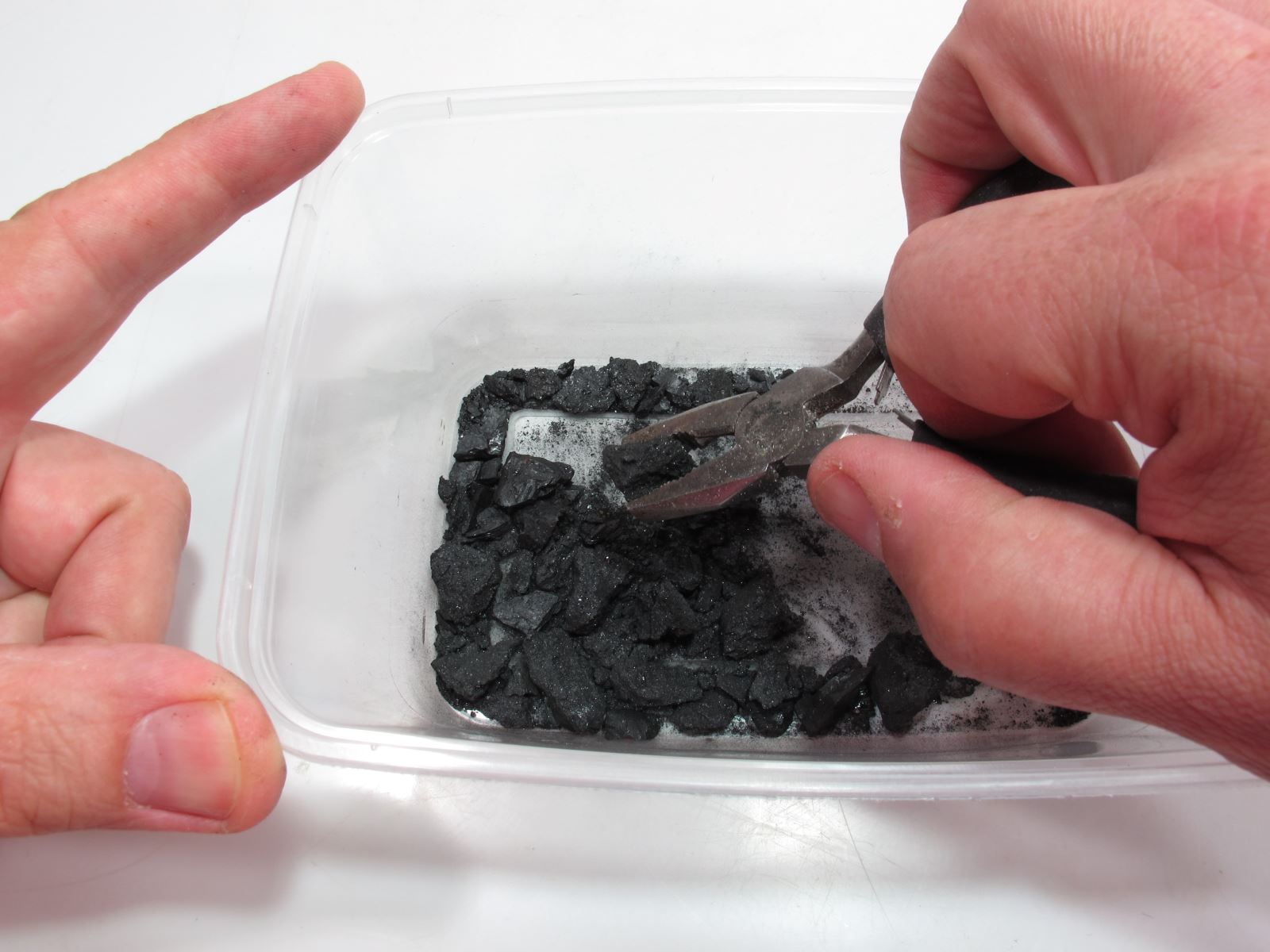 Coke is very light so the loads are much higher than those for coal. Wagons were often fitted with extension boards to allow the full capacity to be used. 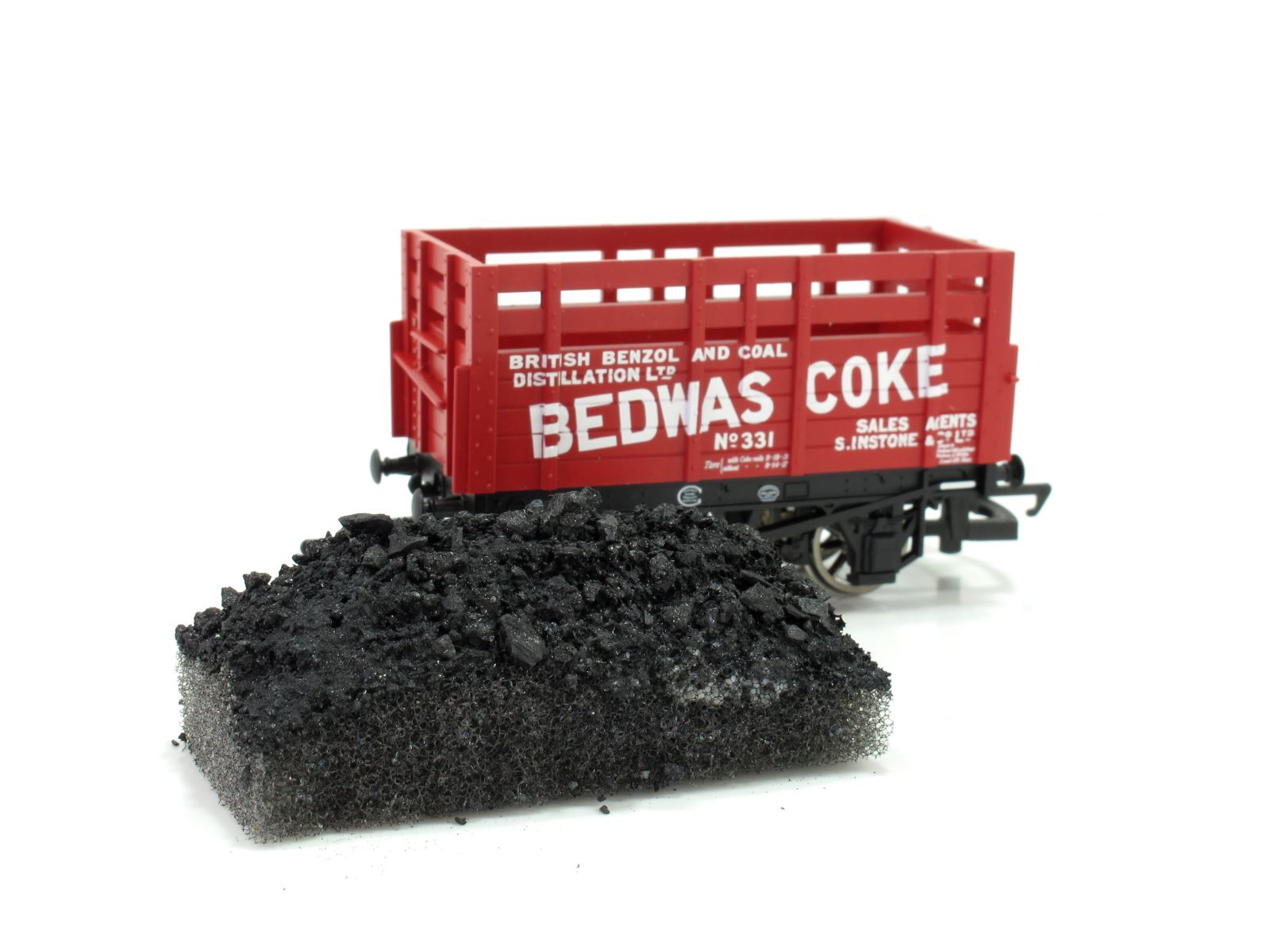 Removing the load is easy if you take a length of wire (a straightened paper-clip will work) and bend a hook at the end of it. This is poked into the foam and the load pulled out. 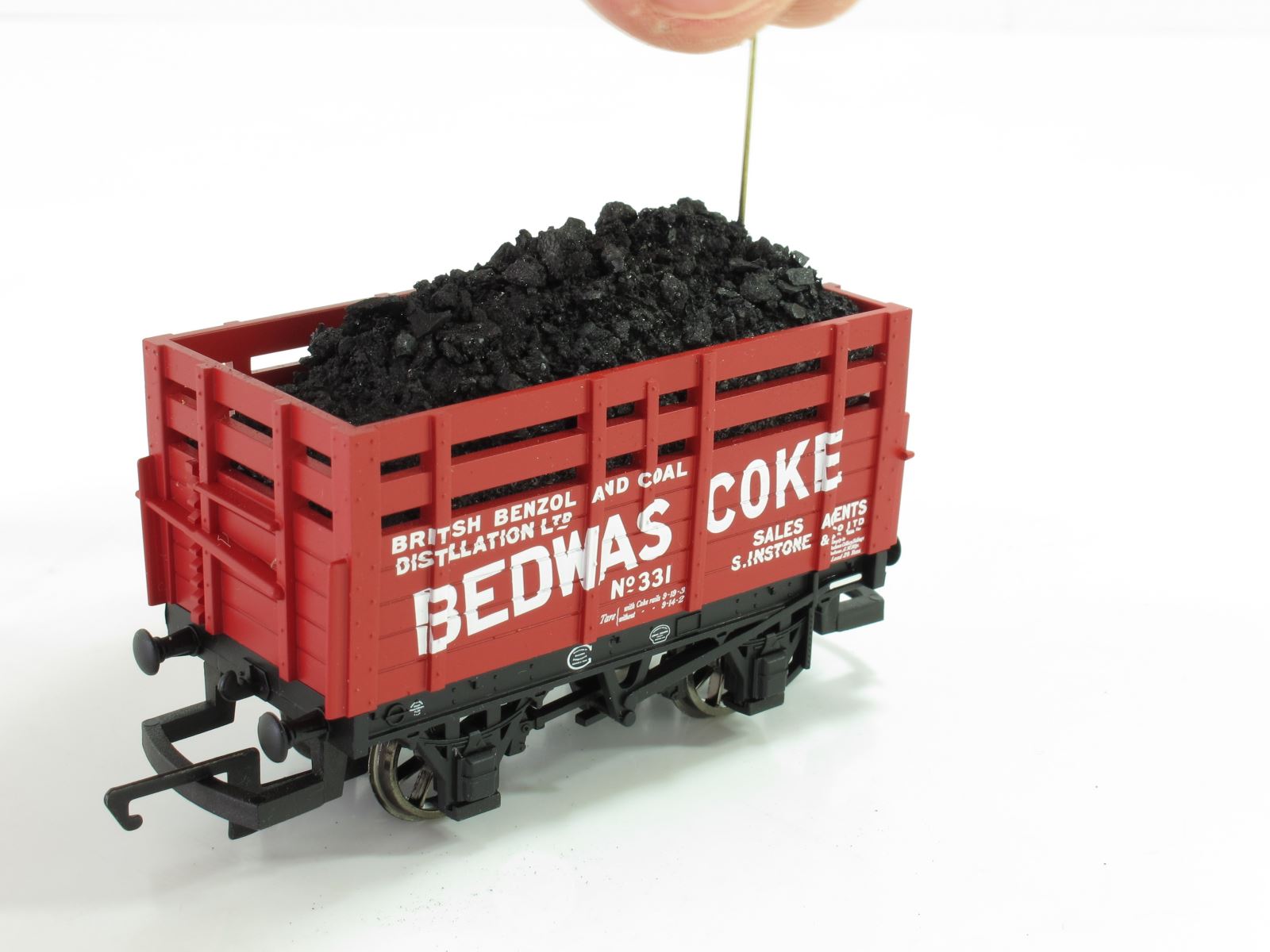 Very specific instructions were laid down for transporting pit-props. We cut ours from cocktail sticks, each 28mm long, and fixed onto a cereal packet floor with PVA. Time-consuming but looks great once painted dark brown. 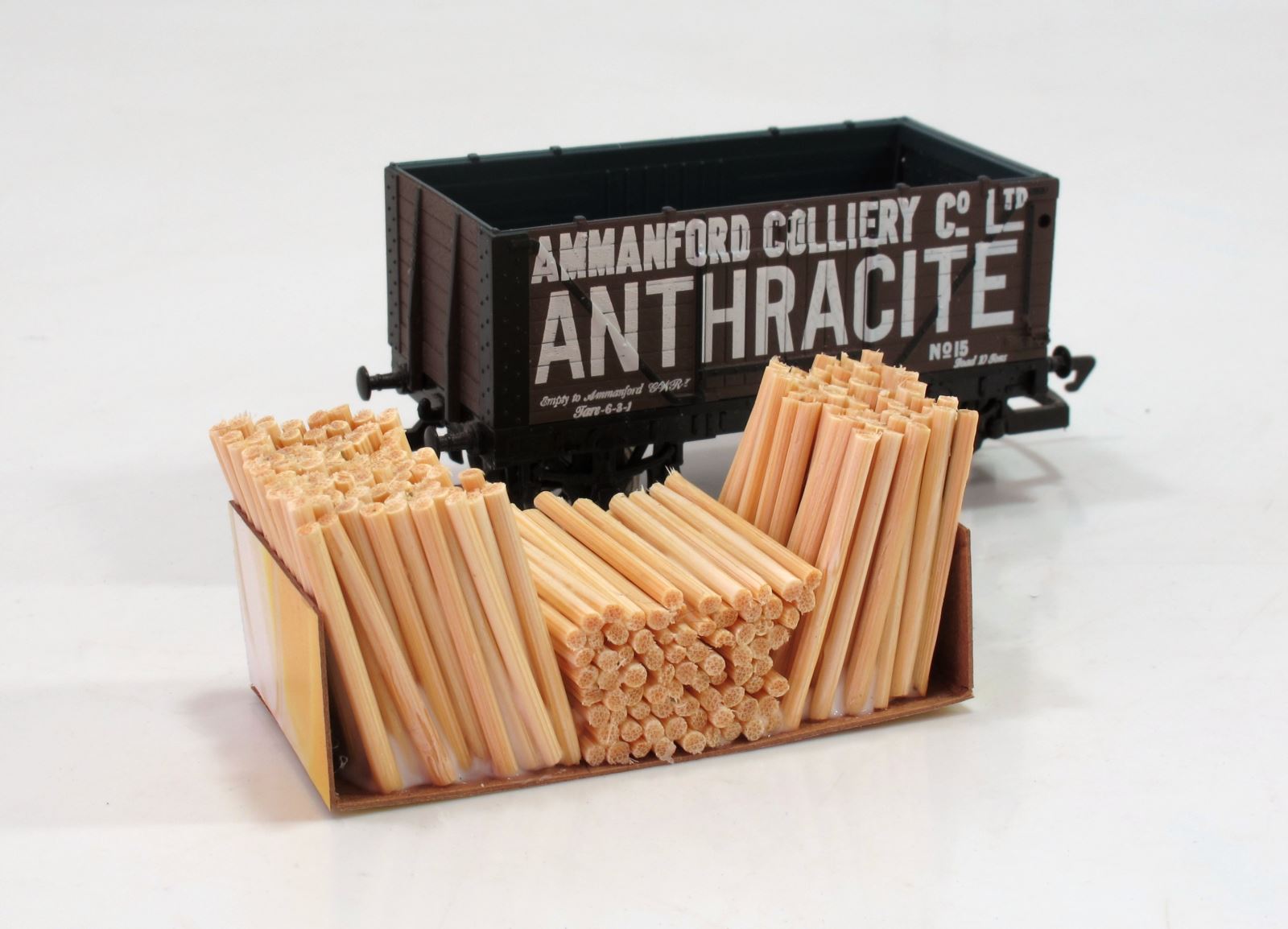 You'll see from this simple 11-step guide just how easy it is to create a variety of wagon loads, all of which are suitable for mining areas. We love how these loads are easily removed and transferrable to other wagons. Plus, ther are really cheap to model. Try them for yourself! You can see from this picture just how effective they are. 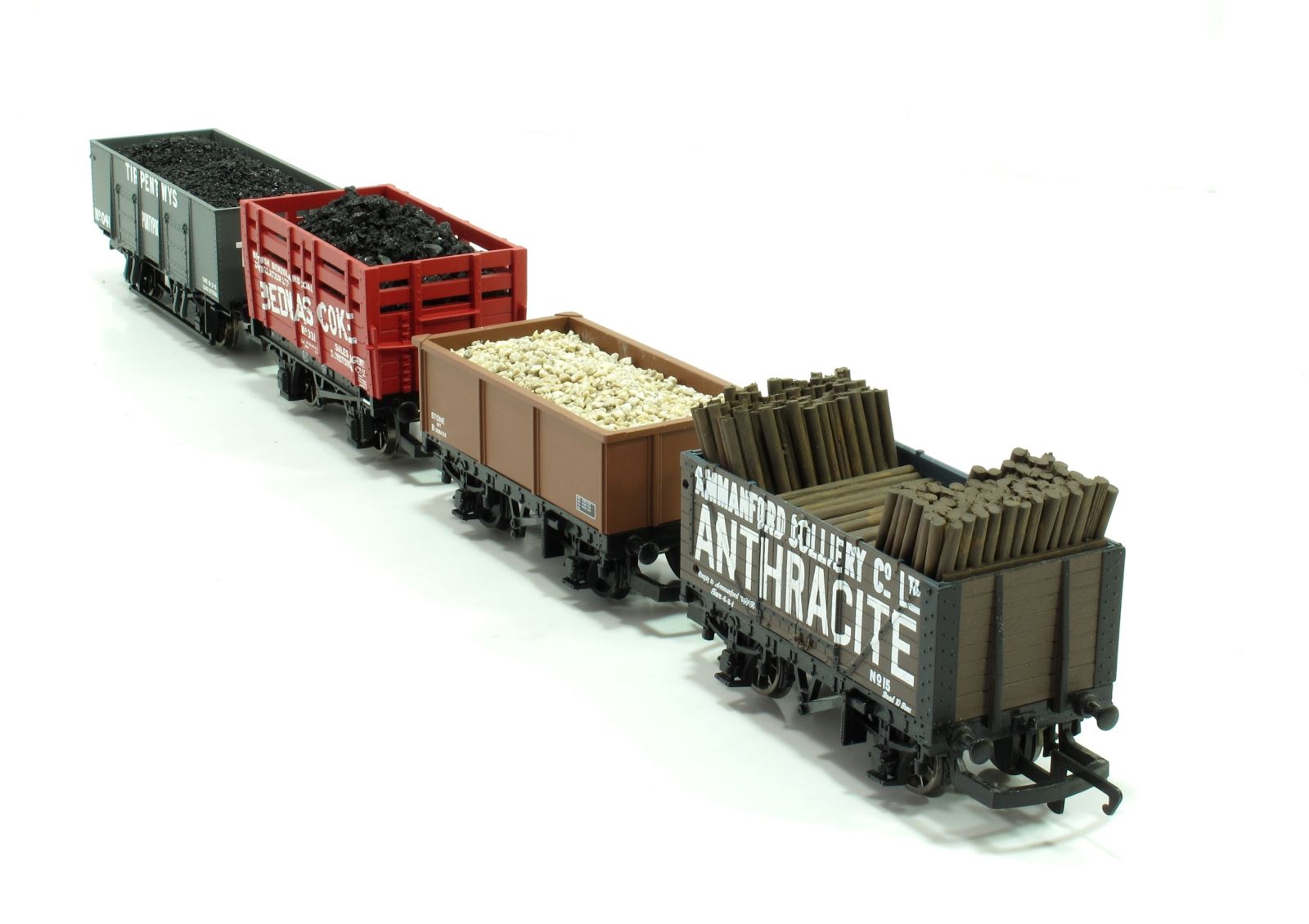 Click here to read our guide to modelling even more loads for your model railway wagons.