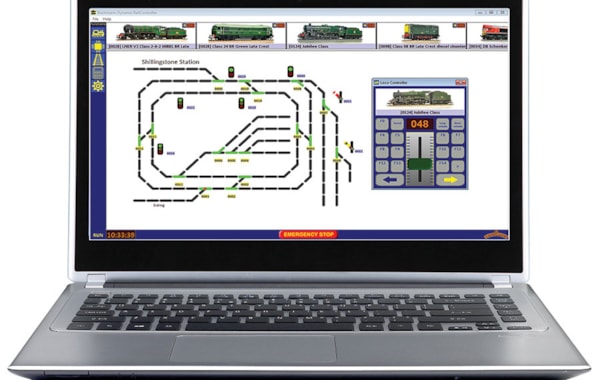 Digital Command Control has evolved greatly over the past two decades. From its inception in the late twentieth century, locomotives could be moved and turnouts and signalling operated through individual identification numbers through two wires from the controller to the layout. Since then, the NMRA (National Model Railroad Association) in the United States - creators of the original DCC specification, which the likes of Bachmann and Hornby in the UK have adopted - has enhanced the standard specification to accommodate new functionality. DCC has been developed to such a degree that the operation of model railways has, ironically, become more complicated than ever. From lights to sound and smoke effects on demand at the push of a button, remembering which button to press – and when – can prove challenging.

DCC uses digital binary signals sent over two wires on a DC voltage that alternate rapidly between negative and positive to encode speed, direction and function data to individual locomotives on the track. Each locomotive contains a decoder chip programmed to a specific ID, which recognises signals for that locomotive. This permits the operation of thousands of locomotives without the need to isolate track sections like analogue DC control. 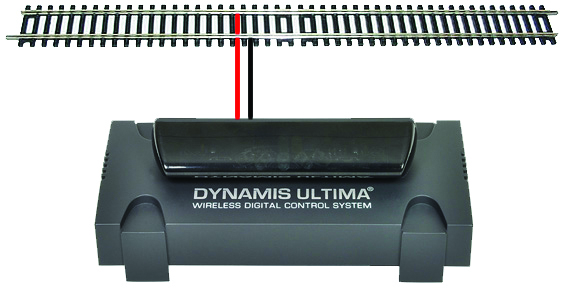 With the proliferation and affordability of personal computers, several suppliers have developed software products, which link to a variety of DCC controllers. Hornby developed its RailMaster product and Bachmann Europe did the same with its RailController software. Other software packages are available to suit a variety of budgets and promise a great deal, although they require a learning curve to get the most out of them. 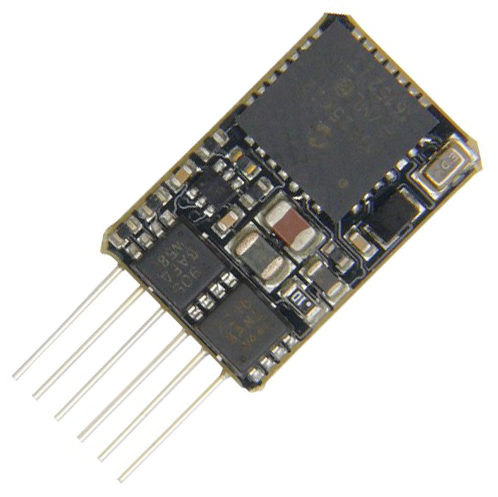 Before DCC, the only way to operate a model railway was to apply a voltage to an area of the layout, or the entire layout - usually 12VDC. When you turn the controller knob, every single locomotive on the track to which the controller is connected moves at the same time. To allow more control of certain areas of track on a DC layout, without moving multiple locomotives at the same time, isolating sections must be used. These are areas of the layout where the power to the track is turned off using a switch. The more complex the layout, the more isolating sections are required, hence, more switches. This makes operation quite complicated and unlike real-world operations, usually requiring several operators. Once the isolation sections are in place, changing these at a later date with scenery in place can prove difficult.

Today, most people entering the hobby opt for Digital Command Control because of the flexibility offered by digital control.

The one major advantage of using DCC over DC is that you can connect just two wires to your layout, insert a decoder into each locomotive and address them with a unique ID number to control them. Apart from the increased cost of the DCC control unit and having to put a decoder into each locomotive, one drawback is the number of buttons you need to press to control any locomotive, turnout or signal on your layout.

With the proliferation of sound locomotives with many functions and modellers wanting motorised points and multi-aspect signals, control of these is becoming more complicated. 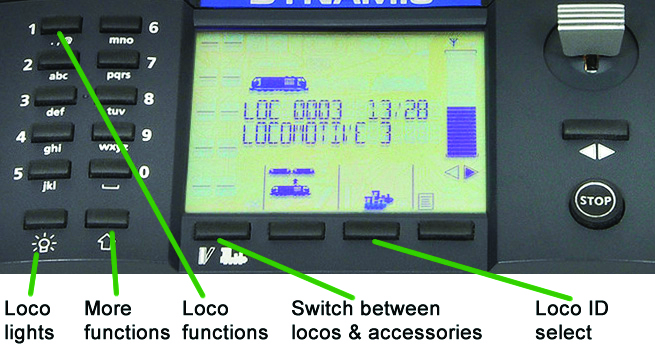 On most DCC controllers, there are only a certain number of buttons which can be incorporated because of space limitations. Locomotives and other devices must be addressed by typing in their ID. An example, using the Bachmann Dynamis controller to control a locomotive is: press the locomotive/accessory button to control a locomotive. Press the Loco ID select button. Enter the ID, then use the throttle control or function buttons. It can be long-winded, and this is where computer software becomes useful. On a program like RailController, just select the locomotive to control from the ribbon. This ribbon can be dragged left or right to reveal more locomotives.

A locomotive controller will appear and all you have to do is slide the throttle or press a function button. The functions on a decoder are traditionally listed in numerical order. These are known ‘F’ numbers (F1, F2 and so on) but the function buttons on the software contain the descriptions of the functions to help the user. Remembering which one to activate is simple and error-free. 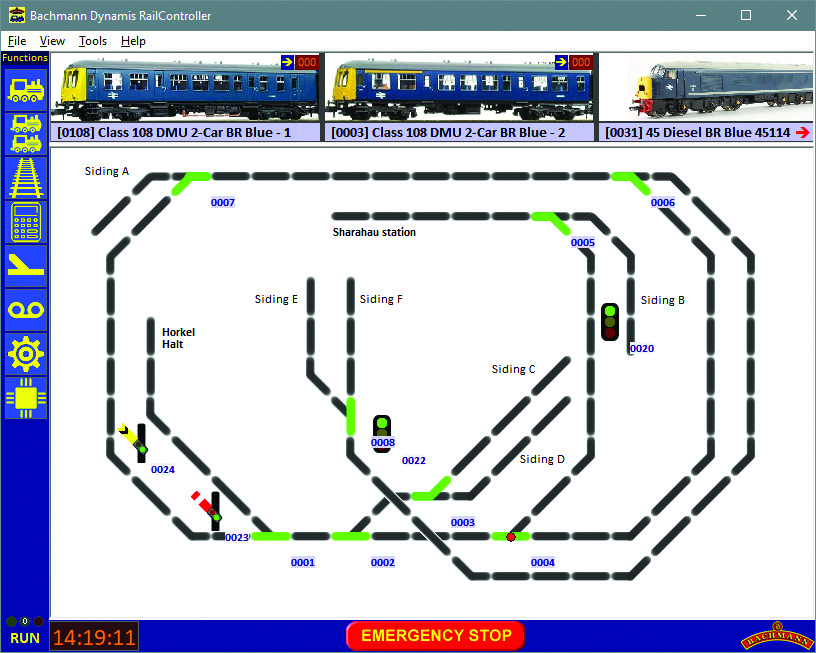 Operating turnouts and signals is simple - a single click on a turnout or signal on the track plan switches it. In the case of multi-aspect colour light signals, these will go through their lighting sequences. You can even set the program up to switch a series of turnouts and signals at the same time, known as relaying. This is ideal for larger layouts where a route might require multiple turnouts being changed at the same time.

The main feature of most software-based control systems is their ease of use. Operating a layout with even just a handful of trains, turnouts and signals can be challenging using a stand-alone DCC controller. Locomotives and accessories must first be addressed by their DCC ID, which often requires referring to a crib-sheet or memorising lots of numbers. When you add locomotive sound and light functions into the equation, this makes it even harder as you cannot see the descriptions of each button. 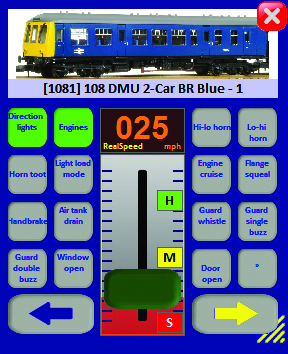 After you create a track plan in RailController, operating turnouts and signals is as simple as just clicking on them. This can be done using a mouse or touch screen. Touch screen monitors are becoming more affordable and a ten or 13in USB-powered monitor can be sited easily around a layout, making it accessible, yet unobtrusive. Using an interactive track plan like that built into RailController is similar to the way signalmen have operated points and signals on the real railways for decades. You needn’t worry about designing or making a traditional layout control panel, either – the screen becomes your control panel.

RailController is designed to simplify the control of locomotives. All you have to do is to click on any locomotive on the ribbon (the group of locomotive images across the top of the main screen, which can be dragged from side to side) and a locomotive controller appears ‘on screen’. The controller displays a sliding throttle (known as RealSpeed), an approximation of the scale speed at which the locomotive is travelling (mph or kph), as well as its direction and function options.

Latching functions (functions which are permanently on until they are turned off) are highlighted in green to indicate they are activated. You don’t have to remember what a particular function does because each is printed on each button. 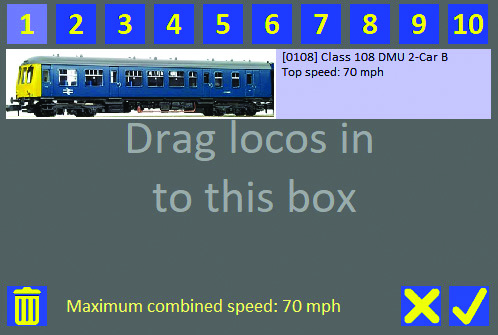 As with locomotive control, setting up and dissolving ‘double-heading’ – the operation of two locomotives coupled together, each with a decoder – is straightforward in RailController. RailController allows you to set up to ten multiple headers by dragging the desired locomotives from the ribbon into the centre of the RailController Window. Clicking on the number button, one to ten, assigns any one of ten sets of headers. Another thing to note is that when you add a number of locomotives to a header, RailController will limit the maximum header speed to that of the slowest locomotive.

Packages like RailController make model railway control easier and add useful functions that are difficult to offer in a stand-alone controller because of power and size constraints. 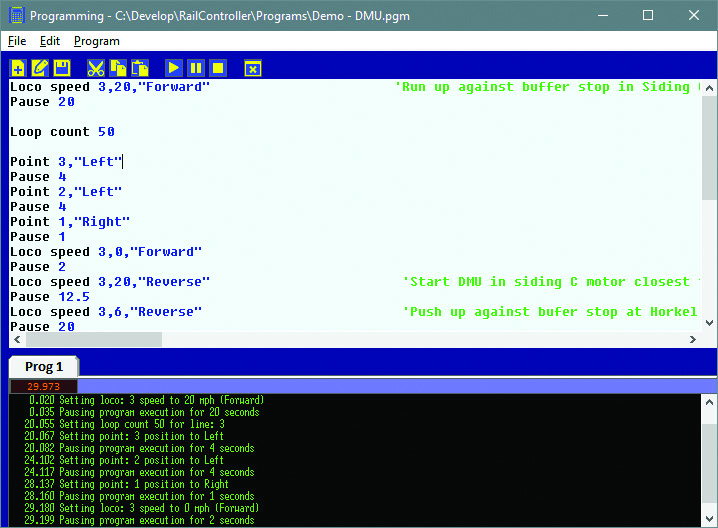 A powerful feature of some model railway control software packages, such as RailController is the ability to record a range of operations, including running locomotives, setting light and sound functions and operating accessories such as turnouts and signals in real-time.  As you operate your layout, RailController will record everything you do. You can then stop recording and RailController will build a program automatically, based on the operations. You can then fine-tune the program or add and remove commands to make your layout do exactly what you want. This can be limited to automating a section of your layout, or the whole thing.

Bachmann believes that computer control of model railways, in one form or another, is the future and it is a positive step that manufacturers are bringing easy-to-use packages to modellers and removing the mystique that surrounds them.

If you're new to model railways and struggling to get your head around the technical terms? Our guide here takes a closer look at the key differences between analogue and digital control.

If you want to explore DCC further, head to our dedicated section.