We tackle all things DCC in our online article, where we aim to dispel some of the myths surrounding DCC.

There's a lot of 'buzz words' associated with DCC. Trying to figure out if this method of model railway control is right for you, can be equally confusing.

What is DCC? Why do you need DCC? How difficult is DCC wiring? We'll answer these questions to dispel some of the myths surrounding DCC.

What does DCC mean?

The conventional method of operating model railways is known as analogue technology using a DC (direct current) transformer/controller. In the simplest of terms, using an analogue system means just one locomotive can be operated by one DC controller (and its transformer) on one section of track at any one time.

If a DC layout has tracks that are electrically isolated from each another it will be possible to move more than one train at the same time on different tracks, but it will be necessary to use one controller to operate one different train on each section of the isolated tracks.

Today, most people entering the hobby opt for Digital Command Control (DCC) because of the control flexibility and opportunities for sounds that it offers. The major advantage of using DCC over DC is that (in theory) you can connect just two wires to your layout, insert a decoder into each locomotive and address them with a unique ID number to control them.

With DCC an entire layout is fed with electrical power at the same time. To control the individual locomotives the DCC controller (often known as the cab or throttle) sends instructions to each locomotive via the rails. Each locomotive is ﬁtted with a decoder that receives commands from the controller and converts the signal (or decodes it) into instructions that relate to its movement, the lights (if ﬁtted) and other functions such as sound effects (if ﬁtted). This means that each DCC (decoder ﬁtted) locomotive can be controlled individually without the need for different track sections and many of the wiring complications that might occur if DC control was used.

Each DCC-equipped locomotive is given an identifying address that is a number. So, for example, a Class 31 locomotive might carry the address 031, a Class 150 DMU might be 150 and a Class 57 diesel might be 057. When a locomotive is bought it usually carries the default address 003.

The factory-installed settings in the decoder determine how that decoder controls the locomotive. The purchaser can tailor locomotives on an advanced DCC system to conﬁgure the acceleration, braking, lighting and sound effects using CVs (conﬁguration variables). 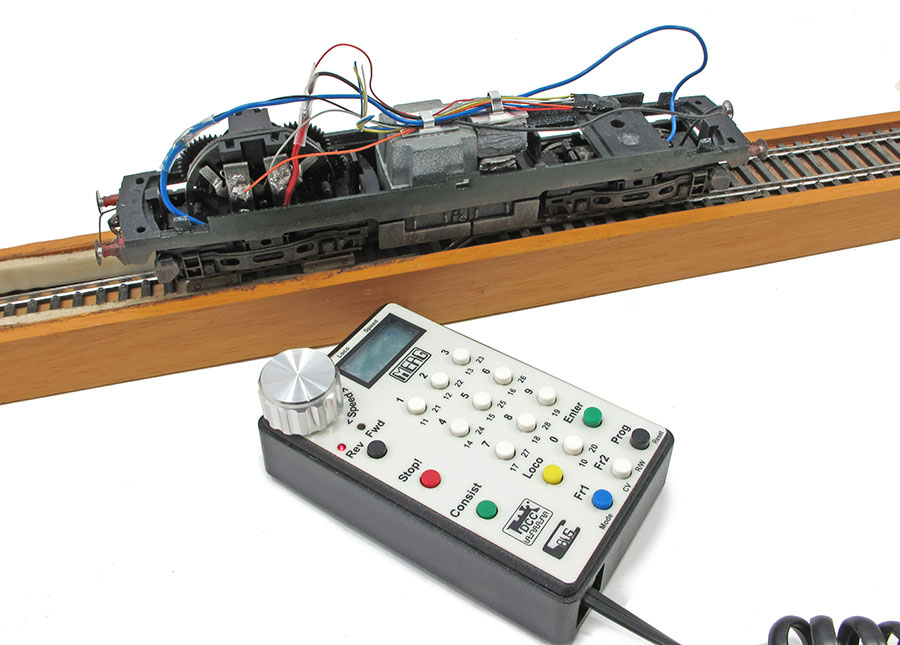 The controller might operate other accessories too such as point motors, signals and working cranes.

What are the advantages of DCC?

There are a number of advantages of DCC over DC control. Some of them are down to personal choice, though DCC offers a more varied way to operate model trains.

The wiring on a DCC layout may be simpler than on a DC layout. On a simple small DCC layout, the power can be supplied to the track through just two wires at one connection without a need to isolate sections of track. Additional wiring may be required for larger layouts to ensure a good ﬂow of current. Some DCC practitioners solder each track connection so that the entire layout will maintain a good ﬂow of electricity through the rails. The double heading of trains and use of banking locomotives is also possible with DCC.

Two trains can run into the same platform separately without the need for complex wiring. With a DC system, such a platform would need to have two separately-wired ‘isolated’ sections. The beneﬁt of this facility is even greater at a locomotive depot – an operator can put as many locomotives on the same siding at a locomotive depot as its length permits. And then he can run them around and out of the depot one by one.

DCC provides control over directional running lights of locomotives and multiple units, interior lighting effects, on board sound effects and smoke generators for steam locomotives. Some of these are possible on DC locomotives but are much more familiar and accessible on DCC locomotives.

DCC locomotive lights can be turned on and off at the operators instructions. With most DC locomotives, the lights gradually get brighter and dimmer as the locomotive builds up speeds and slows down. DCC lights are usually of constant brightness rather than needing to run a train at high speed to see the lights working as often happens with DC locomotives. Even on compact layouts, the lights on a DCC locomotive will be bright.

Some DCC locomotives additionally feature controllable couplings, opening locomotive doors and pantographs. And if you want to ﬁt (or buy carriages with it ﬁtted) carriage interior lighting, you can use DCC and it’ll stay lit at a constant brightness even when the train is stopped at a platform.

Accessories such as signals, working cranes and point motors can also be operated by DCC - all from the same controller as you run your locomotive. Some modellers do choose to operate these accessories on DC power though. The layout owner has the choice.

For more advice about wiring your layout, watch these basic tips on working with wire in both DC and DCC.

What are some of the disadvantages to DCC?

Can I operate DC locomotives on a DCC system?

Usually yes. Some DCC controllers permit one DC locomotive to be operated though the layout is wired for DCC. Check the manual to see whether your DCC system permits this. The downsides of this are that the DC locomotive emits a buzzing sound when used with a DCC controller that doesn't occur when the locomotive is driven under DC power.; 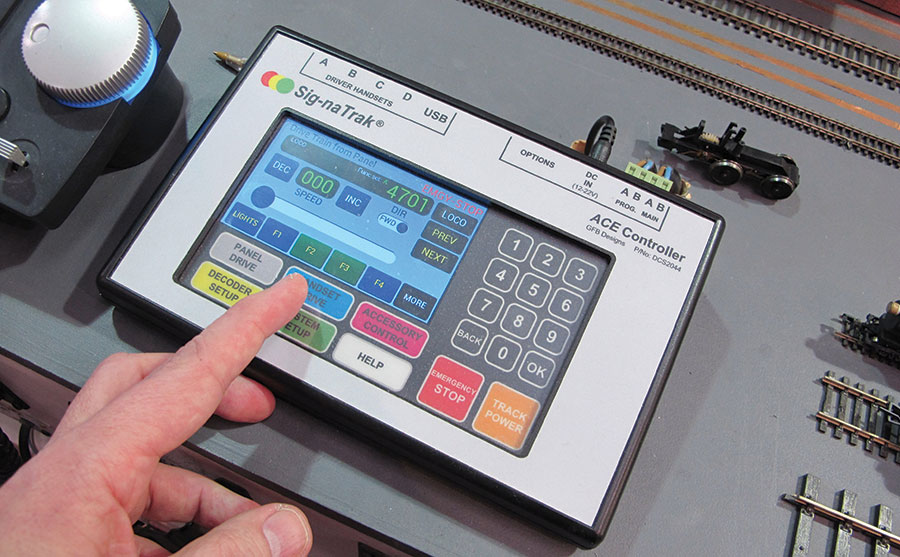 What does ‘DCC ready’ mean?

You’ll often see new locomotives specified with either ‘DCC ready’ or ‘DCC fitted’. Put simply, ‘DCC ready’ means the locomotive has a socket fitted which is set up ready for a DCC decoder. The locomotive can also still be used on a DC layout.

If the locomotive states it is ‘DCC fitted’, that means the model already has a socket and a decoder already fitted, so will be ready to use on a DCC track immediately. These locomotives usually cannot be used on a DC track.

How to fit DCC sound decoders

DCC sound decoders are available with a range of steam, diesel and electric sound projects pre-loaded. Most are easily installed into DCC-ready models, so long as they fit into the available space. They make updating locomotives simple and are available from a variety of manufacturers with prices to suit all budgets.

Many modellers are put off by the idea of fitting their locomotives with sound because they’re concerned that a great deal of work will be required, however, that doesn’t always have to be the case. There’s also a level of flexibility if you stray from the basic kit.

How easy is it to convert old locomotives to DCC?

A lot of locomotives today come ‘DCC ready’, but if you’ve got an older locomotive that isn’t, there should be plenty of advice and guidance on manufacturers website on how to convert the model.

Read our article on how to convert a J64 to DCC.

If you still have any questions regarding DCC that we’ve not managed to answer here, there are a number of articles available in our dedicated section here.

If you’re after more hands-on advice on setting up a DCC decoder properly, view our easy-to-follow tutorial here.