There are around 1600 Methodist churches and chapels dotted around the UK, often located in remote areas with very small congregations, so they did not need to be big buildings, making them an ideal subject for a model to enhance a garden railway. We build the 1/19th scale Modeltown kit.

At first glance, this looks like a very nice kit, with lots of nice deep mortar lines, and in-built mould details like the circular windows near the apex of the roof on the end sections. As well as receiving the basic four walls and two roof sections, we also received a one-piece vestibule moulding. This could be incorporated into the building as a second side entrance (but covering the middle window) on the side walls, or added over the main entrance door (covering it up), or indeed left off completely.

We opted to add the vestibule to the right-hand side of the building when viewed from the front where the main door is located. There are a lot of really nice arched windows to paint in this kit, and also provided is a generous amount of plastic glazing material, which has faux leading printed onto the surface. 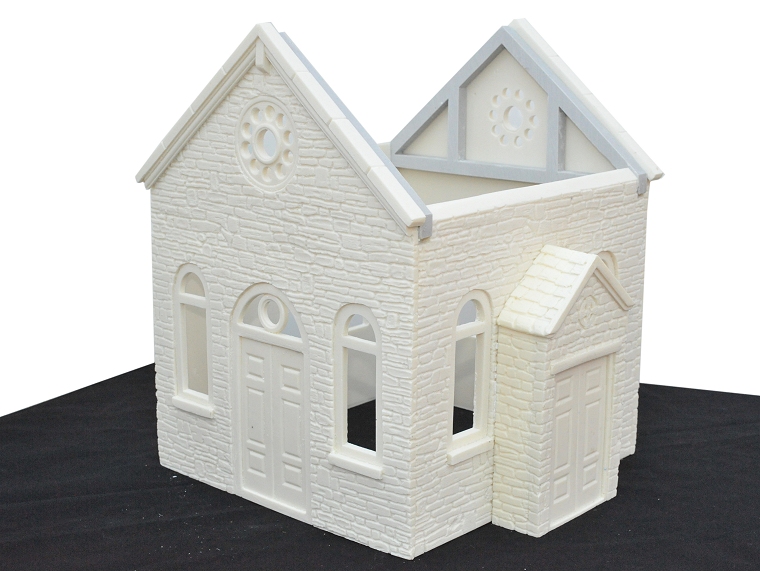 Building the four walls first, after gluing them together, we inserted the mouldings of the rafters into each end of the building. These serve two purposes. They add strength to the overall construction and they also provide a ‘shelf’ for the roof sections to sit on. We clamped these components so they set square and true. They need to be as if they sit too proud, the roof will not fit flush to the capping stones on the wall sections.

Before painting the building, we masked off the sections of these that the roof would be eventually bonded to, wanting a paint-free surface for the glue to grab onto. A coat of grey primer was dusted inside the chapel and a dark grey (almost black) etch-based primer for the exterior. To create a really dark looking stone effect, we sponged over some dark grey onto the walls, just picking the odd stone out with some lighter grey. 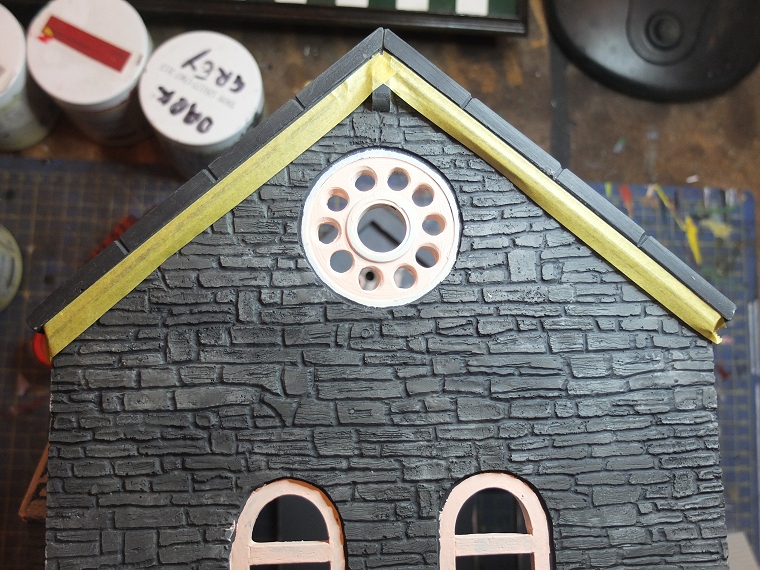 John Wedgwood, of the famous family of potters (Stoke-on-Trent, not Hogwarts obviously), was an active Methodist, so in recognition of this, we have used Wedgewood Blue to brighten things up on the doors and gable ends of the chapel. The Valspar paint reference is actually called ‘Something Borrowed’ and isn’t quite right, but it’s close. We used the colour ‘Faded In time’ for the windows, and matt white for the window sills. There was quite a lot of painting on this kit, made easier by clear delineations on the mouldings between the windows, doors and stonework.

When it came to painting the roof, we wanted to create a weather-worn look so sponge-painted matt white over the dark grey undercoat, then, whilst the white was still wet, sponged in some mid-grey. It's best to work diagonally over the roof so that the tiles don’t look too uniform in their appearance. Don't overthink this process, work pretty quickly before the paint dries. 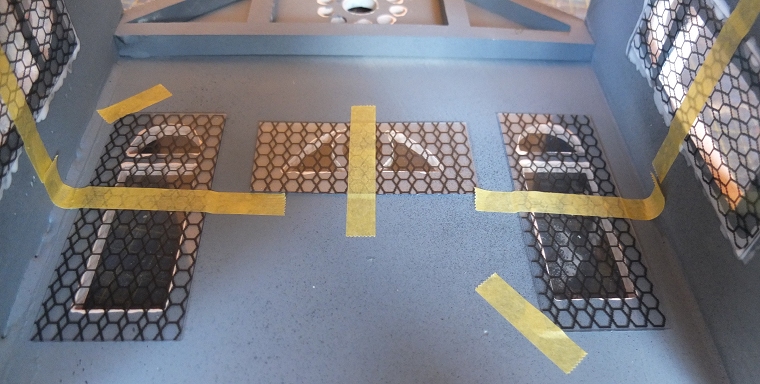 Some nice faux lead glazing is included with this kit. After placing the glazing in situ, and holding it in place with masking tape, we used a ‘dries-clear’ glue to secure it into position. You can buy ‘canopy glue’, which is favoured by model aircraft modellers who use it to secure the see-through cockpit canopies on scale aircraft.

Final details include printed signs, emblems and embellishments. We added two round Methodist symbols to the high round windows at each end. These were scaled in Photoshop as were the other signs: the blue sign on the vestibule door and the date inscription to the right of that. The religious inscription was researched online and did exist. 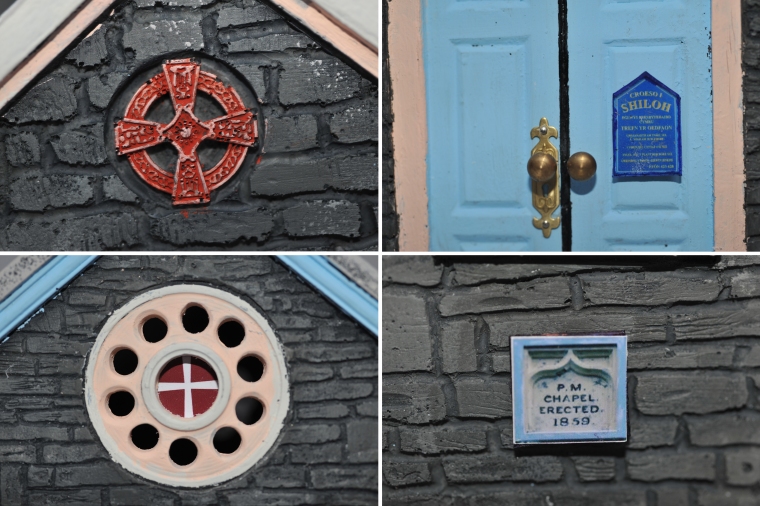 We added door knobs and locks to both doors. These are doll’s house shop finds, and a little over-scale at 1/12th, but provide a fair representation of the real thing. Finally, the Methodist emblem, which was moulded in above the vestibule door, is picked out in colour. This was no mean feat as it only measures 18mm in diameter.

You don’t have to have a Welsh-themed garden railway to make use of this chapel, as they abound everywhere. The northernmost chapel in the UK is located at Portessie, just to the west of Fraserburgh in Scotland; the southernmost is in Penzance.