Do you remember working steam engine on British Rail? If so, the chances are you are heading for retirement since the last one ran in 1968. Since then, the rail network has been powered by diesel or electric traction, but model railway layouts without a steam loco are still described as “modern image”. It's almost as though we're still waiting to see if diesels catch on or are a passing fad!

One group who are aren't looking back at steam power are the members of DEMU, the Diesel and Electric Modellers United. This years sees the societies 25th year and the move of their annual showcase from the characterful but restrictive Burton-on-Trent town hall to the wide open spaces of Green Bank Leisure, Swadlincote.

BRM caught up with founder Gareth Bayer and the current editor of in-house magazine, UPDate, Kelly Harding, to find out about DEMU.

BRM: How and why did you set up DEMU

Gareth: When I got back into the hobby after university I was stuck in the middle of Norfolk and feeling very far from other guys that were into modern diesel and electric era modelling.

I wrote a letter to the ModelRail supplement (then in Rail magazine) asking if anyone wanted to form a modern modelling group in East Anglia with the purpose of building a layout. While nothing came of that it did put me in touch with Nigel Jordan, Steve Grantham and Alan Monk, who had also been talking about starting a modern modelling group. They'd made a similar plea in a 1993 issue of Model Railways.

They ultimately decided they were too busy to start anything, so passed the baton (and the name) onto me.

I produced the first issue of the UPDate magazine (which we called "preview issue 0") with Tim Horn in Nov/Dec 1995. Phil Eames had come on board to write material at that point, and I think Simon Bendall followed quickly after. It was technically just a magazine at that point. There were no "members", only subscribers.

We did our first roadshow appearance in September 1997 (Rail Express ‘97 St Albans).

Simon Bendall volunteered to become membership secretary in Autumn 1997. We proposed to change subscription of UPDate to membership of DEMU and this took plate in April 1998.

Kelly: DEMU covers modelling and prototype ranging from the 1955 modernisation plan to the present day. The society is not gauge or scale specific and all are welcome, as are all abilities.

The majority of content submitted to UPDate is however predominantly 4mm. As Editor I've been trying to balance the three main scales with prototype information, but it has proven difficult to do so due to lack of content, especially in 7mm.

BRM: Is there a growing interest in diesel and electric modelling?

Kelly: Personally I think there is. Steam will always have a popular following no doubt, but a lot of modellers I find tend to model what they grew up with or remember from a particular point in their lives. I've noticed a lot of people for instance who are using YouTube are focused on D&E periods.

My own modelling interests are generally in the D&E genre, but as I am very interested in history generally, I have not limited my personal interests to one period, though initially it will be the 1960s for my modelling projects currently being worked on, but will feature the 1980s and 1990s later too.

BRM: What does DEMU provide for it's members? (Support, magazine etc.)

Kelly: The primary item DEMU membership provides is UPDate magazine. This is published four times a year and is a 36 page A4 colour magazine. The content is provided by members, with very few exceptions.

Content featured has included prototype articles with in depth information and scale plans, historical articles (such as the APT-E articles written by Kit Spackman), scratch building and kit bashing articles of varying complexity.

The magazine is currently at it's 90th issue (at the time of writing it is about to go out to members, and issue 91 might be with members by the time this is published), and this leads onto the other benefits of membership.

The society has its own forum and wiki that are only accessible to members. The forum often has in depth threads about layouts and modelling projects, some of which end up in print. The wiki has a number of items of information on it, but so far has been a underused resource although this is changing. It does have the archive of UPDate, with PDF copies of all previous magazines available for members to download (except for the 3 most recent issues).

Finally, members get reduced entry to the society's annual show, Showcase, held on the first weekend of June, this year it moves to a new venue in Swadlincote, roughly 6 miles from the previous location for many years of Burton-on-Trent. 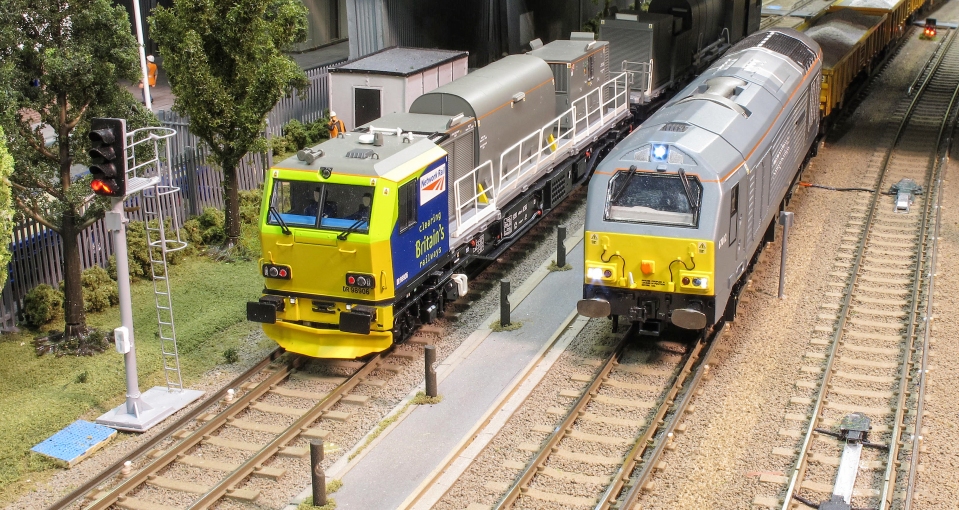 BRM: Who is the average DEMU member?

Kelly: I don't think this is such a thing as an “average” DEMU member. We have members of all ages, all occupations and all abilities. I suppose our average age might be a little lower than other societies, but not much.

The main thing is that everyone is keen and helpful. Our forum is pretty active so if a member posts a question, they can be sure to get plenty of answers, most of which will be helpful!

BRM: With most classes of diesel and electric locomotive available RTR, doesn't that limit the modelling people need to do?

Kelly: Not at all. Despite DEMU helping out manufacturers with information, sometimes the RTR offerings aren't perfect and our members enjoy using aftermarket parts to improve models bought from the trade.

You can't buy all your rolling stock either. There are still plenty of gas in the selection of models for sale which need to be filled by kit or even scratchbuilding. DEMU offer a drawing service to members, vital if you fancy breaking out the Plastikard and building something for yourself.

We're also into more than just rolling stock – most of our members are building layouts and that means understanding the entire scene. You can't just plonk details down and expect them to look right, but we'll help you as some of our members are professional railway workers who really know their stuff.

BRM: How can readers tempted by DEMU membership find out more?

Kelly: The obvious place to start for most will be our website: www.demu.org.uk You'll find details of our area groups and shows and non-members can read our forum to see what we are talking about.

We have demonstration stands at many of the major shows around the country manned by modellers, usually working away on projects and chatting to anyone. Meeting people like this is really important and how we recruit most of our membership. I like think that once you've found out how friendly we are, you'll be keen to join in the fun.

BRM: Thanks Gareth and Kelly for your time.