It's June 1 and on a spacious new industrial unit on the outskirts of the Bradford/Leeds area, the weather is warm for the open day at Frizinghall Models and Railways. Adjacent, the loading bay entrance to the warehouse of its sister company, John Ayrey Die-casts, a wholesaler and not open to the public, is emptied of boxes and pallets to house a small exhibition of layouts, and practical demonstrations. Smartly turned out in their black and red tops, the staff are dotted around the premises, there to assist arriving visitors with questions, advice or provide a tour.

Through the doors of the shop, I head upstairs to a mezzanine floor - a large space with impressive levels of stock managed by Susan Sanderson. It isn’t long before I cross paths with Norman Hinchliffe, Susan's brother-in-law, Managing Director and a family shareholder of both businesses. I’m provided with a warm northern welcome – tea and cake! What’s not to like? "Follow me", he says, "I'll take you on a tour".

The premises, just three years old, are home to John Ayrey Die-casts, with a history dating back to the 1950s and Frizinghall Models and Railways, a more recent arrival after the business was bought by the owners of John Ayrey Die-casts in 2017 and re-located to the more modern building. Though both companies are run separately, they are run by the same family and a loyal team of individuals who have known each other for many years. The result is an efficient, but friendly atmosphere in the team. 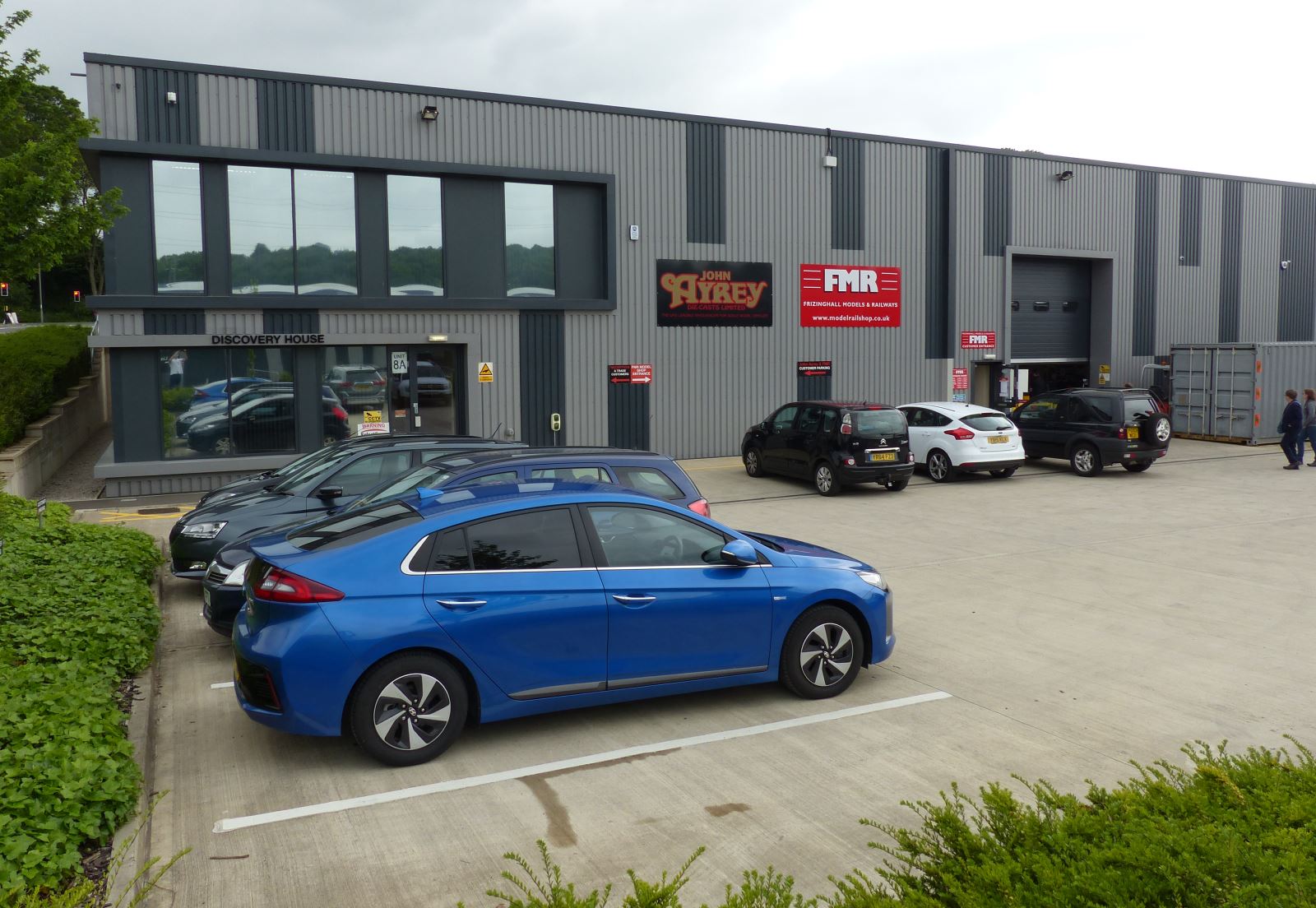 Discovery House, Baildon BD17 7AX, home to Frizinghall Model Railways and John Ayrey Die-Casts. With ample parking and easy access to and from the A1, a visit is highly-recommended for collectors of die-cast and railway models alike.

We arrive at the mezzanine floor where Frizinghall Models and Railways keeps a well-stocked supply of all the latest RTR models, kits, scenic items, track and control accessories. By the counter, is one of the largest stocks of paint I've seen in a model shop for a long time. Always the sign of a good model shop, such essential items are bread and butter when making a model railway, building kits, or repainting die-cast models. 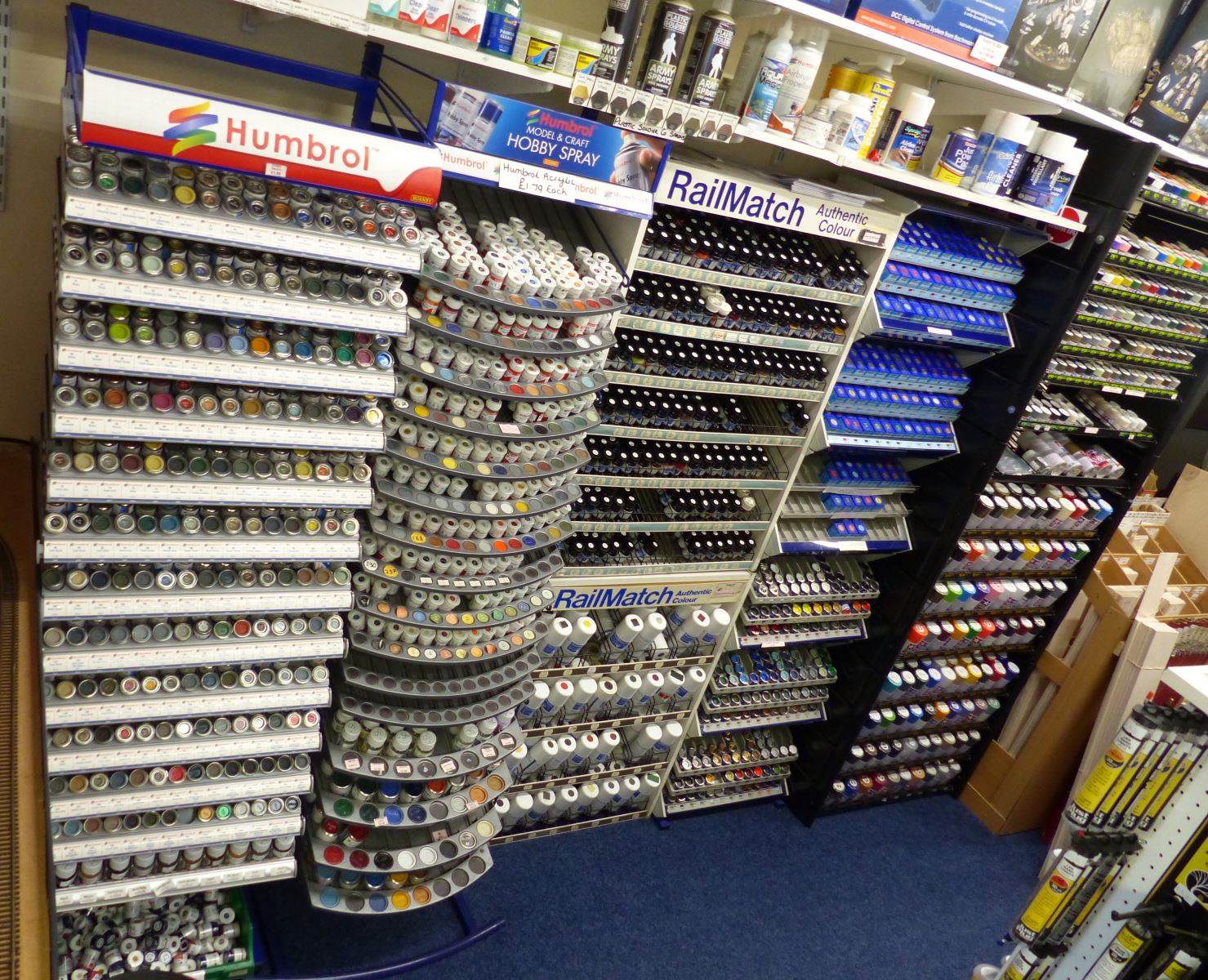 A comprehensive selection of Humbrol Enamel, Humbrol Acrylic, RailMatch Enamel, Revell and Tamiya paints are available to buy in-store at the shop.

Around the corner, a large selection of kits is on shelf, above well-stocked shelves containing the latest RTR models from Hornby, Bachmann, Metcalfe, Woodland Scenics, Peco (including Ratio and Wills). A range of well-lit display cases are used to showcase the latest RTR items and the friendly staff are available to help customers make an informed choice. Customers can choose to have their decoders installed in-store, too, with a choice of sound or non-sound variants. 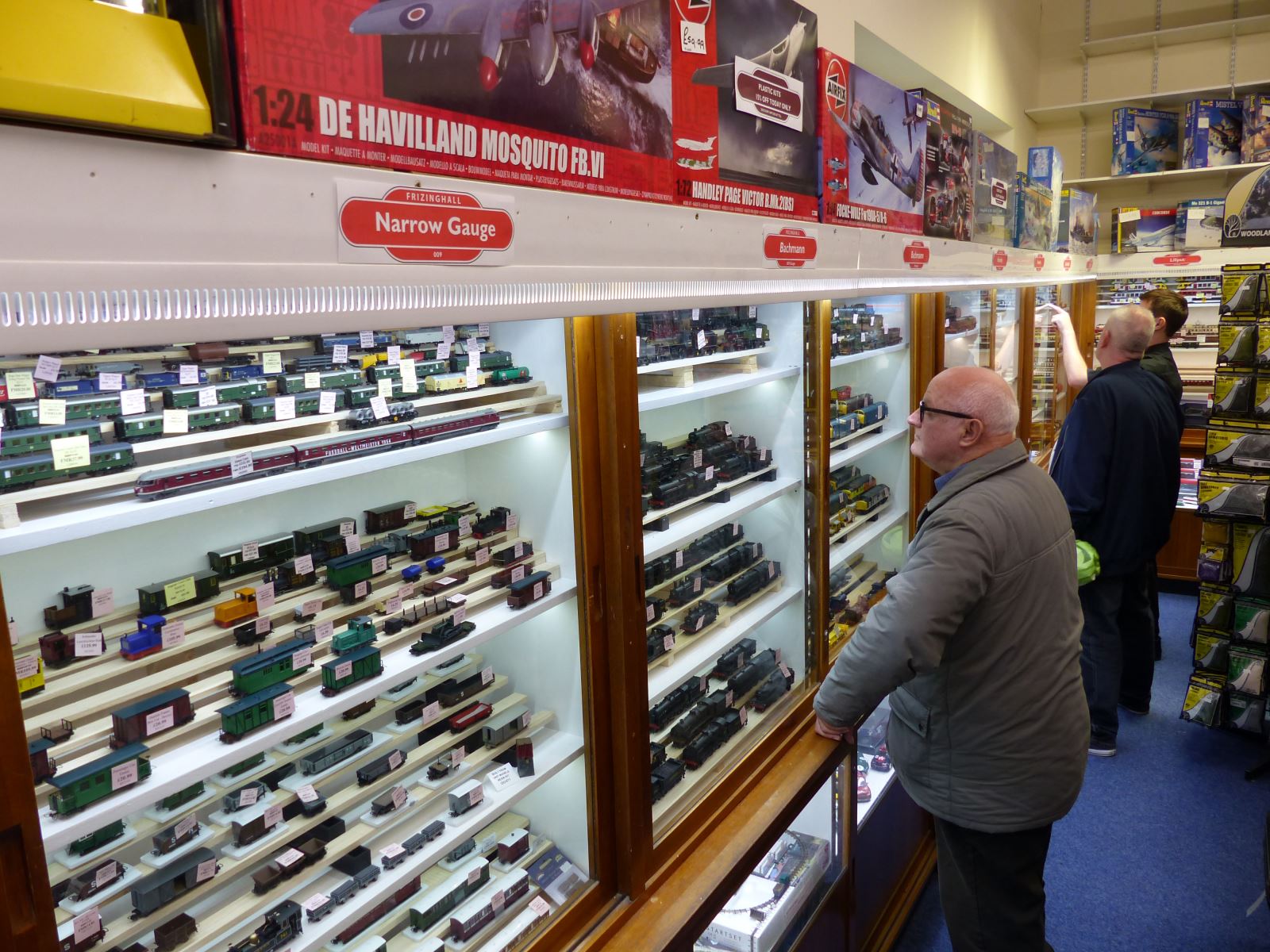 Take your pick. Behind the expanse of boxed RTR items on shelf is a display cabinet where customers can see the latest RTR items without removing them from boxes. It ensures the model you receive boxed isn't damaged through previous handling.

In 2016, John Ayrey Die-Casts took over the resin accessory business of Unit Models, following the passing of its founder, David Hewitt. I ask Norman about his plans with this range. "We're continuing to keep the levels of stock from this versatile range that customers expect. Like any range you acquire, it's difficult at the beginning to know how fast each item sells, so we cast plenty of each. Only now do we know how many to produce of each." I ask if he plans to develop the range. "Yes, I'm really interested in 3D printing", he exclaims. We bought a small 3D printer and have been developing the range in 3D, with a view to printing the models for OO, O and OO9. The printer we have is turning out nice models, though we're looking to upgrade it soon." Seeing some of the painted models on show, I ask how these are produced. "My son-in-law paints the models by hand, some of which are weathered, too." 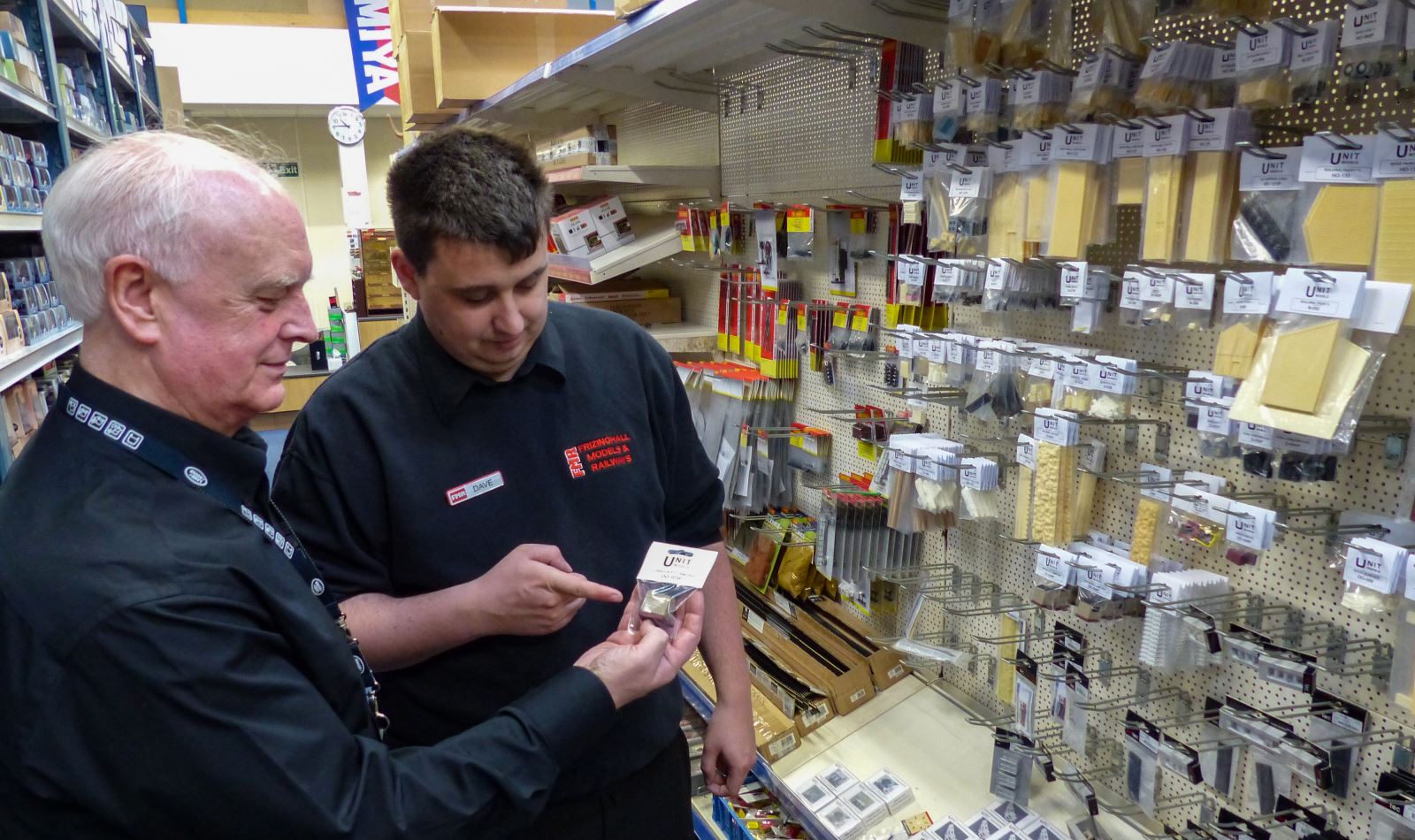 Norman discusses the latest batch of models to join the range of Unit Models, a range acquired by John Ayrey in 2016. 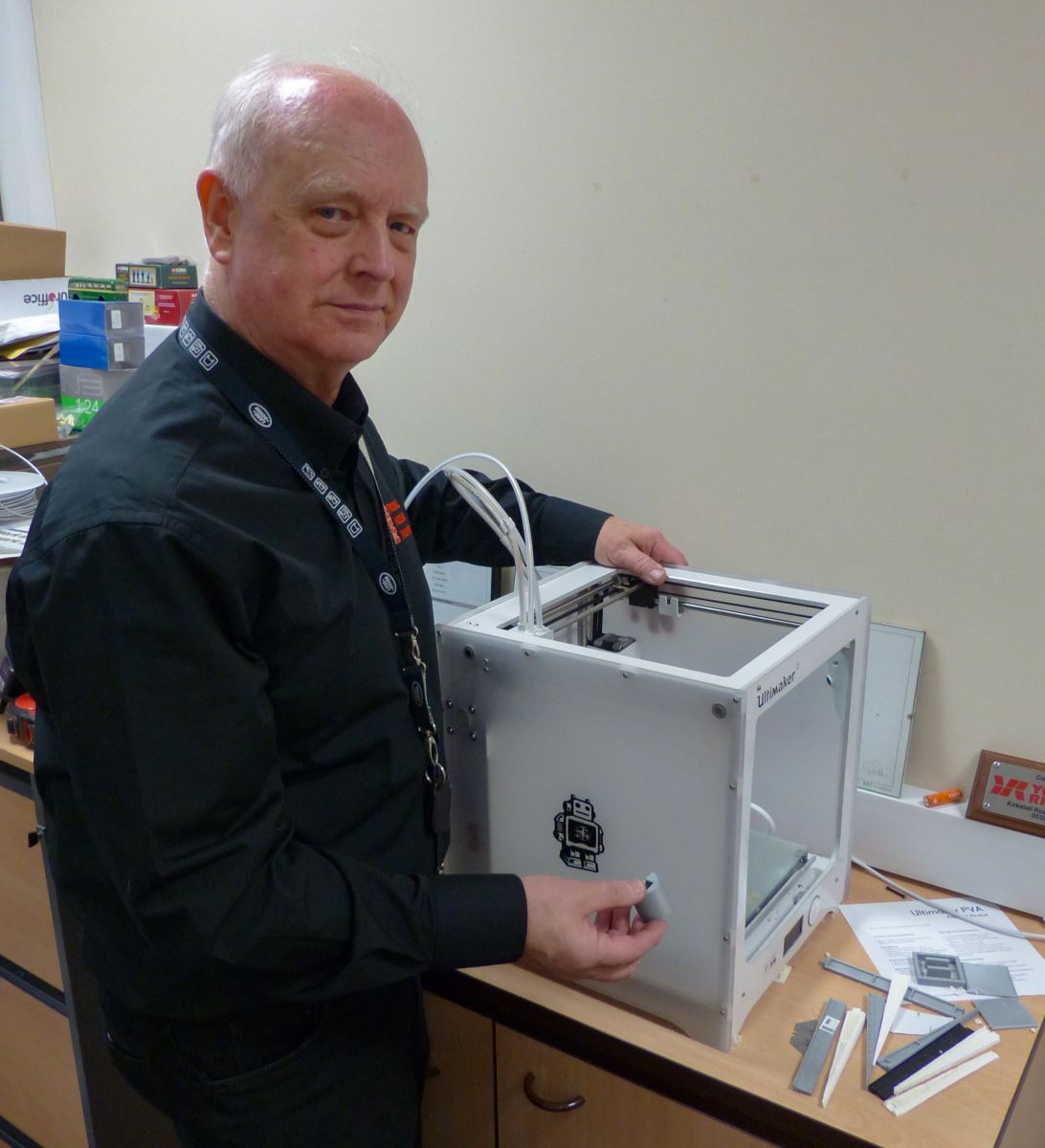 One of two Ultimaker 3D printers which reside in Norman's office. This small side-line is one of his pet projects - proof that the Unit Models range isn't being neglected.

Our tour takes us to the loading bay of the John Ayrey Die-Casts premises which has been transformed into a small exhibition. Though usually closed to the public, this space has become an extension to Frizinghall Model Railways shop for the day. The model shop has good relationships with the local model clubs, and supports them where it can.

The N gauge layout, 'Ryburn Bridge' was originally constructed by Peco in 2011 as an exhibition layout, after which it was placed on loan and exhibited at various model shops. Being based on West Yorkshire practice, it was collected, though was showing its age. The backscenes were faded, the scenery was fairly basic and relied on scatter materials. "We re-furbished it and decided to bring it up-to-date, using static grass and various items that weren't available when it was built." says Norman. "We wanted it to be an inspiration to customers, so we have used commercially-available products from the shop wherever possible, avoiding scratch-building that might frighten new modellers", he continues, pointing out various items on the layout, such as Train-Tech's signals that have been adapted to suit the smaller N gauge layout. "We also want to show the potential of DCC and the ease of applying it to existing layouts. It was constructed in the traditional way for a DC layout, with 16 individual sections. We have simply switched all the sections 'on' and then used DCC for the whole layout with no other modifications."

Knowing what you're selling is paramount in retail and it's clear that Norman and the team at Frizinghall Model Railways are very clued-up on their products. Virtually all the FMR staff have model railways of their own and are passionate about the hobby.

"David Harris has brought 'Bradford City Road' and Joe Tarver is operating 'Ryburn Bridge'." David volunteers on various railways, including KWVR, the Embsay & Bolton Abbey Railway, Kirklees Light Railway, and more recently he is working at the Bala Lake Railway. Joe Tarver is the West Yorkshire working party organiser for the Ffestiniog Railway and works every month on the permanent way. 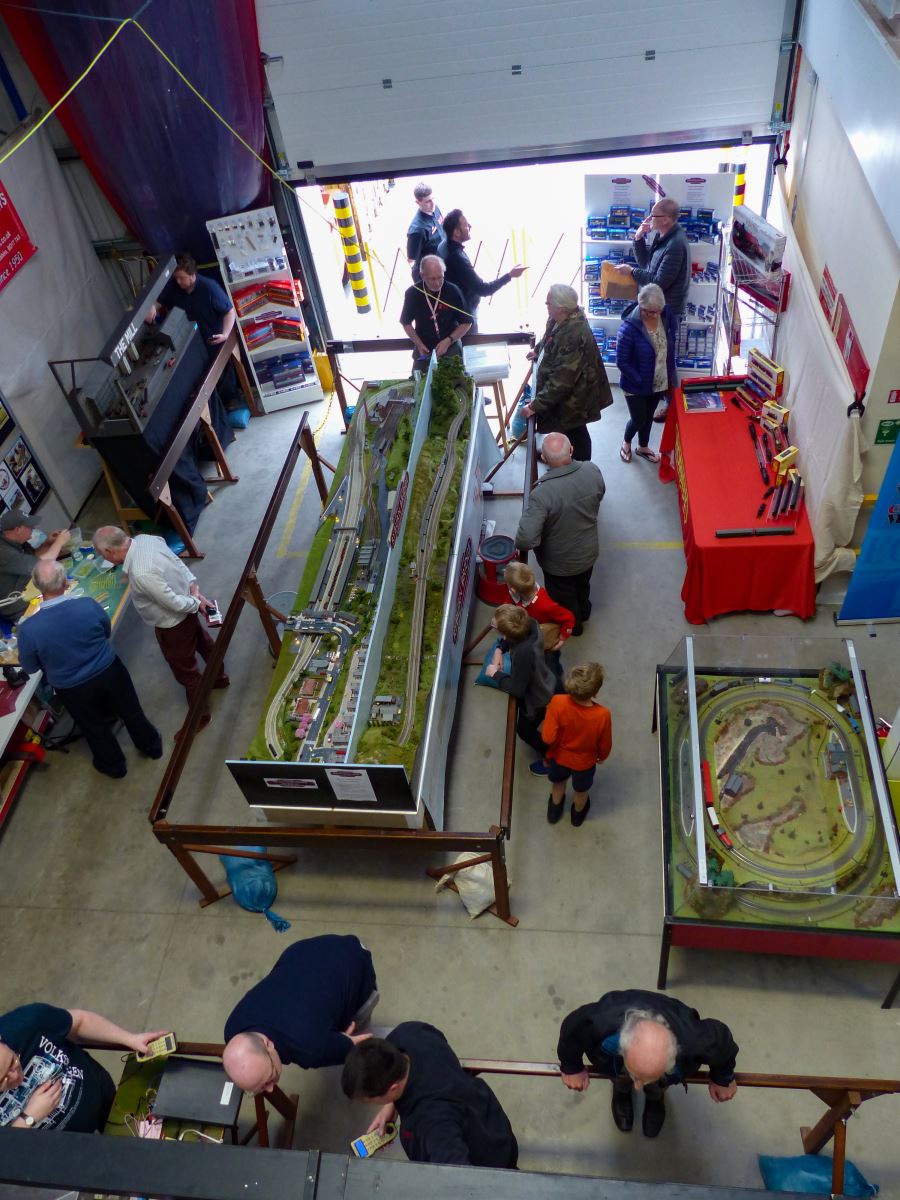 A hobby that continues to fascinate young and old - a variety of exhibits of different vintages provide a visual spectacle during the open day. In the centre, 'Ryburn Bridge'. 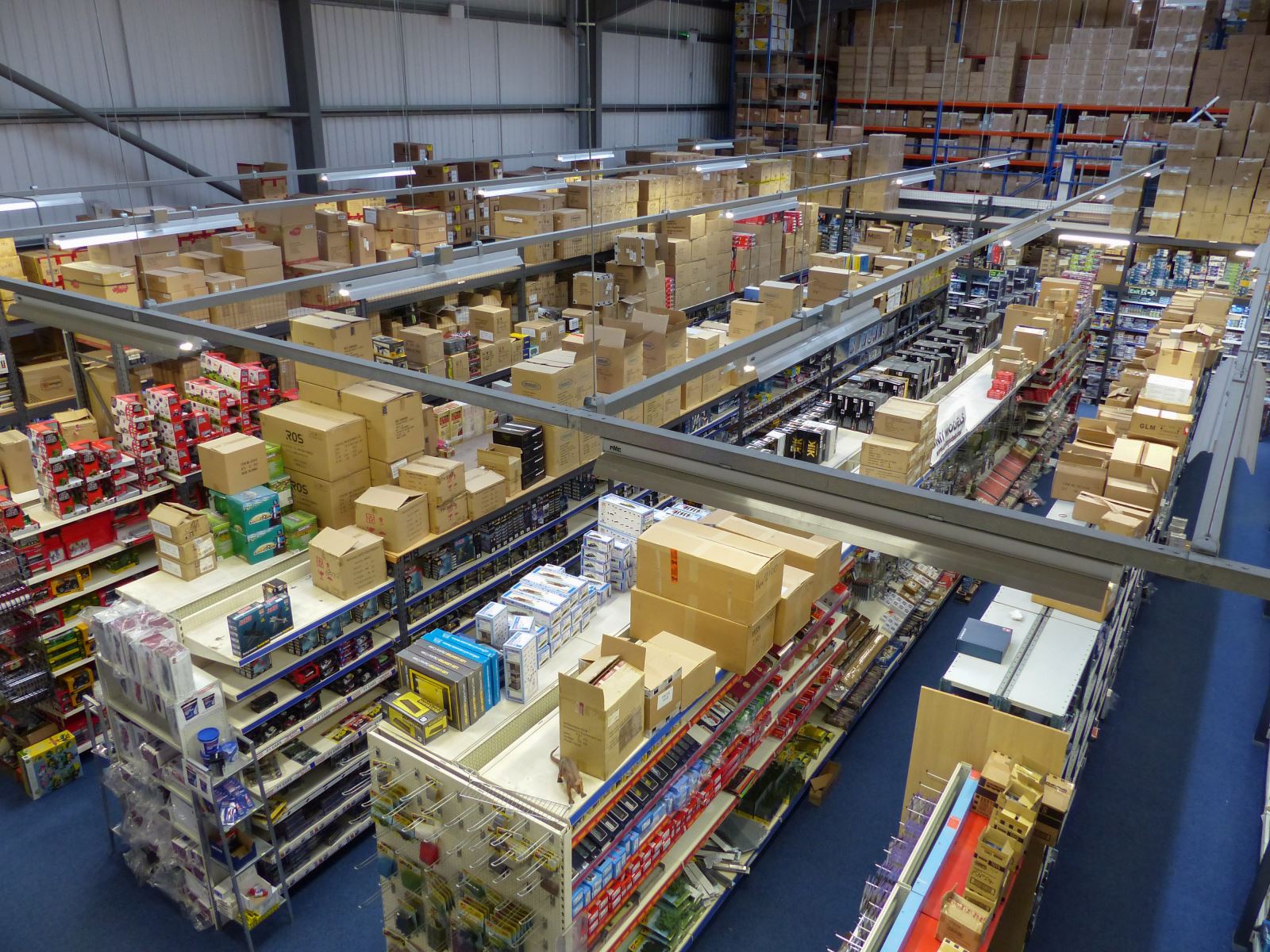 A view of a section of John Ayrey Die-Casts' warehouse. The wholesaler ships its stock of models to model shops around the UK and overseas, though they can also be purchased in the Frizinghall Models and Railway's shop, adjacent. 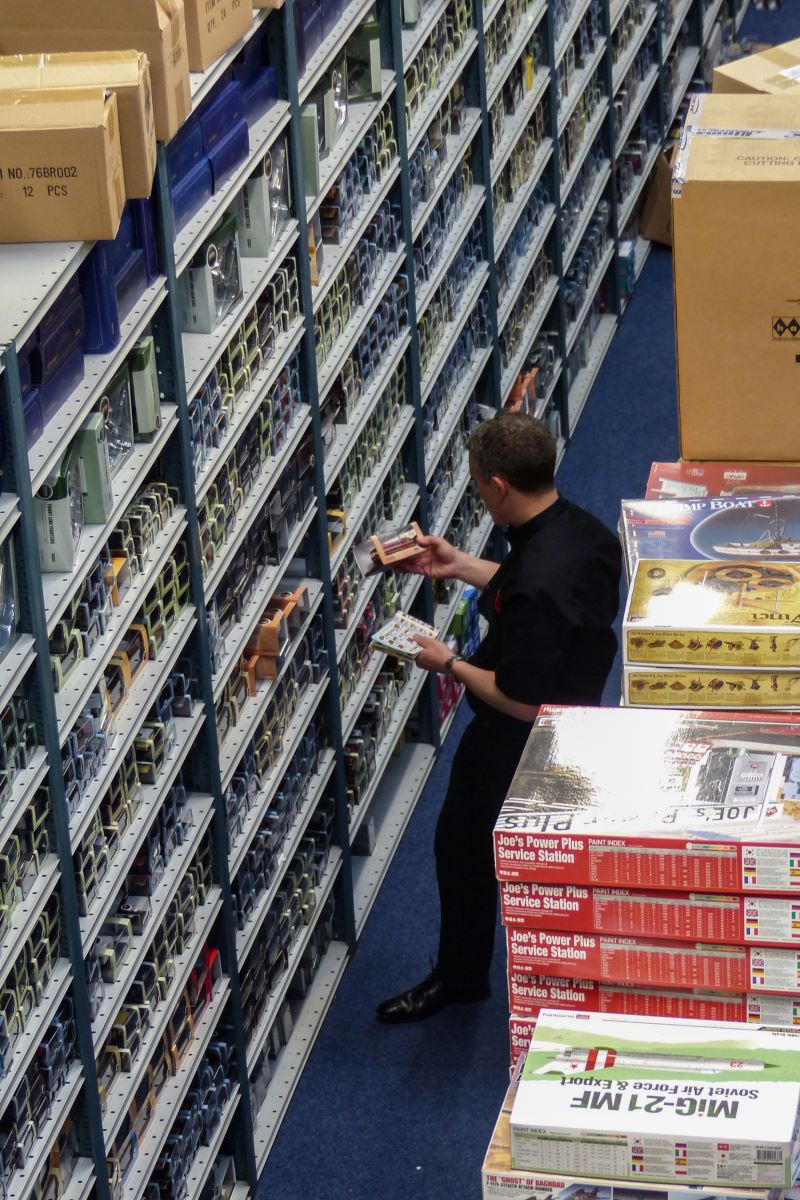 Items are hand-picked for dispatch around the world. It allows Frizinghall Models and Railways access to more stock than the shop could justify, such as Oxford Diecast, Oxford Rail, Hornby International, Busch, Heki, Javis, Artitec, B-T Models, Unit Models and a large range of plastic kits, die-cast models, paints and adhesives.

The warehouse is a vast space and covers every brand of die-cast model you could possibly imagine, from buses of which Norman is a great fan with a background working for Plaxton, to construction models, cars, tractors and more - all of which are suitable for your model railway subject to scale.

Before departing, I briefly meet Norman's son and daughter, the next generation of the family to run the store as Norman takes a step back into semi-retirement. Both are keen to become more involved with the day-to-day running and have grown up around retail, Heather being involved since the age of 12. 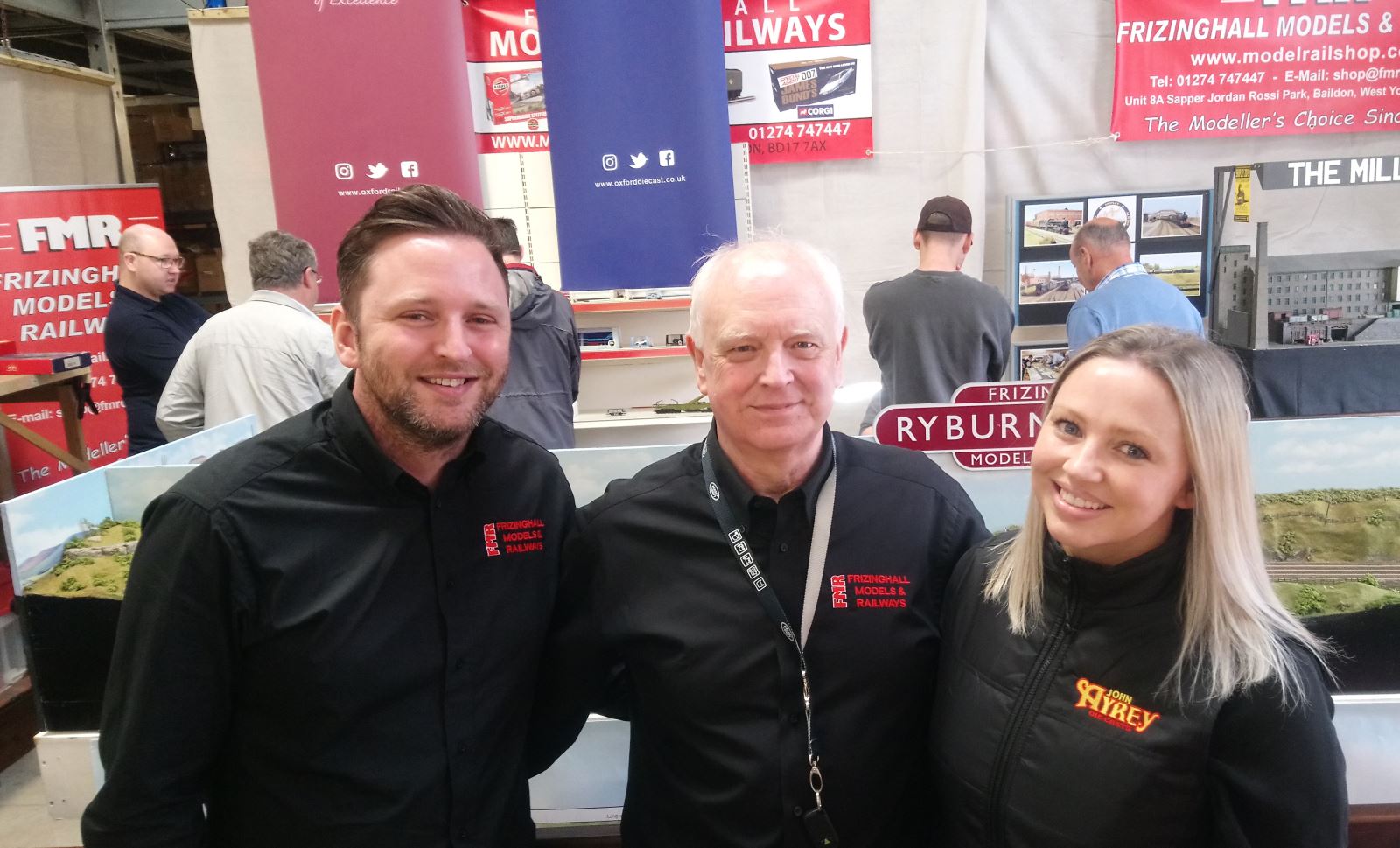 Changing of the guard. Norman will soon hand over the day-to-day running of Frizinghall Model Railways and John Ayrey Die-casts to his son, Iain and daughter, Heather.

Frizinghall Models and Railways is a shop that's worth visiting for the sheer choice of items available and levels of stock. Whether you're passing or making a special trip to the shop, you won't be disappointed. Highly recommended.