How to create cameo scenes 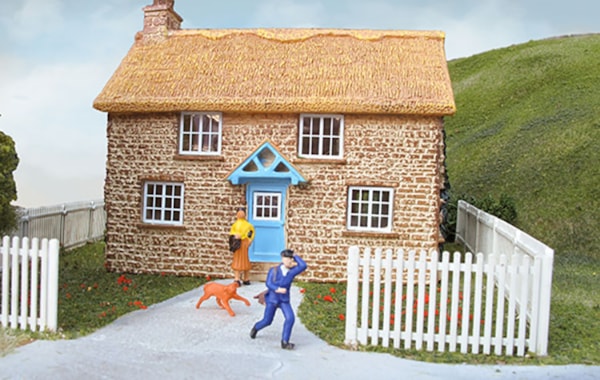 How do you engage a non-enthusiast looking at your layout? Phil Parker presents a collection of fun scenes to captivate audiences, young and old.

Is there anything that says your layout is set in 2020 more than a cameo of figures buying all the toilet roll from a supermarket or local shop? 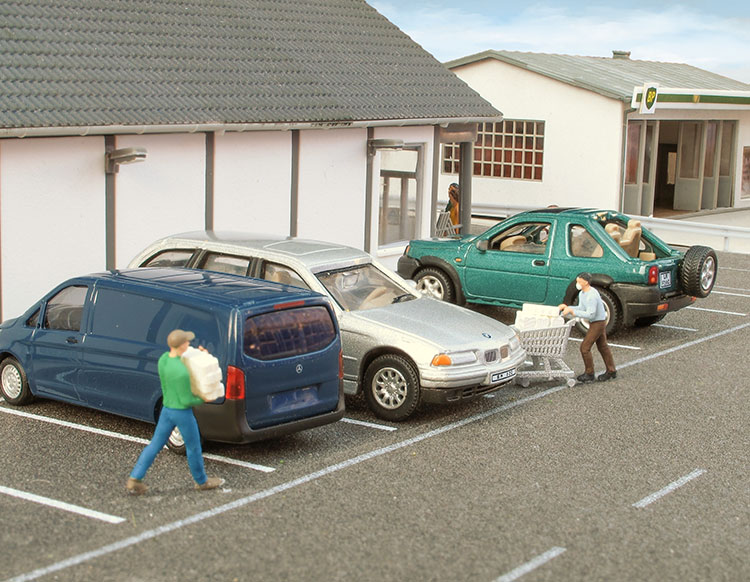 Both the man with the van and the man with a well-loaded shopping trolley are from the Busch range of scenes and come with extra signage to decorate your shops. Strictly speaking, they are HO scale (3.5mm:1foot) so slightly small for 4mm:1ft, but people are all sorts of heights, so won't look out of place in a car park. 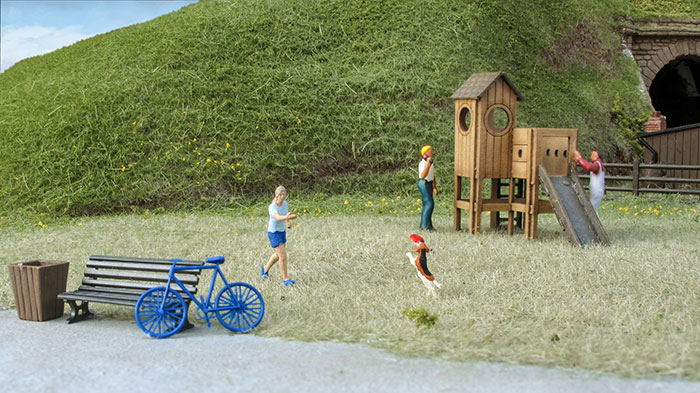 Instead of chasing cats, it's far more civilised for a dog to be catching a Frisbee. Frisbees are post-war toys, not becoming popular in the UK until the 1960s. Before this, British dogs had to be content with chasing sticks.

In the background, workmen paint a children's climbing frame. Painting is a classic cameo subject. Add a man holding a brush and you can save yourself the bother of weathering a model, perhaps even making it shiny. 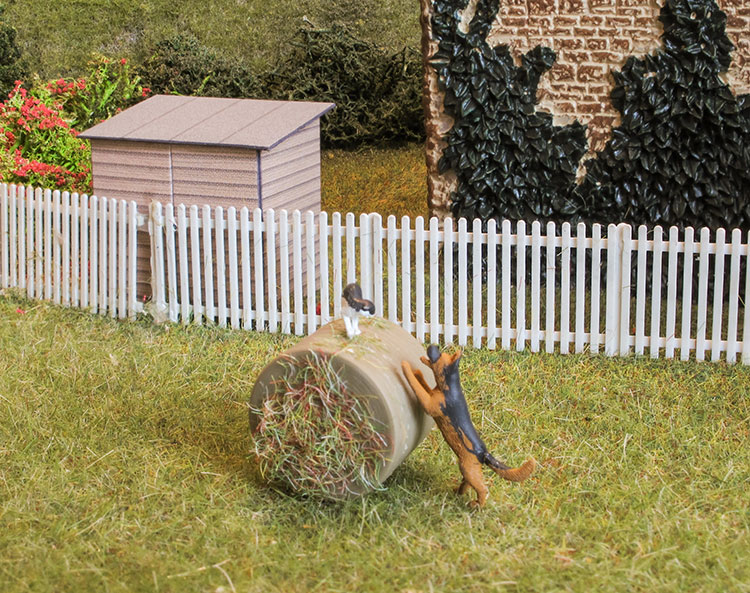 Dogs chasing cats might be a scene that has been around forever, but the round bale of hay is a more modern invention, not being seen in the UK until the 1970s. For a steam-era layout, you would be better with rectangular bales. Of course, this only applies if your layout is set in late summer when the hay has been cut. 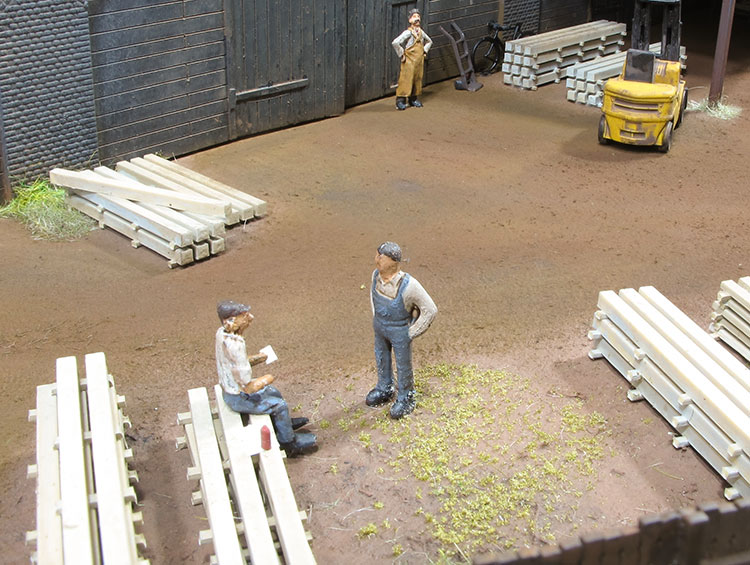 It's lunch break in the timber yard and a worker is sitting on a pile of wood, munching on his sandwich while chatting to his mate. This scene takes a little bit of work since no-one makes a miniature person holding food, but a tiny piece of plastic glued to his hand will do the job.

Besides the figure, there is a piece of cigarette paper underneath more plastic sandwiches – we assume the real food would be wrapped up somehow, although you may prefer to model a lunch box. His flask is a piece of plastic rod, shaped slightly and painted. 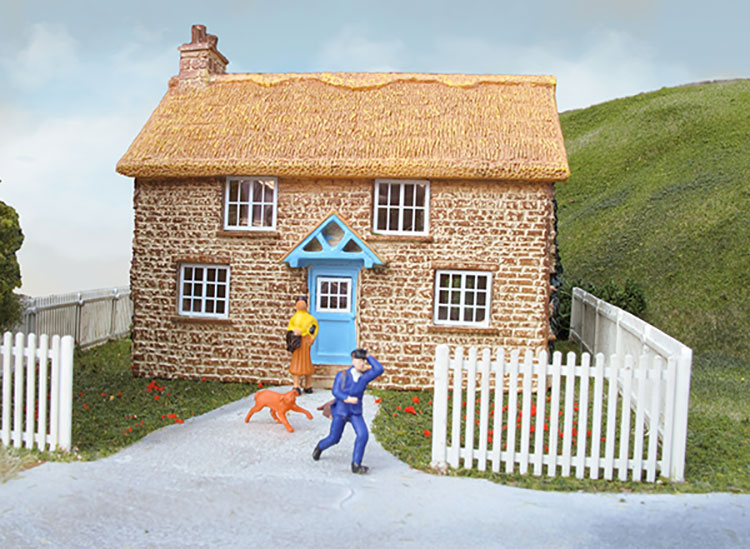 This one's not funny if you're a postman. Fortunately, this one seems able to outrun the plastic pooch, who probably only wants to play anyway.

Like many of the cameos, this scene suffers a bit from having someone frozen in time – that is, stationary, when he should be moving. It's generally more realistic for figures to be posed in a way that looks more natural when they aren't moving. That said, these scenes make people smile, so perhaps they aren't so bad after all? 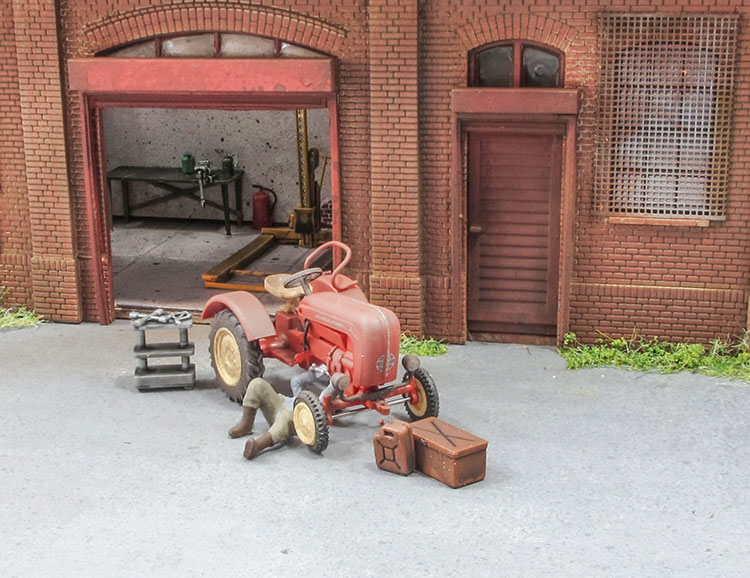 A perfect scene for any farm or workshop – a hard-working mechanic lying under a vehicle and 'attacking' it with a spanner.

Pedants might point out that the tractor under repair is a Porsche design, and they stopped making farm machinery in 1956. It's also not a common sight in the UK. Substituting a Ferguson or Fordson machine from Oxford Diecast would make it more typical, but perhaps the neatly organised tool tray suggests this is a tractor enthusiast rather than a farmer, and he might prefer something a little more exotic.