Our beloved manufacturer of model railways has reached its centenary. We reflect on landmark creations from its history.

A look into any history of model railway businesses in this country will soon reveal a complex and intertwined genealogy of new businesses, mergers, dissolutions, acquisitions and inheritances, which would truly take an ample volume to record and illustrate. I'll simplify what this means in Hornby’s 100th anniversary year and highlight its landmark events and models over the last century. 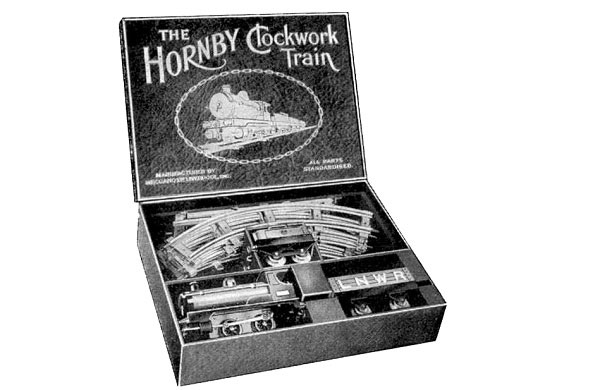 Frank Hornby’s Meccano started in 1901 and the first clockwork train set of 1920 built upon those construction principles with components that could be taken apart and re-assembled. Unlike Henry Ford’s output of the time, the set was available with red, green or black locomotives and became the first model railway many older modellers will have first played with. This was the first point at which the Hornby brand became linked to a model railway item.

With the emergence of the Trix Twin Railway system marketed by Bing in the 1930s as the first OO gauge electric railway (Bing had clockwork in the 1920s), Hornby wanted to get into the table-top railway market to suit the space available in homes of more buyers and Meccano worked towards the launch of its Hornby-Dublo range in 1938 with a tank locomotive and a Gresley A4. A very respectable Princess Coronation Class had been designed and was about to reach the market when world events overtook plans.

Meccano’s factory at Binns Road, Liverpool like so many other factories, supported the war effort and when hostilities ended, a slow resumption and a changed market saw a decline in its O gauge market. A greater emphasis was put on its Meccano construction system and Dinky cars catered for an austerity market as much as possible. 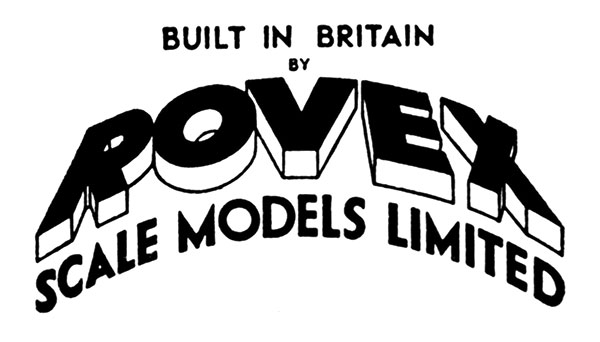 Rovex Plastics Limited of Richmond, Surrey launched a plastic electric train set for the Christmas toy market through Marks and Spencer, which sold well despite the limitations of a crude roller electrical pick-up system.

Rovex was swiftly purchased by Lines Brothers in 1951, who sought to expand into plastic-moulded toys bringing production into its Tri-ang factory at Merton before establishing the factory on Westwood Road, Margate which is where Hornby continues to trade from developing the Tri-ang Railways brand.

1957 saw the launch of Tri-ang’s ‘table-top’ or TT range at 3mm to the foot or 1/100th scale with a 'Jinty', 'Castle' and rolling stock in a further bid to entice the occupants of smaller homes, further adding to the range with a streamlined 'Merchant Navy' class by the end of the decade. 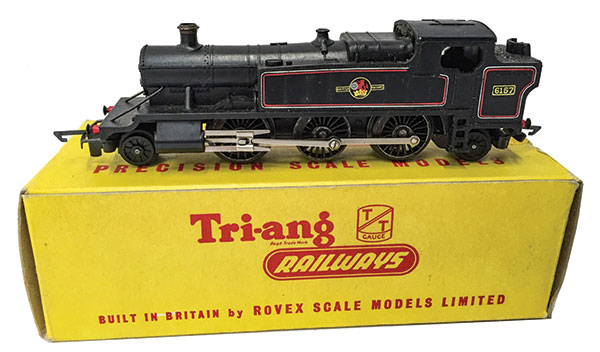 The Tri-ang TT range continued to expand with the introduction of a Brush Type 2 and 350HP diesel shunter at the beginning of the decade, with a 'Prairie' tank, more coaches and wagons and accessories following.

Further excitement followed with the 1:76 scale Minic Motorway system, which could be integrated with its OO system and its Model-land buildings and scenic items to produce a true range to entice expandability and additional spending from its customers. 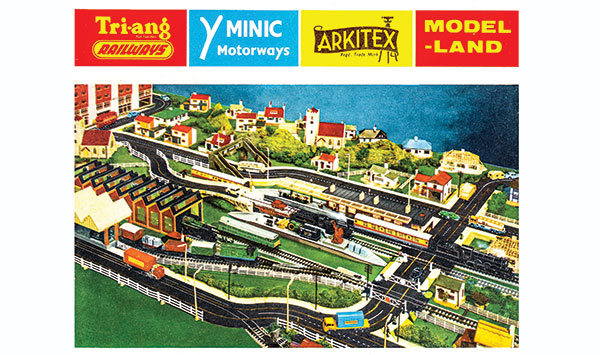 This, as much as compatibility issues and over-stocking, brought more pressure upon Meccano and the Hornby Dublo range which fell into receivership in 1964 allowing Lines Brothers to acquire the interests and become the dominant player in a decade of major development. The combined empire now became the Tri-ang Hornby brand whilst the re-packaged Dublo products morphed into Tri-ang Wrenn branding.

The preceding decade had seen the emergence of cheaper imported toys dominating the pile of presents under the Christmas tree and pocket money temptations, and so Lines Brothers suffered from competition as much as Meccano had. In a time of buyouts, rationalisations and acquisitions, Lines Brothers had to close the accounting books and the next chapter starts with the change of ownership to Dunbee-Combex-Marx and a further change in branding to Hornby Railways for the Tri-ang lineage, and the sale of the Dublo lineage to G&R Wrenn to become Wrenn Railways.

There was improvement and expansion, notably the Silver Seal range of 'Black Five', 'Britannia' and 9F locomotives with Ringfield tender-drive and increased performance in 1973, and the Silver Seal denotation to coaches and wagons that were improved by the addition of metal wheels. 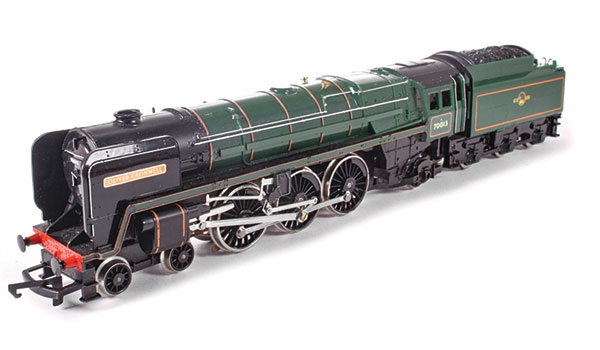 The range increased by a locomotive or two each year and established a trend that continues with Hornby of models of contemporary trains as they appear, with the launch of its model of the High Speed Train in 1977. 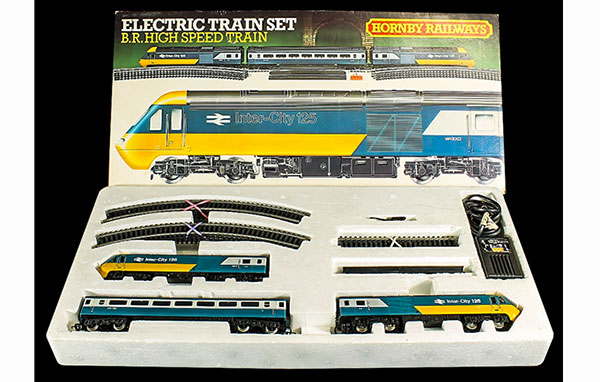 For decades the market had been used to 12V DC supply to run OO gauge model railways with simple controllers, and isolating sections and switches to create more complex layouts. A revolution came in the final months of 1979 with the launch of the Zero 1 system; not DC but 20V AC, a controller that could operate up to 16 locomotives on the same layout, the potential to double-head and bank, the capability to power accessories and much more. 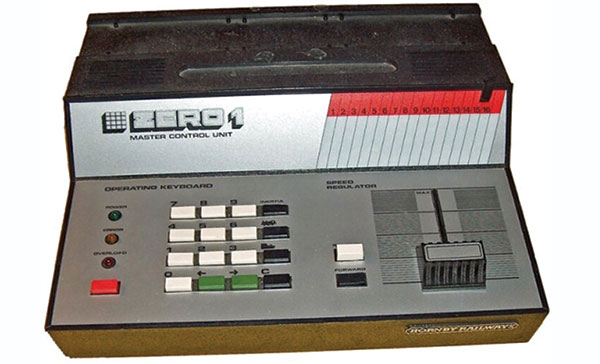 Each locomotive or accessory needed to be fitted with a decoder chip which were comparatively cumbersome and expensive. It impeded adoption by modellers, leading to a quiet demise by the middle of the decade after expensive and lengthy development. Why was it called Zero 1? Binary code, the foundation of all digital coding is based upon two integers, 0 and 1. Maybe it would have fared better if it had placed the trusted Hornby branding on the body or a more knowledgeable and enthusiastic dealer network?

Back in the 1970s after the old Dublo range had been taken over by G&R Wrenn, there were occasional developments such as the Brighton Belle Pullman and catalogues with items that never came to fruition. And so, the shutters came down at Wrenn in 1992. Arguably the range never adapted and developed from its heyday in the 1950s.

A lot of pressure started in the late 1970s, when Airfix and Palitoy’s Mainline brands brought Chinese-designed and manufactured products for UK market. It too suffered in acquisitions and rationalisations and its disruption was felt by Hornby as much as Wrenn. Buyers were wooed with superior detail and decoration and it saw re-births under Replica and Bachmann brands. Hornby accepted that it had to move forward and it took production to China, working with the Sanda Kan factory. Tooling was transferred from the factory at Margate to China and Hornby’s leap forward into the new millennium began.

The year 2000 marked a turning point with newly-designed super-detailed models to the highest standards, and introduced the rebuilt 'Merchant Navy' class, a model which defines what Hornby is today to modellers as much as any other.

As standards were further improved, and the number of new designs multiplied, we also saw a nod to earlier years, when products were simpler and less expensive with the introduction of the Railroad brand. This brought the opportunity to exploit older designs and products acquired after the demise of Lima.