5 ways to improve the reliability of your layout A reliable layout is a fun one to operate. With time on your hands, we've put together a few ideas to help you fettle your model to make it run like a Swiss watch.

1) Check the smoothness of your track

There's not much worse during an operating session than the train running aground on the ballast. Don't put up with it, now is the time to do something to sort things out. Start by running a wagon around the entire layout. Keep your finger inside and shut your eyes. Whenever it runs over some dodgy trackwork, you will feel the wagon bump around.

Once you've found a problem, take a close look. Is one rail lower than the other? If so, cut a matchstick into a wedge shape and try forcing it under the low rail to raise it slightly. If you've already ballasted, don't worry. A damp pad left on the ballast will soften any PVA glue after a few hours and you'll be able to scrape out the ballast or push some more under.

Once happy with the finger test, try running two or three wagons around by giving them a good shove. Any derailment will highlight areas for further attention.

2) Check for ballast in crossings and behind checkrails

Those little stones can get everywhere, and often not always where you want them.

Carefully examine every point frog and inside all the checkrails for ballast. While you are at it, examine the tiebar areas, too as ballast can stop points changing properly. A small screwdriver and old toothbrush are perfect tools for cleaning these areas out. Smoother running and better electrical pickup will be the result of your efforts.

3) Check the movement of your points

While you are looking at the tiebars, do the points change smoothly and, most importantly, do the switch rails go all the way over?

The first culprit is likely to be ballast in the wrong places, but if you have motors fitted, it would pay to drop them on any problematic turnout and see if this makes a difference. If it does, then the motor should be checked when it's not attached to the baseboard.

If that's OK then how it's attached to the layout is the issue. Sometimes it's possible to screw motors down too hard. Peco units benefit from slightly loose screws as the baseplate can distort a fraction should you be too macho with the screwdriver. Back the screws off a bit and see if it makes a difference. 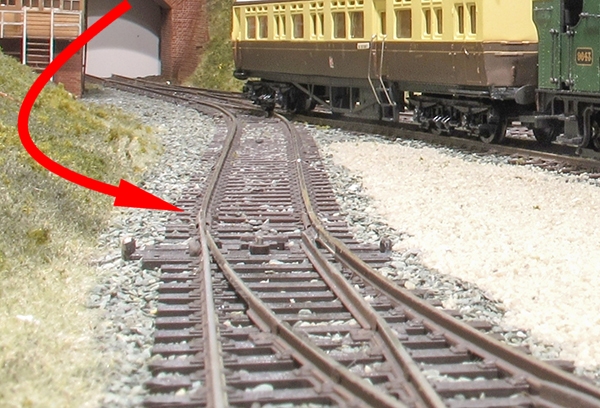 OK, this is more serious. At every track joint, look along the line from as low an angle as you can (a mirror might help) and check for smoothness. It should be almost impossible to see the joint, but if the rail changes direction abruptly then you have a problem, which is going to mean re-laying the section. A lot of work, but ultimately, it will be worth it.

Don't listen to anyone who tells you industrial lines were a mass of dogleg joints. They were, but the locos are a lot heavier, slower and didn't rely on picking up power from the rails.

It's time to crawl under the baseboard and look at the electrics. Tug each and every joint. If the wire comes off, it wasn't attached properly in the first place and that probably means the electricity wasn't flowing reliably. Soldered joints should be strong and shiny. Dull ones may be 'dry', which means they won't conduct properly. Worse, they might conduct intermittently producing faults that are difficult to find. That's why systematically going through each joint is essential.

While you are down there, does the wiring hang messily like an explosion in a spaghetti factory? If the answer is yes, it's time to fix it to the board using cable clips or strong tape. Tidy wiring is less likely to get caught and pulled when you are under the board

All this might seem like a lot of work, but rest assured, everyone from the beginner to the most experienced exhibition layout owner has to do it occasionally. Don't try to ignore problems, they aren't going to fix themselves. A few minutes spent fettling the layout will improve your satisfaction with your model no end. After all, we want to run trains, not poke, prod or rerail them!