How to gild a lilly 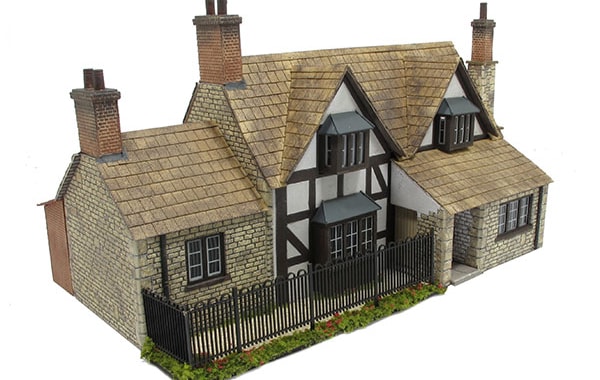 Phil Parker upgrades the latest addition to the Metcalfe Models range with sympathetic custom details, transforming it into a structure worthy of even the finest of layouts.

Among the community of Metcalfe card kit enthusiasts, there was tremendous excitement when the firm released its castle kit last year. But at the same time, another model appeared that almost passed unnoticed. Its (PO267) Town End Cottage is, at first sight, a really attractive building. That's what sold it to me. But, look carefully and the kit breaks much new ground for the manufacturer.

For a start, it's based on a real building. Found on West Street in the Wiltshire village of Lacock, it can be examined on Google Street View, or in real life once we are allowed to travel. Featuring in Cranford, Pride and Prejudice, Downton Abbey and even Harry Potter, the village is well known around the world. As far as I am aware, this is the first prototype model in the Metcalfe range, and the designer has made an excellent job of it.

My plans didn't involve building the model straight from the packet. Excellent instructions are provided, but regular readers will know that I enjoy personalising card kits. I expected that some improvements could easily be made, until I opened the packet.

My plan had been to scribe the stonework, then give it a coat of paint. The traditional card kit corner gaps would be covered with replacement quoin stones. Looking at the pieces, the stonework on this model has been improved over previous kits, and I don't think I can paint it as well as Metcalfe can print it. Plans had to change. I still didn't like the appearance of the corners, but any work would need to be subtle.

After a lot of head-scratching, the solution was found in a tube of Ronseal multi-purpose wood filler. Nearly the same colour as the kit stone, it can be used to fill those gaps nicely. I still felt the walls benefited from scribing – the texture is subtle, but makes a big difference to the finished model.

Up top, I replaced the roof tiles because most models are viewed from above and the lack of texture is very obvious. Again, I struck lucky. Using laser-cut tiles, the colour wasn't far off that found on the prototype. OK, they are twice as deep as required, but don't look out of place and are neater than I can make by hand.

At the back, things are more conventional. While the brick printing is much more realistic than we've seen in the past, the corners still bother me, even if coloured in. Covering with embossed plastic sheet is quick and adds more texture to the surface.

Apart from that, I've toned down some of the white bits for added realism and opened up the front with a non-prototypical metal fence instead of a wall simply because I think it looks nicer. The National Trust, which owns the village, probably wouldn't agree, but this is my model.

None of this is essential. Straight from the box, this is a very attractive building and, in my opinion, the best yet from Metcalfe. Customising it was fun and has taken a good model and lifted it further. I'm really looking forward to the next announcements from this stable.

Regular Metcalfe kit builders won't be surprised to open the packet and find several sheets of differing thickness die-cut card, some printed windows and a small laser-cut sheet of details. What they will spot is more realistic wall finishes than what we've seen in the past. Right from the start, you know this is going to be a good kit. 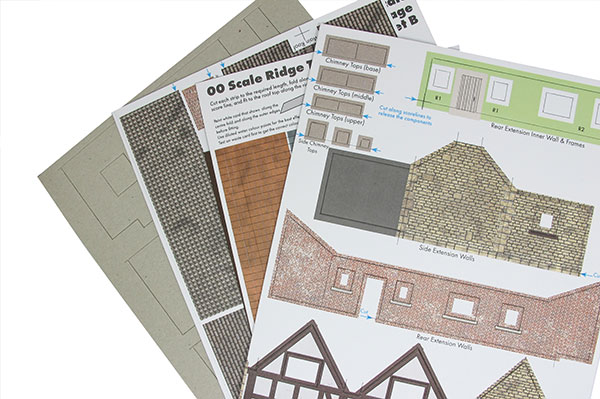 The windows are very white – but this can be toned down by lightly rubbing a pencil over them, then smearing the lead around with a fingertip. The same trick works if you want to completely change the colour, too. 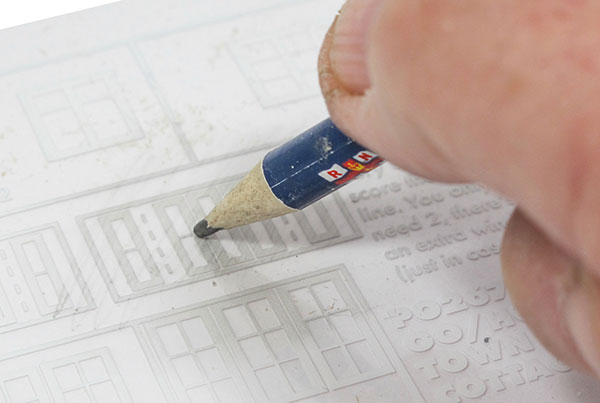 Glazing is fixed to the walls with all-purpose glue, I use UHU Power as it seems to grip better than other brands. Put some weight on these parts as they dry or the card will curl slightly, and when you flatten it, the glue joints break. 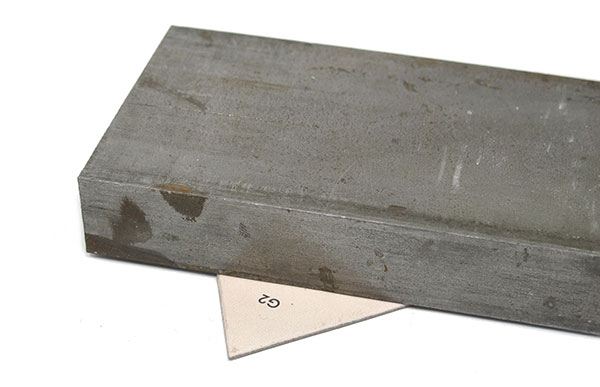 A pile of windows that need to be kept safe until required. Curtains have been cut out from the back page of the instructions. I also scribe and repaint the back door. A Peco track pin will do as the handle later in the build. 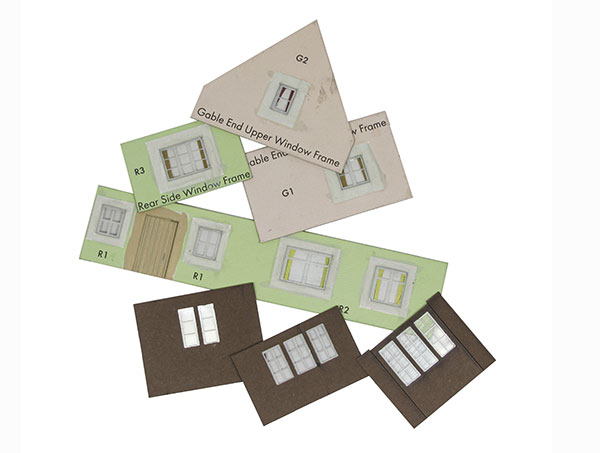 Now for the long job – scribing all the stonework using a blunt tool. Put the horizontal lines in with a rule and the verticals by eye. Absolute precision isn't required because the eye notices the wall has texture, but not individual stones. 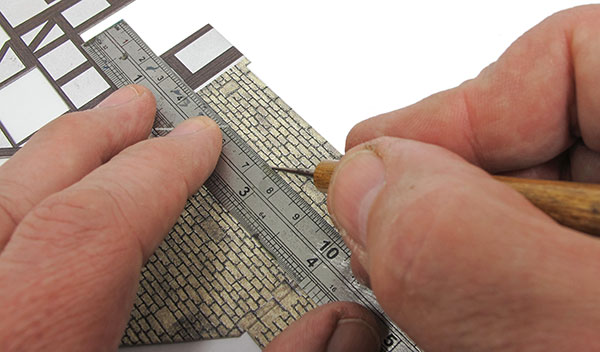 I'm toning down the plaster panels with a wash of Humbrol (147) Pale Grey. Then I paint the woodwork with (173) Track Colour so it will match the laser-cut windows. If you lightly scribe the wood/panel line with a knife, the groove helps keep the colours from spreading where they aren't wanted. 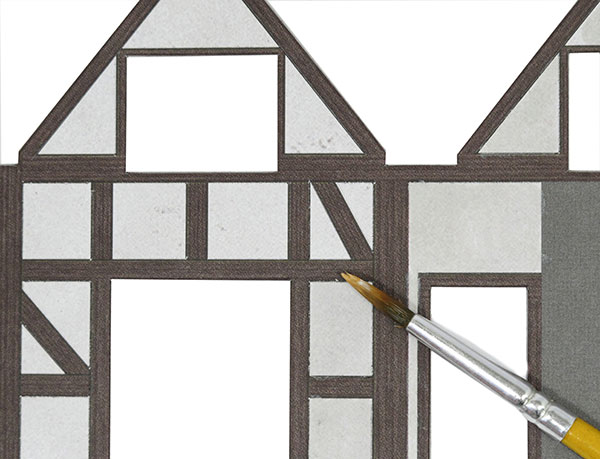 Dormer windows are assembled from laser-cut parts. They slot together and will hold in position long enough to run some glue around the inside of the joint. 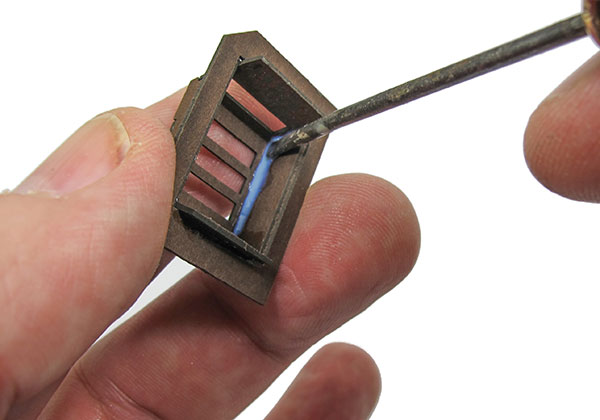 The corners of the window frames are filled and the lot is painted with Track Colour. Glazing is folded, pushed into place, then fixed with UHU applied on the end of a screwdriver from inside. 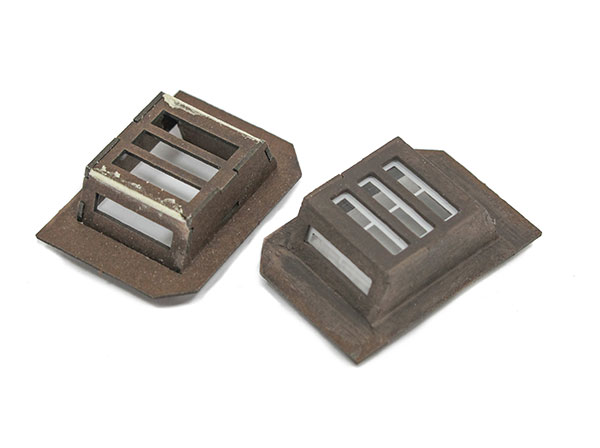 Finally, with all the sub-assemblies complete, construction starts in earnest. Dry-fit everything and make sure it all goes together perfectly before deploying the glue. The assembly sequence is well thought out, but the builder needs to pay attention. 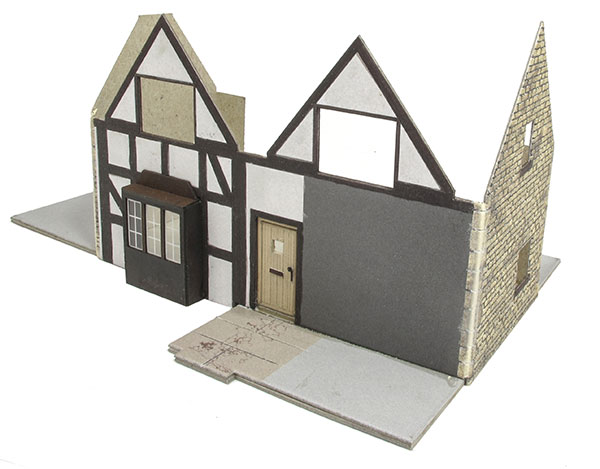 At the back, I'm wrapping the brick with Slater's embossed Plastikard using more UHU. I start with the rear wall, allowing an overhang at each end, then fit the sides. Once dry, everything is trimmed back to the edge of the card, and the windows and door holes are opened out. 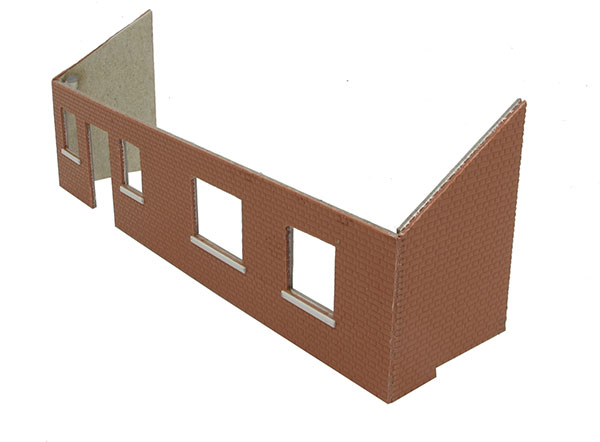 The small side extension is treated in the same way and before it is fitted, I check the end wall doesn't stick out beyond the stone walls, trimming slightly as required. 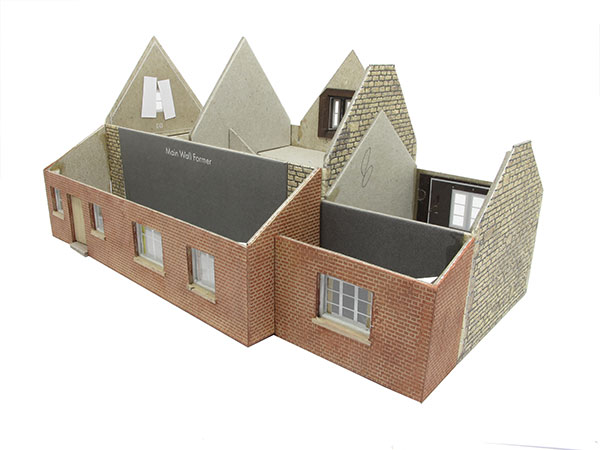 The roof of a model is very obvious at normal viewing angles, so I cover this one with laser-cut slates from ScaleModelScenery. The printed slates provide a handy alignment guide for the covering, being half the depth of their replacements. 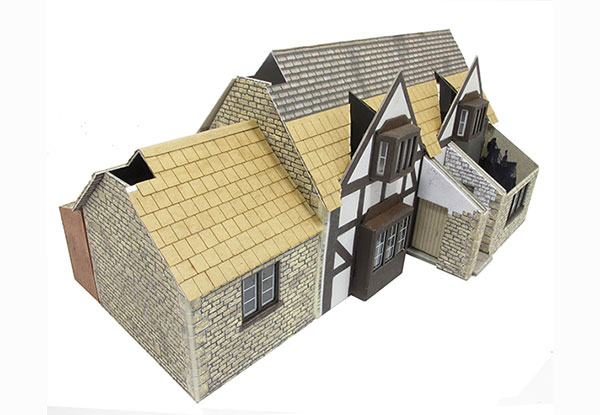 The brick extension should be roofed with pantiles, but as I hadn't got any, I used some Wills (SMP217) Fancy Tiles. Annoyingly, the sheet is a few millimetres short, so I have to join two together with as unobtrusive a joint as I can manage. Good job it's at the back of the building! 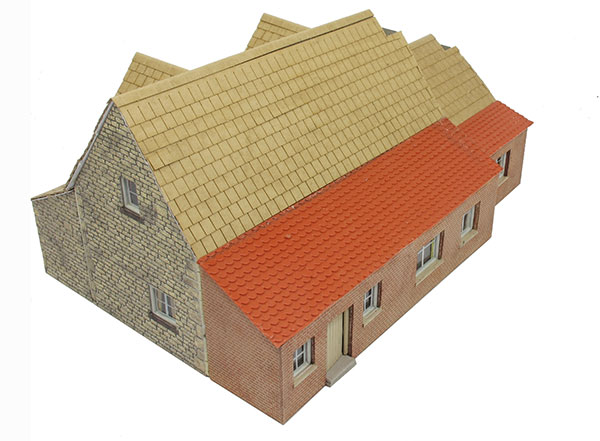 Wrapping the cardboard chimney cores in Plastikard allows me to add layers of brick that are a better match for the prototype than the versions supplied in the kit. Pots come from the Wills Building Details pack as I've never got on with rolling the Metcalfe ones. 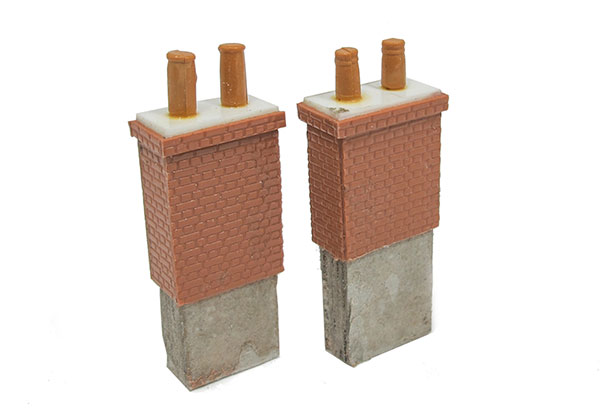 Before painting the roof tiles, I make up a test piece to experiment on. The eventual method used is to dab the tiles with Humbrol (121) Pale Stone, followed by Track colour. Then pat and drag the colours with a stiff brush. 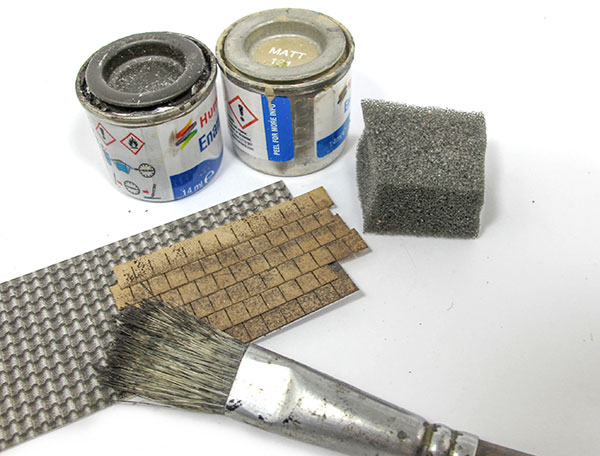 Fitting tiles to the tops of the dormer windows seemed very fiddly, so I treated them to some lead instead. The card parts are painted, fitted and short lengths of Microstrip are added to the corners. This sort of detail wasn't uncommon on real buildings and is easy to model. 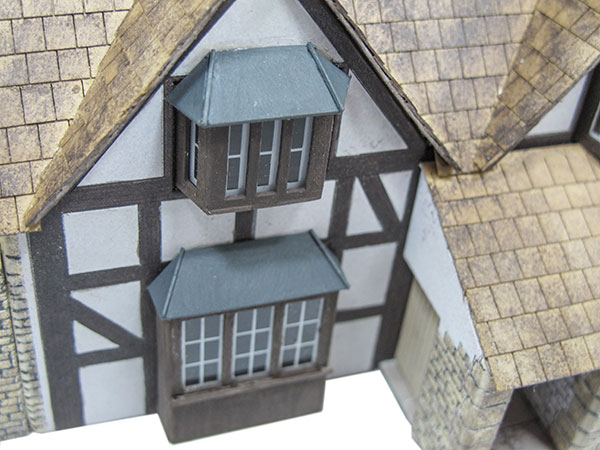 While adding leadwork, some 3mm wide strips of cigarette paper are stuck around the base of the chimneys to represent flashing, and cover up any gaps. 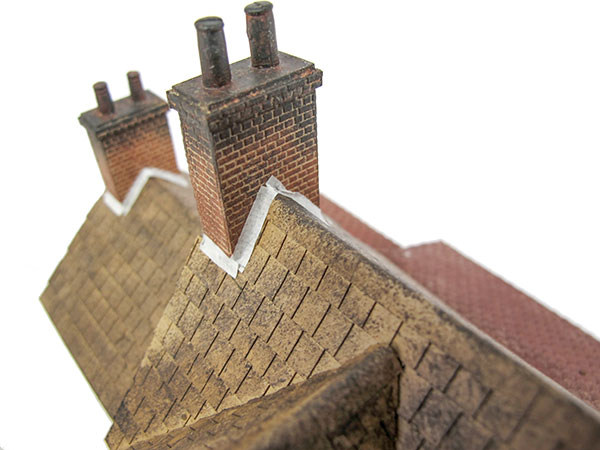 I felt the prototypical stone wall hid the front of the building, so cut a piece of card that fitted along the front and added ScaleModelScenery school-type fencing and a bit of scatter for a suitably pretty garden. Job complete! 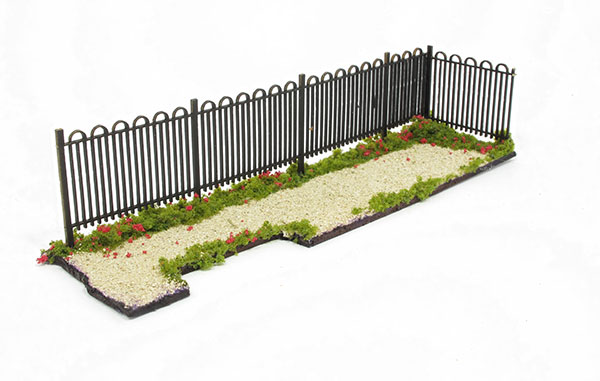 Apply natural colour wood filler to the gap down the corner, being careful to push it in fully. Clean up excess while still wet using a small knife. 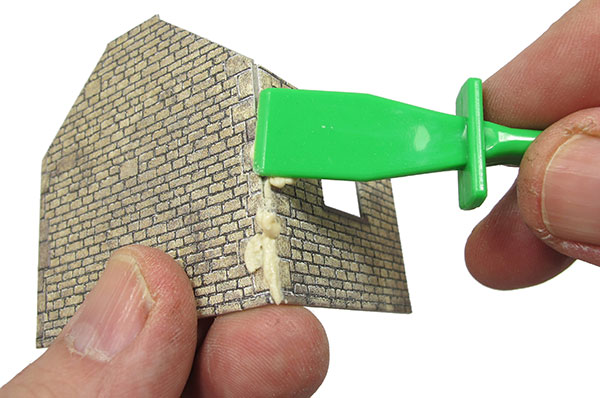 Smooth the filler with your finger. If this is less than clean, it will add a bit of colour to match the printed stonework. 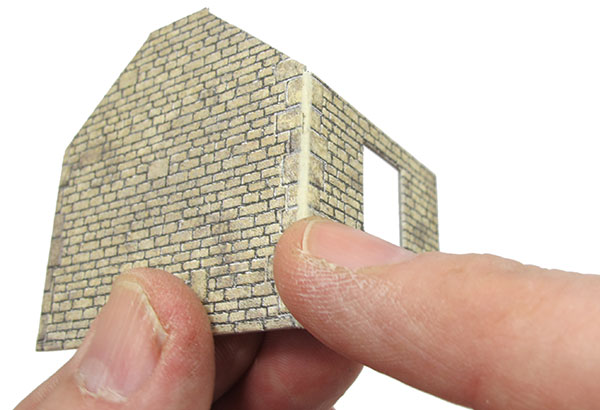 Once the filler has hardened, cut the courses between the stones with a modelling saw. A few gentle strokes will be plenty – we want to mark the filler, not cut into the wall. 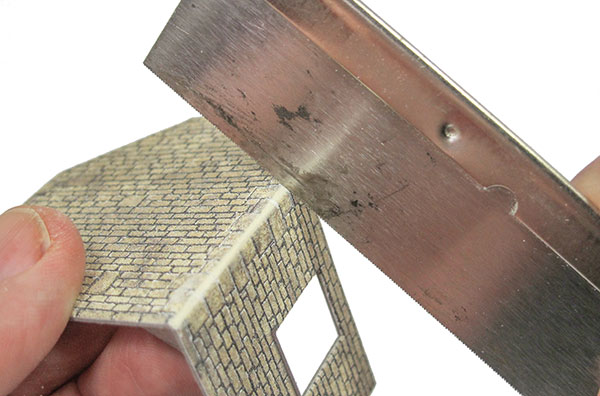 Rub your finger over the cuts to smooth them. Again, a grubby digit will help them stand out but if that doesn't work, a fine pencil line will work. 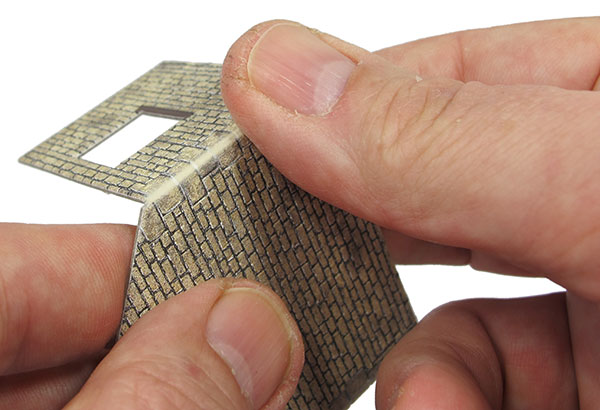