What is flat bottom rail? Flat bottom rail is the most common type of rail used worldwide. It is distinguishable from other rail types by its thin, flat bottom. Today, lengths are often welded together, particularly on high-speed lines, rather than bolted together.

Flat bottom rail is now the industry standard profile for railway lines around the world, excluding tram lines. Its name is derived from its wide foot, which gives it greater stability versus other types, such as bull head rail.  It can be attached to wooden sleepers using screw spikes, or dog spikes, which are driven into the wood either side of the rail 'toe'. Alternatively – and more common today – the rail is supported on railpads and fixed using sprung clips to a cast support. 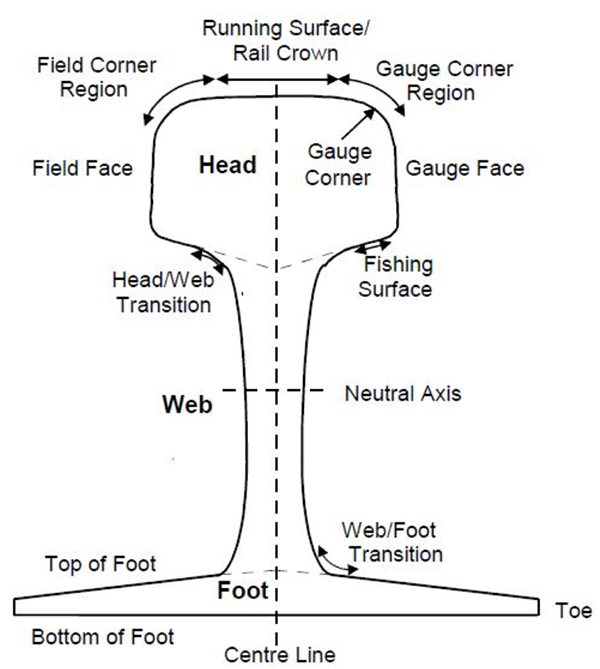 A cross-section of flat bottom rail with common terminology.

Flat bottom rail evolved from previous rail types, the earliest of which were made in short sections from cast iron. The shape of flat bottom rail was pioneered in the late-1800s and saw widespread use in North America. Though its shape has changed little since its introduction, the size and weight of the rail can vary greatly.

Rail is defined by its section weight, measured in kg/m or lb/yd. For example, a piece of 60kg/m rail will weigh 60kg for every metre of its length. The rail height (measured between the bottom of the foot and rail crown), the web thickness, the foot width and rail crown width are all variables, which depend on the rail specifications for a given line. Rail specifications are influenced by the weight and speed of traffic which the line is likely to see. Many heavy freight routes will utilise rail with a section weight of 55kg and above, and in mainland Europe, 60kg/m and above is commonplace, particularly on high-speed lines. In the earlier days of flat-bottom rail use, when line speeds were slower and traffic less dense, rail section weight requirements were less onerous, and section weights below 46kg/m were common place.

When modelling flat bottom rail on a layout, many modellers adopt a 'one size fits all' approach, where a generic flat bottom rail profile also known as 'track code' in modelling parlance is used, regardless of the era or type of line being modelled. This is more for ease of use and availability from manufacturers, where the marginal change of track code, particularly in smaller scales is negligeable.