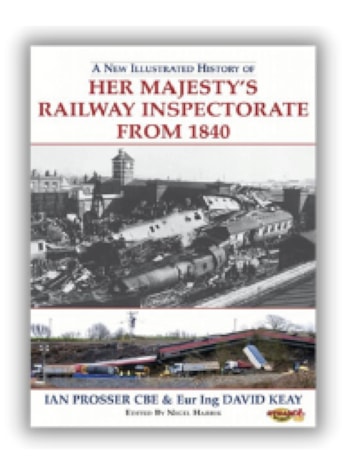 Authored by current CHIEF INSPECTOR OF RAILWAYS IAN PROSSER CBE and his retired Deputy, Eur Ing DAVID KEAY, this 184pp large format quality hardback is printed on luxurious heavyweight art paper and is illustrated using more than 280 photographs, trackplans, tables and graphics. Illustrations are monochrome up to page 112 and colour from page 113. The 11-chapter book has been edited by Steam World Consultant Editor Nigel Harris.

Prosser & Keay tell HMRI’s important and exciting story – warts and all – from its establishment just ten years after the opening of the Liverpool &amp; Manchester Railway, in 1830, to the end of the second decade of the 21 st century. Accidents large and small, infamous and less well known, chronicle and explain the steady progression in railway safety, pressed relentlessly for 180 years by the RI/HMRI. For 166 years from 1840, RI/HMRI Inspectors were drawn from the ranks of the Royal Engineers and a foreword has been written by Major John Poyntz, who retired in 2006 as the last RE Railway Inspector.

This superb book tells the story from the RI’s earliest days, through to the well-known rail tragedies of the privatisation era, including Ladbroke Grove, Hatfield, Potters Bar and Grayrigg, which are profusely illustrated. HMRI’s own troubled times in the 1990s and early 2000s, and the story of its controversial transfer from the Health & Safety Executive to the Office of Rail Regulation, in 2006, are covered candidly by the authors.

Today, Britain’s railway is the safest in Europe – this book tells the story of the RI/HMRI’s contribution to this noteworthy achievement.