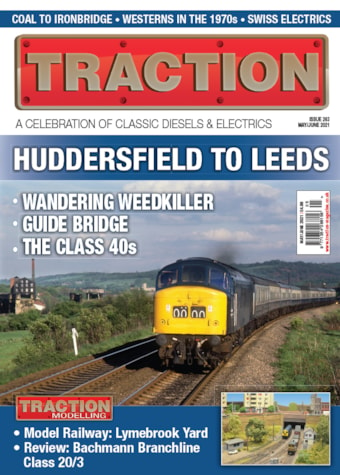 In this issue of Traction we look at a type of traffic on Britain’s railways that has almost disappeared, coal to power stations. We focus on coal trains to Ironbridge power station in Shropshire, in the years until the mid 1980s.

In ‘The Wandering Weedkiller’ we recall a day chasing and photographing a Class 20 hauled weedkiller train around Kent in spring 1989. Class 40s had a great following among enthusiasts in their later years during the 1980s and many set out to photograph them; here we present just a few of images of the class in their final years.
The Swiss railways have always been at the forefront of electric locomotive developments and we examine the development of the post war electrics starting with the 1944 built BLS Bo-Bos from which all modern electric locomotives have been derived.
We conclude our multi-part photo study of the Manchester to Leeds Trans Pennine main line with the section between Huddersfield and Leeds.
We go on a holiday to Scotland where the writer combined visits to depots in Motherwell and Glasgow with family trips around Fort William and Oban.
The once busy Manchester junction of Guide Bridge is shown during the late 1970s when the Woodhead line was still busy.
Chasing after the ‘Westerns’ in the 1970s became a passion for many enthusiasts as they attempted to see as many of the class as they could before withdrawal. This engaging story tells of the successes and disappointments.