It's the second semi-final and we're off to the cinema for some monster action.

It's the second semi-final and the opening puns aren't getting any better. I'm sure someone is writing them down for a book in time for Christmas. Please don't buy me a copy.

The family team from Heat 3 aren't here for a picnic, they are here to WIN. Their plan is to recreate the wizarding world of Harry Potter, complete with broomsticks, giant spiders and enchanted cars. Since I've not read the books and when I saw the first film, I was in the projection booth, this will be new to me.

Wildcard entry Muddle and Go Nowhere are fans of James Bond movies, always my choice for background entertainment while sticking kits together on a wet Sunday afternoon. There's plenty of train action to recreate but will they choose the green locomotive seen in From Russia with Love? Apparently, they are stepping up to the plate. I hope it's got cake on it.

Heat 4's winners will pay homage to Jurassic Park with a dinosaur-infested creation. Yes – the dinosaurs are back! Good film too, although a bit light on railway content as I recall. Last time there were problems with some animations. And a Crosti 9f with smoke coming out of the wrong chimney.

The pertinent word here is 'films'. One team wanted to base their model on a classic TV show (I'll have a P Class please Bob) and the producers said no.

Tim tries to suggest some naked model making. Aside from the health and safety issues this would create, no one wants to see this. No one.

Steve, who seems to transform from stern to enthusiastic when the camera crew take him outside, wants cinematic creations, but NOT at the cost of top quality model making. Kathy's a regular moviegoer and doesn't want to be short-changed (don't buy the popcorn then) and wants to feel she is actually there. It's not clear if “there” refers to in the film or sat in the local multiplex.

The Railmen of Kent managed the last round without a family argument and are now offering 'Harry Spotter and the Anorak Prince', possibly the funniest title we've seen this series and streets ahead of Tim's jokes.

We can look forward to the Glenfinnan viaduct, Hogwarts Castle (I thought it was a school, but then I've not read the books), a flying Ford Anglia, a game of Quidditch and rotating Bonnie Prince Charlie statue. Magic merchandise will be moved across the layout for the operational challenge. Kathy looks forward to it casting a spell.

Team Muddle's layout 'James Bond' will feature trains from Octopussy and Goldeneye, a car running along the tracks and a bus cornering out of control through a market. Operationally, Bond will be on set jumping on and off a moving train. Could it be amazing or catastrophic? Steve hopes the latter.

It's 'Jurrasic Park' for the rivet counters. Their operational challenge involves moving a cow to be dinner for a T-Rex. A keeper will be eaten and so will a cow, we'll have animated tour vehicles and an electrocuted Timmy.

Everyone has decided to add to the pre-prepared trackplan. The Railmen are having trouble with fishplates, they know the judges expect perfect operation. After the adverts though, a Class 37 putters around nicely, until a gap in the track rears its ugly head.

In the Art Room, Railmen John is building a fantastic giant spider called Aragog. Sadly, he suffers from Arachnophobia, making him the obvious choice to build a model of a bug who regards all humans as prey. Did you know Aragog is an Acromantula? Or that his venom is useful in potions? Or that the Internet is very good for looking things up when you've not read the books?

The Rivets are plastering the track to turn it into a road for a radio control Landrover. A successful test run earns Gwion a giant jelly worm. Yum.

Team Muddle has acquired the biggest bottle of Deluxe Materials Speed Bond glue I've ever seen. While I suffer adhesive envy, they run a short train.

Steve suggests the Muddle layout demonstrates true “Railway modeller expertise” (Nice product placement!) as it's all based on real scenes filmed on the Nene Valley Railway and awards a 4 for creativity. Kathy also offers 4 – but with a proviso, this might be revisited later.

Dino-tastic Rivets please Kathy because all her favourite Jurrasic Park scenes are included, so it's a 4 from her. Steve agrees and it's another 4.

Steve likes the proper track, proper loops and proper viaducts on the Railmen's 'Harry Spotter' layout. Another 4 from him. Kathy likes the sinuous flowing curves, flying broomsticks and car. Yet another 4.

We finish with Phil Muddle explaining his fruit-based rolling stock retaining system, but is trumped by a radio control T-Rex chomping on Maltesers, or at least trying to. I'm pretty sure there are people in the Natural History Museum shouting at the telly that confectionery didn't form any part of dinosaurs diets. Pedants. You won't see any of that from our hobby.

In the Art Room, Railmen Nick, who last time wowed us with models of St Pancras and Kings Cross, is busy turning an assortment of tubes and plaster bandage into Hogwarts castle. Looking at the amount of material used, I worry how many toilet rolls at Fawley gave up their innards for this.

Tim's raided baldy James's bathroom cabinets for a head massager, Miracle Grow plant food and some eyelash curlers. He makes the point that all of the bits need to be on the model.

For the Railmen, John has produced the first animated SBC by using the wires from the head massager to hold up the Quidditch players. Eyelash curlers hold up the Golden Snitch and the bottle of Grow has been emptied and built into the Bonnie Prince Charlie support. Kathy is impressed, but points out that all these were going to be built anyway, he just took the opportunity to use these materials instead of the planned ones.

Muddle Chris built an industrial chimney using the bottle and part of the massager. He admits it's not his best and Tim and Kathy agree so we move on quickly. More bits from the massager become lampstands and the eyebrow curler a rig on a chase camera car. Who knew they looked the same?

Riveting Charlie has used some wire bits from the massager to make weather control apparatus. The fertilizer has been watered down and turned into a bottle of amber containing a mini creature, which lights up. Finally, the eyelash device gives up its hinge for a working, nodding triceratops. It's the win for Charlie and garners him 2 points and a jelly worm. 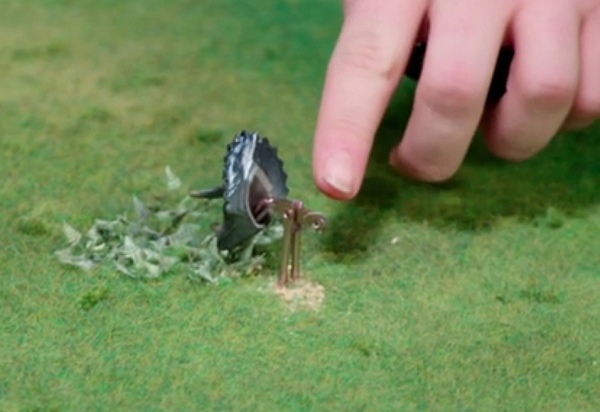 The Railmen now have trains running. The Rivets have tested their electric fence. Kathy starts rattling on about baking cake with the Muddles and their less than perfect road. Have I tuned in to the wrong show?

Build quality isn't good for the Muddles according to Steve. He likes the stuff coming of the Design Room but not the modelling on the layout. It's a 3 unless a miracle occurs. Kathy is also worried and also awards 3.

Kathy likes the levels on the Railmen layout but the grass is too clean for Scotland. 4 from both judges as Steve loves the viaduct.

Steve is looking forward to the Rivetters animations. After wallowing in nostalgia for using bits of string, he awards a 4, as does Kathy.

Railmen Fred is having issues with a spinning wagon load but the Muddles 'James Bond' leaps are working well. Over in 'Jurrasic Park', a helicopter dangles from a long pole and inexplicably, Steven has stolen the Man from Delmote's hat.

Panic time – mopping up the Muddle road, trouble with Bonnie Prince Charlie's spigot and some dubious backscene modification. Will two sheets of acetate solve the Railmans operation problems? Why has a radio-controlled helicopter just crashed? How come the Rivet team have gone all healthy eating grapes instead of jelly worms with their tea?

Railmen of Kent – 'Harry Spotter and The Anorak Prince'

The centrepiece is a Quidditch game, in which the newly expanded Hogwarts rail fleet passes. It seems that the kids are being transported in suitably liveried horse boxes. To be fair, the school buses when I was a kid weren't the most luxurious either... 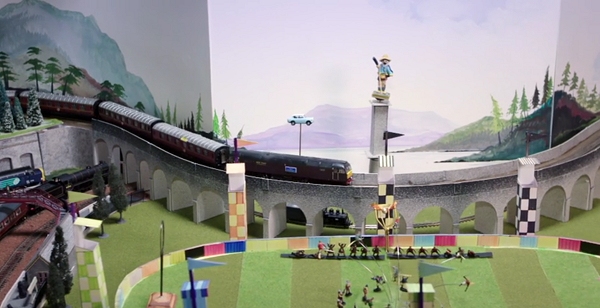 A train runs along the Glenfinnan viaduct, followed by a flying Ford Anglia, all overseen with spinning Prince Charlie.

The operational challenge has been tweaked and now a crate is lifted from a platform by a gantry crane on to a Lowmac. It's delivered to another plaform, where' after a little jiggling, it's hooked by another crane and transfers to a new platform perfectly. Pay attention and you realise that this happened at least three times to provide the different camera angles – clever stuff that could work just as well on a scale model.

The Goldeneye armoured train charges into a Russian tank, blowing it apart. The film crew has been setting up in a detailed town centre set model. Into this comes Bond on a bus that careers through the traffic, slaloms past the cars until he ploughs through a market stall, into an E-type Jaguar and over a cliff edge. There goes his no claims bonus.

Undeterred, Bond is now in a Mercedes, running on the track as seen in Octopussy, which goes well (apart from some finger poking) until a change of points sees him plough into another train where the car explodes. 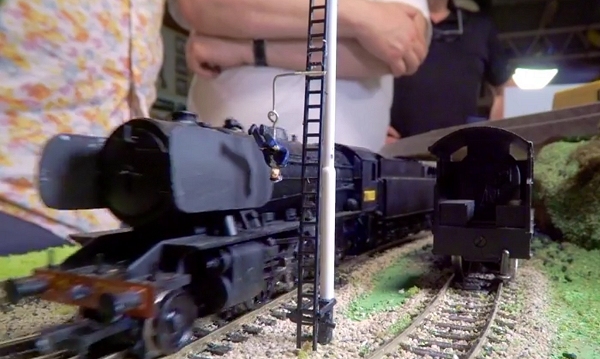 Finally, he dangles from a signal gantry and is picked up by the animal coach (a repainted Hornby TPO coach) at the end of a train. At the other side of the layout, he's hurled out again into the depths of a swimming pool.

Finally, the radio control helicopter takes the actors away without decapitating the audience.

Stern Steve is gifted John Hammond's hat (it wasn't the Man from Delmonte's after all) and Kathy a baby dinosaur in amber. Tim and James get Jurassic Park baseball caps and because Tim is 45, so puts it on backwards because he thinks it looks cool.

A raptor is being transferred to the park but has escaped and is chewing on a park ranger. Odd that Tim and James had just become honoury park rangers – a subtle message to them perhaps?

In comes a helicopter dangling from a pole (Tim gets sarcastic, but it's simple and effective). They land and are taken on a tour in the Landrover running on rails past a nodding Triceratops. A cow is lowered into the raptor pit and emerges as a collection of bones. I've watched this three times and can't work out how it's done.

More cow dangling action for the operation challenge. The beast is winched onto the wagon, which travels around the layout, but not to the pit! Instead, it ends up by the T-Rex, which snatches the cow up in its jaws. Unhappy with dinner (what did he want? Tofu?) T-Rex trashes the wagon, causing all the power to go out. Tim resets the breakers one by one and when he switches on the perimeter fence, electrocutes someone climbing over, flinging their body into the field.

Who's Counting Rivets – Hollywood style effects and all the major scenes from the film to please Kathy.

Railmen of Kent – Lovely Highland landscape and two trains running to please Steve. He does love a bit of traditional modelling. 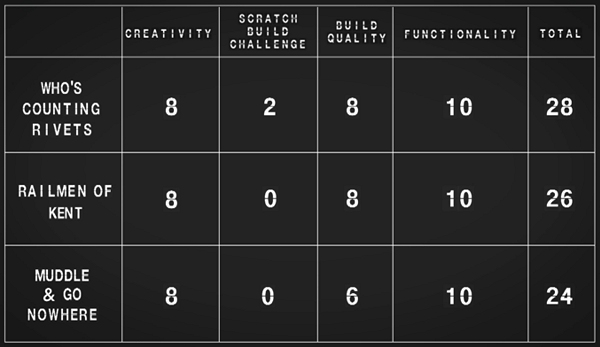 A very tight competition with all teams within two points of each other. Some really cracking animations again, these are really proving to be vital to progress in the competition and while some modellers will decry this, there are others looking at them and wondering how they could pinch ideas for their layouts.

It's the grand final next week and we are promised that things will get bigger and better. I can't wait.