Time to get your library card out, the contestants are building models based on classic books.

Hailing from Stern Steve's home town, this team met up in a MATES group - Man And Tools Enjoy Sheds (the wooden sort, not a Class 66 diesel, although they might like those too) group, where they work on various practical and artistic projects.

You might recognise a couple of faces in this team. Jenny and Simon cut their telly railway modelling teeth on Channel 4's The Biggest Little Railway in the World. Presumably, they were tempted back with the promise that filming wouldn't involve lugging all the materials around a Scottish hillside and the midge count would be low. Stefan is also a star in his native Sweden as the publisher of the countries largest model railway magazine, a nordic Stern Steve perhaps?

Formed especially for this challenge, there is a mix of skills and enthusiasm from the team, whose ages range from 17 to 54. With an engineer, artist and aircraft enthusiast among them, will their project be plane sailing? The 'One Direction' of railway modelling apparently.

It's puntastic time again - A Tale of Two Intercities? And how did "Lord of the Flange" get past before the watershed - or is it just my mind?

Team Pheonix are basing their model on Agatha Christie novels. Steve explains, with great enthusiasm, that it means trains and murders. He's taking the sinister bit too seriously I think.

Sci-fi fans, the Rail Riders are building the sequel to HG Wells 'The War of the Worlds' when the Martians come back (anyone remember the very end of the Jeff Wayne album?). We're going to get a big UFO mothership, the warship Thunderchild (strictly speaking, this was destroyed in the book, maybe they built a replacement) and two tripods. Tim accuses the team captain of being an alien, gets worried when he doesn't deny it and makes a quick exit before being probed.

Scarborough Flyers are in the desert with Lawrence of Arabia promising disappearing passengers, a mirage and a massive train crash. Crashes and a sphinx? Didn't we see that last week? Controversially, they seem to have brought their entire complex trackbed as a pre-build. Is this allowed?

Pheonix are keeping their track plan simple with a couple of circuits. They know that the train must run.

Scarborough's plan is much more complex with multiple levels, but they brought it with them mostly assembled - although Steve immediately starts spotting gaps that could lead to disaster.

A few hours in and James has his enjoyment of 50 Shades of Grey ruined by Tim, who gives away the ending so he tosses it aside. Those who've read it tell me that's a lucky escape...

Jenny is looking for kinks, she's seen this series before but is appropriating Steve's catchphrase (he's very proud of it). A good move? As it is, the Rail Riders are the first with trains moving.

Wiring is underway on Scarborough's layout, but ingeniously on top of the baseboard, buried in the foam scenery. As the captain says, he's too old and fat to be crawling around on the floor poking with the underside. 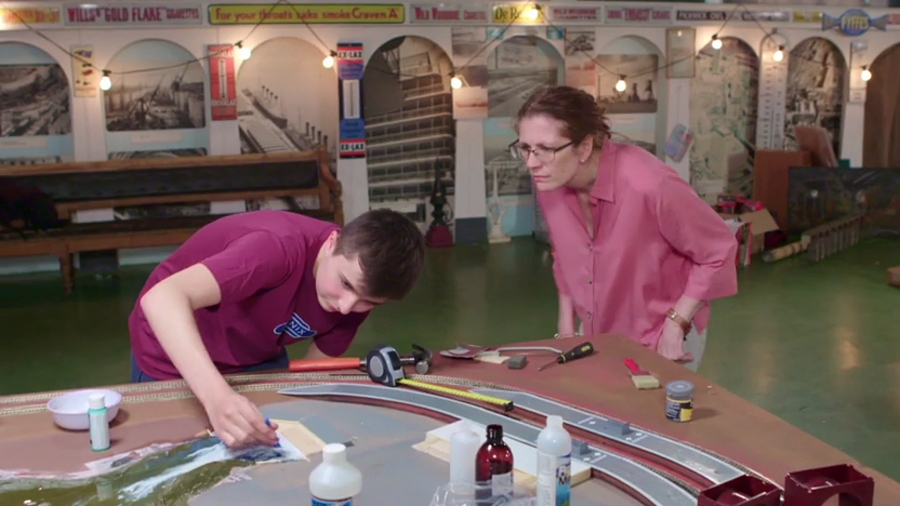 It's all going wrong in the Nile on Pheonix's layout. Despite blasting the "water" with a heat gun, it's setting with a milky finish. Kathy takes a look at the materials and diagnoses that the aqua colour is water-based, and the resin is a chemical that will seal it and prevent drying. She instructs them to scrape it all off and start again. Captain Ray isn't happy as it's putting them well behind.

Rail Rider Paul has constructed a magnificent viaduct from the Wills plastic kit. A bit of an artist, he's weathered it with pastels, paint and even varnish. Tim's impressed with the result of his 30-40 hours work. Not only this, HMS Thunderchild sits on an amazing concoction of Modge Podge, shower curtains and silicone, making it look like it's blasting through the waves.

Scarborough have built their track, but more excitingly, there is a working camel charge. For fine-scale fans, you could build this with road vehicles for a UK layout, just like Dave Rowe did back in the 1980s. They have an amphitheatre that is the makers first model and features railway workers converted into TE Lawrence and some lovely tents made from foam formers and PVA glue-filled cloth - paper wouldn't hang properly apparently. Kathy is impressed.

By the end of the day, Steve is looking forward to Scarborough's mirage machine and awards them 4 for creativity. Kathy agrees and also give them a 4.

Rail Rider are looking good and sci-fi fan Kathy hands out a 4. Steve thinks it's sci-fi, but not as we know it (is he writing his own puns?) and it's a 4 from him.

Finally, Phoenix's unusual design interests Steve with a 4, but Kathy isn't so sure about it so they only get a 3.

Rail Rider Les thinks they might be ahead, but is this pride before a fall? 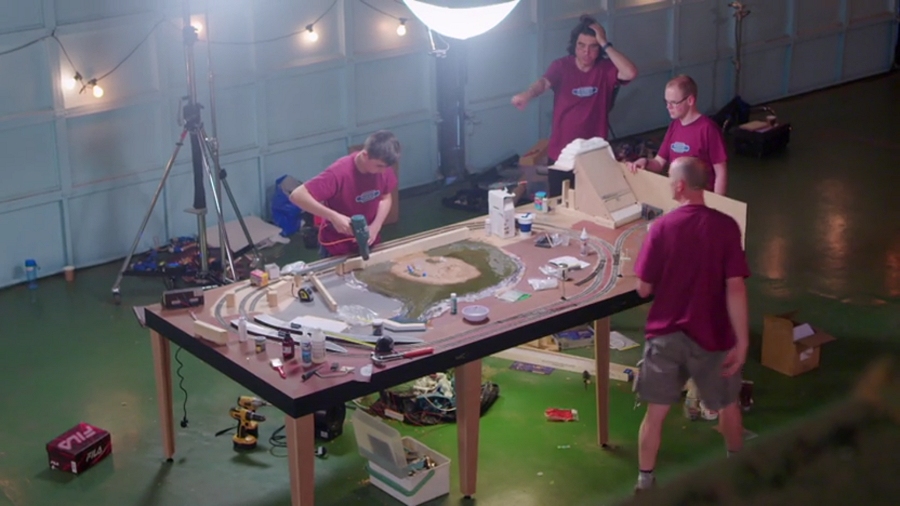 Over at Scarborough, Steve is still finding gaps in the track. His verdict? "It's a right pudding mate." What sort of pudding isn't explained, but I don't think it's a nice one. Through gritted teeth, Chris claims it's helpful advice.

Tim's been in the shed and dug out a tiny watering can, metal mesh bird feeder, ping pong bat and ball.

Scarborough cut the ping pong balls in half and link them to the bottom of the feeder, claiming it to be a condensing unit in the desert. Tim's offended by this and there is a very pointed silence. The rest of the feeders end up as Prisoner of War cages sat on the bats. "Are you happy with the finish?", Tim asks and, after an awkward pause, declares it "pretty creative" in a way that suggests he considers it anything but.

Pheonix turn their can into a water tank, which looks like a de-spouted watering can. The bat covers and feeders become a really effective lighthouse and the ping pong ball an igloo, which sadly is buried in the snow.

Rail Riders turn the watering can into a gasometer, even though it seems to resist paint. It sits on the covering from the ping pong bat. The spout becomes a chimney. The bird feeder is turned into a security fence and the balls are cut in half and fitted to the bottom of the tripods as somewhere for the Martians to store their victims. Kathy is impressed and they win the 2 points.

Back in the workshop, the Nile is dry and Nathan is a very relieved modeller. It's also got some impressive tents springing up on the banks.

In the art room, Steve gets all nostalgic over a plastic model of a DC3 Dakota aeroplane. There are some similar models in the early days of his modelling life, although they won't have been as impressive as this model with it's working, motorised propellers and illuminating landing lights.

Jenny is working fast again with an instant knoll. She's eschewed static grass for a pre-flocked sheet heated with a hot air gun to make it flexible and then draped over the foam hillside. Add some seafoam trees and it's very effect - and quick.

At the end of the day, the judge's award marks for build quality. Pheonix get 3 from both judges. Rail Riders land a 4 and 3 - Steve isn't so keen on the gaps at the end of the track on the viaduct, describing them as 'icky bits'. Scarborough win 3 from Kathy, who says lots of things are being thrown at the layout, but not all of them are landing. Steve has found more track gaps (it's his thing this week) and so only a 2 for them despite getting all nostalgic about building tunnels from his dad's books as a child.

It's time for the animations to go wrong as the pressure cranks up. Under the Rail Riders, Simon is burning his fingers on a smoke machine nozzle - hot enough to melt gaffer tape apparently. The tripod war machines aren't behaving either, a small servo should provide animation but it's not working.

Under the Pheonix layout, a slipping shaft is stopping the boat sailing around the model and there's some scrabbling around to sort it.

The Scarborough Flyers are standing around drinking tea.

The troop train heads up the hill and my first thought is, "Why is there a Train-Tech LCD message board in the middle of the desert?"

As it passes the 'mirage', a screen mounted behind the model, visions of the judges and presenters looking gloomily down, fade away as if by magic. A giant Stern Steve appearing in the sky would certainly scare people in real life.

Disappearing passengers are a major animation - the train pulls into the station and behind it, the platform top should flip over so it appears the passengers have embarked. It works on the second go, but only after the locomotive has split the points causing Steve and Kathy to look solely at their clipboards in the way your driving examiner does just before you fail the test.

Once out of the station, the train picks up a troop car which is then (deliberately) derailed in an explosion.

We are promised lots of death and murders and our first story is the 4:50 from Paddington, which includes the best use of a Hornby TPO car ever - throwing a dead body out on the curve.

The Nile cruiser is a bit sticky, although someone suggests it's on a choppy sea. More successful is the flying Dakota, but the pièce de résistance is the avalanche burying a speeding train.

Rail Riders - War of the Worlds

Brian says they have kept things simple to make them reliable. Then everyone gets distracted by a cow with a Donald Trump-esque haircut, a tribute to the film Mars Attacks. 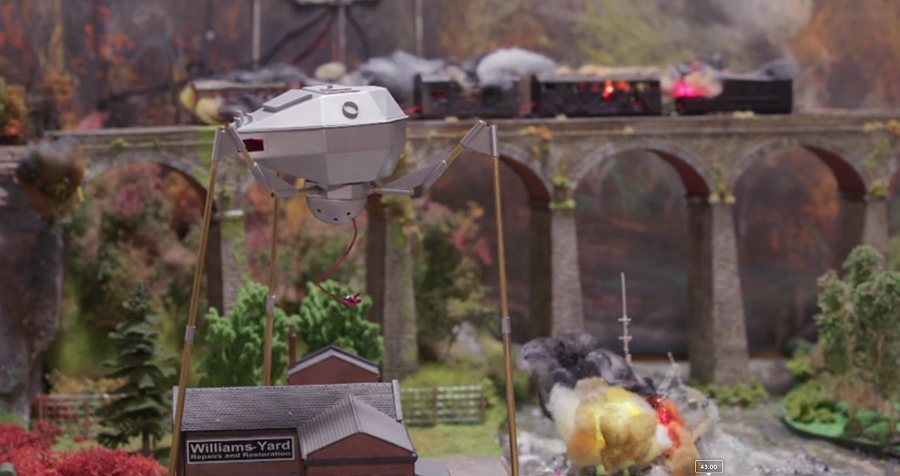 Martians have attacked a Yorkshire town and the population are trying to escape. I'm not sure I'd pick a Pacer for this, they are pretty rattly at the best of times, never mind during an alien invasion. Perhaps they think Martians won't be bothered by this archaic technology? Some of the population don't make it and are taken up into the tripods. Steve thinks eating a Yorkshireman will be hard work, HG Wells didn't consider that!

There isn't much animation, but we have both houses and trains on fire with smoke and flashing lights. More lights arrive in the form of a mother ship blasting lasers, which the revived smoke machine makes really visible and exciting - at least for Tim.

Rail Riders - Everything worked, the layout looked fantastic. Steve thought the effect had been lifted from a disco but reliability won the day. 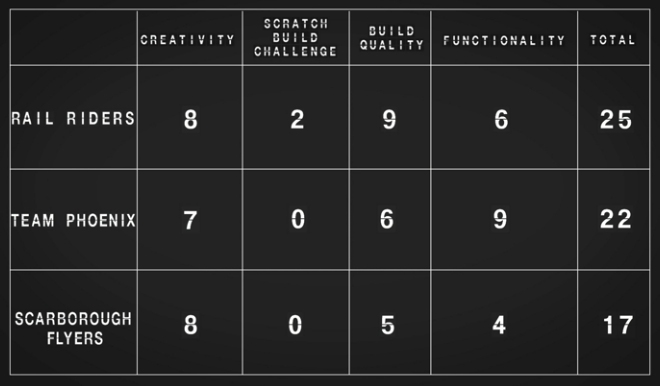 Me? I'm off to load my Hornby TPO with bodies...