The Great Model Railway Challenge - Behind the scenes filming When you watch the GMRC, you'll have noticed the little inserts showing trains running either side of the adverts. Where did they come from? BRM takes you behind the scenes.

All the short videos were shot earlier this year on layouts belonging to the Leamington & Warwick Model Railway Society by TV production company PocketRocket.

Over two days, the team used a combination of tiny cameras and special rigs to hold them in place over the layout to capture footage of the societies OO, P4 and O gauge layouts.

In post-production, the backgrounds were replaced with skies and extra scenery. Steam and smoke effects were added to the locomotives along with the appropriate sounds. Club members who saw the finished footage found it difficult to identify their own models! 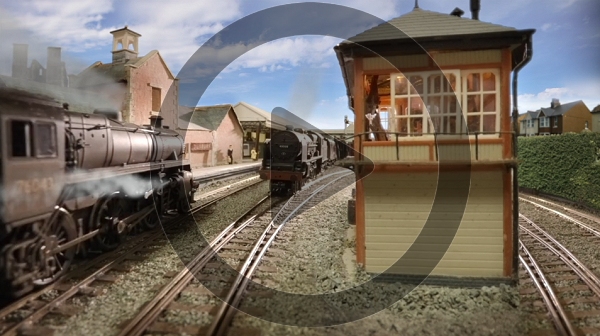 The full set of videos can be watched here.

Pocket Rocket knew of the Leamington club because five years ago they had filmed a short feature on the club's P4 layout "Clarendon". As well as being an interesting piece to watch, it shows some of the early techniques now perfected for the GMRC videos.

The L&WMRS O gauge layout "Kimble" seen in the GMRC videos will be featured in the December 2019 issue of BRM.

You can find out more about the L&WMRS from their website.