Howard Smith finds much to like about these OO gauge pre-grouping models, produced in an attractive number of liveries.

A ‘road van’ is the terminology used to describe a brake van, capable of transporting goods. The London & South Western Railway’s (LSWR) 10T Road Vans were its most numerous, almost 500 being constructed from its introduction in 1884, until 1905, to Diagram 1541.

Of typical sturdy hardwood construction over a steel chassis with a 10ft 6in wheelbase, the vehicles featured hinged side doors to access goods from platform level. Their design varied little over the years, key detail changes being round or ribbed shanked buffers, and straight or cranked step board supports. 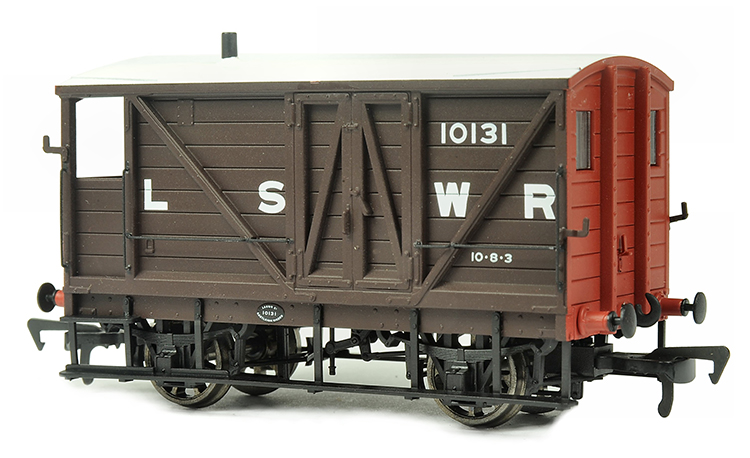 Kernow Model Rail Centre has laboriously researched the prototypes and introduced its own branded models of these vehicles, its tooling catering for the aforementioned variations. Impressively for a first release of the models, 10 variants are being produced, covering LSWR livery with red ends, SR pre- and post-1936 brown liveries and BR grey. Versions suitable for mainland and the Isle of Wight are available, making this model launch comprehensive.

Laser-scanned from survivor, 56046, on the Isle of Wight Steam Railway, the model unsurprisingly scales out very well. The injection-moulded plastic model is light, but a small rectangular cast weight screwed to the inside of the body helps increase its weight to 46g – sufficient to keep the model sturdy when running, but not detrimental to performance if hauled in a longer rake of wagons by a smaller locomotive.

The depth of sides and ends is immediately noticeable, such is the design of the vehicles with external bracing. Ironwork with bolt detail is represented, too, from the angled bracing of the frame, to the individually-fitted lamp brackets. Sturdy wire handrails (which don’t feel like they will fall off) are finely executed, their ends – just like the prototype – appearing to be flattened where a bolt would join them to the bodyside. Injection-moulded detail to the bodysides has made this possible, and the models look all the better for it. The side door handles have been moulded integral with the doors. Modellers seeking greater detail could swap these for individually-fitted items, but such is the excellent application of livery to the models, I’d be tempted to leave them.

While on the subject, the liveries are where these models excel. All have been faithfully researched and the colours chosen – particularly for the LSWR variants – match proprietary colours very well. Even the underside of the verandah roofs have been painted with a crisp edge finish, as the satin red meets the brown of the sides. 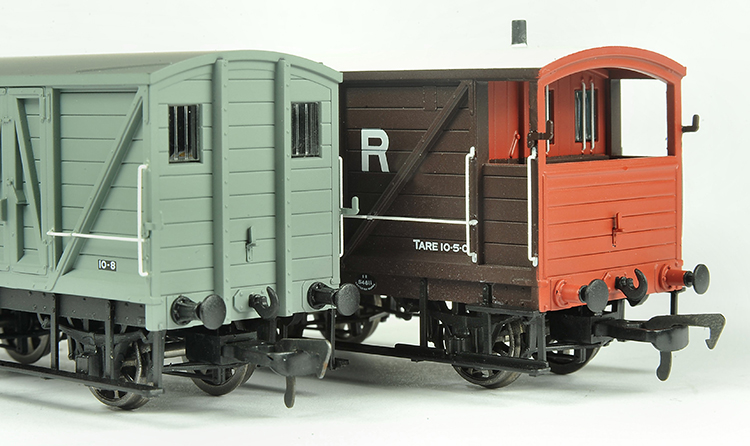 Flipping the model over, brake gear with accurate ‘inverted’ pull rodding is depicted, each of the brake beams represented either side of the axle. Careful design and planning have made this possible, while leaving space above for the NEM tension-lock couplings to pivot. Further consideration for the modeller has been given, as these sockets can be removed with a screw, allowing three-link couplings to be fitted to the hooks with relative ease.

Comparing buffer types among models shows how research has played a large part in this project. Such a small detail is noticeable by savvy modellers, and it highlights the standards that we now expect of manufacturers. The same is of the step boards, the majority of models being fitted with the straight boards, but cranked step board supports were fitted to the majority of vehicles transferred in 1925 to the Isle of Wight for greater clearance. These are fitted to Kernow’s models of 56045, S56050 and S56055.

Almost seven years after it was announced, it is only since the retailer has brought all managing of the project in-house, removing the delays caused by third parties, that this project has finally come to fruition. Kernow Model Rail Centre is now a larger business since the model was proposed, boasting another shop, with further models having seen the light of day, and more are expected.

These comprehensive new models join its growing portfolio of LSWR models and will be ideal for use with its Adams O2 0-4-4T locomotive, while providing another useful vehicle to fuel the growing interest in the pre-grouping era. Highly-recommended.