Ahead of the full review in the May 2019 issue of BRM, Howard Smith casts an eye over Hatton's new RHTT wagons...

Leaves that fall on the track in Autumn can prove problematic to trains because of a lack of traction. They can have an adverse effect on braking distances too, as the small surface between rail head and traction tyres is affected. Inboard brakes on DMUs and some wagon types prevent the clearing of leaf mulch from wheel treads, too, further contributing to a build-up of matter. Tests were conducted in the UK in the late-1970s to determine the suitability of a product known as 'Sandite' - a mixture of sand, aluminium and adhesive. In the following decades, British Rail applied the mixture to specific problematic areas of line, using dedicated trains.

In 2003, Network Rail ordered 50 FEA-F container wagons to replace a small and increasingly unreliable fleet of Rail Head Treatment Trains (RHTTs). They designed three types of module to be used between September and December. The container flats remained largely unmodified, bar the addition of multiple-working cables at the ends of the wagons, spray equipment attached to some of the bogies and their associated pipe runs to the pressure units. The three modules used on RHTT trains are the water tanks, the Sandite applicator modules (two large cabinets) and water jetting module (one large cabinet) with end-mounted fuel tank. The latter contains a diesel engine that drives a high-pressure pump, fed by water from the tank module, which is directed at the railhead surface much like a pressure washer to remove surface contaminants. The number of water modules in each train varies depending on the length of the line being covered and the opportunities to replenish the water supply. The water-jetting of rails is sometimes sufficient, occasionally omitting the application of Sandite. Careful study of photographs is recommended to ensure you make the correct purchase. 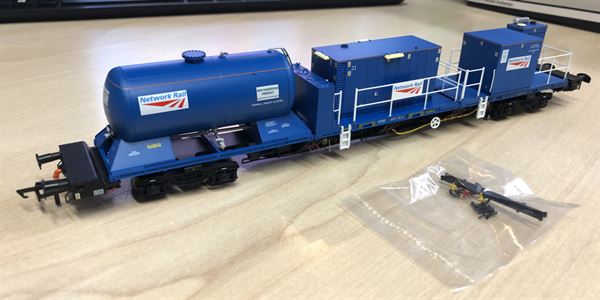 Hatton's models are exquisite in their execution, though handle with care - detail is plentiful and delicate.

Etched handrails for strength, more than 50 prints per module, warning labels, TOPs panels, weight labels. The RHTT trains are often 'top-and-tailed' for locomotive reliability, but this also avoids the requirement of a run-round loop when working branch lines. Hatton's wagons are supplied with ridged coupling bars which fit into the NEM sockets to prevent derailing of the wagons should your rearmost locomotive run faster than the front around a tight curve. The coupling bars prevent buffer-lock on second radius curves, too, with a buffer gap between wagons on straight sections of track no greater than if fitted with standard 'tension locks'. Another compromise to negotiate model railway curves are the notches in the wagon underframes behind the wheels. Clearance between one of the bogies fitted with the spray nozzles and an air pipe is exceptionally tight, particularly if not handled with care. Great care is required too when removing the wagons from their packaging - the spine of the wagon is adorned with fragile pipe detail along both sides, from air pipes to distribution valves, cylinders and purge links - all individually-applied and fragile items. The outriggers are exceptionally well-represented too, with ISO container locking mechanisms accurately depicted, their handles highlighted in red. The cast chassis of the wagon adds a great deal of weight to the model. At 162g without the container modules, these aren't light models, though it makes them very smooth runners. Helping support the extra weight are some of the strongest bogies I've seen. Their Y25 appearance is correct with sufficient depth and the axles and bearings are some of the largest diameter I've seen fitted to an RTR model. Although not visible from the outside, I assume this is for strength. End-stock detail is well-moulded with the correct multiple-working cables attached to the ends, painted orange. An accesory pack is provided which includes air hoses, dummy screw-link couplings and the NEM coupling bar to fit if desired.

Side detail is superb with the ISO container locks represented in full, picked out in red. Note the network of air pipes and valves.

To the left, the yellow hose arrives at one of the bogies where the spray mechanism is located.

Weathered versions of the RHTTs are also available, with a factory finish that authentically replicates the 'in use' appearance of the wagons shortly after their deployment. These are wagons that are known for being exceptionally dirty, and though highly authentic, it seems a shame for the plethora of warning labels, weight, TOPS and health and safety signs to be obscured - all are so crisp and neatly applied. Installing the container modules is a straightforward process - simply locate each of their corners onto the raised tabs. A little BluTak to keep them in place if not using the original boxes would be a wise move. The distinctive shape of the buffers is well-observed, though weathered versions would perhaps have benefitted from a darker colour around these.

Want to know more? Read the full review in the May issue of BRM, on-sale April 25.