Accurascale’s first releases of its eagerly-awaited HAA family of wagons are the ‘as-built’ form that were first introduced in 1964 and stayed in this manner until the later builds and rebuilds of these wagons took place from 1977.

These models are suitable from the beginning of merry-go-round workings through to the late 1970s when the rebodied version became prevalent.

Here we highlight five reasons why you need to snap up a pack or two, before they sell out!

Accurascale has produced four packs of three wagons for the HOP AB with individual numbering and slight variations in the data panels enabling a rake of 12 individually different wagons to be formed. There are two packs of the Railfreight red-cradled HAA version, meaning there are another six distinctly decorated wagons.

The models include a detail pack with scale dummy instanter couplings and bufferbeam pipes to be fitted by the user if coupling choices permit. The fitting of the pipes is the neatest we’ve seen with a peg that mounts into a socket on the rear of the bufferbeam on each side of the coupling mount; easy and tidy!

The cradle frame and die-cast chassis feature specific and very clearly defined print for markings and build plates (etched parts), and the overhead warning flashes are extremely crisp; there’s certainly nothing to fault this model decoration-wise. 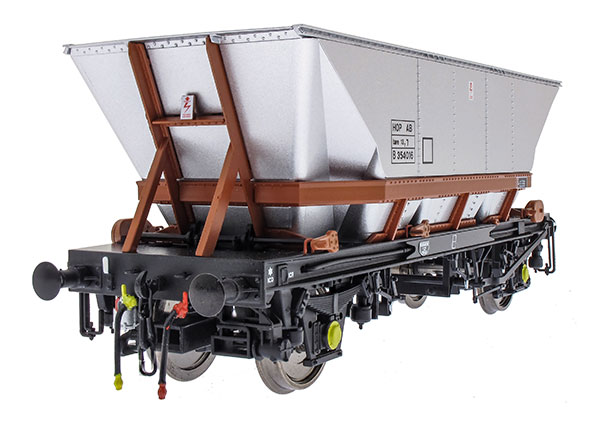 Staying with the chassis, the sprung Oleo buffers have a steel finish to the shank, something rarely seen on models in this scale.

With a pack costing around £75, with three wagons included per pack, meaning it costs the equivalent of £25 per wagon; in today’s market, that represents exceptional value for money, which will be reinforced as you look at the models more closely.

These models are approaching selling out directly with Accurascale as this is written, but stockists may have some packs available. Further batches will surely follow and we can look forward to HBA/HCA/HAD and HMA variants arriving soon, plus the distinctive hooded CDA china clay hopper. Get them while you can!

Check out our full review of the new wagons in the July issue of BRM, out this Thursday in shops!