The re-release of these wagons in new liveries as Collectors Club exclusive models from the Barwell manufacturer invites us to look back at the tooling.

Bachmann’s IPA introduced late-2010 was a change from intermodal and infrastructure wagons, offering an introduction into modern rail traffic hitherto not attempted since the Hornby ‘Cartic-4’ of 1970. More than a decade already since we marvelled at the detail on its then all-new IPA 'twin' car transporter wagons for our April 2011 issue of BRM, here's a re-cap on what we enjoyed about the model.

Related: Read about the new batch of Bachmann's IPA wagons

To coincide with completion of the Channel Tunnel and the anticipated increase in the movement of new cars, 257 twin-unit IPA automotive wagons were constructed to the UK loading gauge and delivered to STVA during 1993-4. The wagon was originally delivered in a light grey livery without the anti-vandal screens now seen on the fleet.

The wagons were quickly modified with semi-transparent screens to prevent theft and vandalism of cars which are a distinguishing feature. Each wagon has two decks to make efficient use of the loading gauge, with a mechanism for lowering the wagon deck at each end to enable the loading of the top deck. Locking bars swing into place to secure the cars at wheel level to prevent unwanted movement when in transit. IPAs are numbered in the international wagon number range: 23 87 4392 500-756.

Wagons are seen in block rakes, sometimes short, with four and six-unit trains being recorded. They also appear with other types of automotive wagons and as small blocks in mixed trains. Rover cars was a former user of the type; as are French car manufacturers such as Citroen.

A batch of 50 wagons were increased in length to four-unit sets by the building of new ‘inner’ units. They were repainted in the livery of STVA red at the same time. Numbered 23 87 4357 000-050, this increased capacity by 50% at a lower cost than constructing new twin sets. These savings were achieved with the simpler inner wagons by not including the upper deck ramp mechanism and draw gear.

The body is complex, consisting of an underframe unit, a top deck unit and separate plastic side panels. 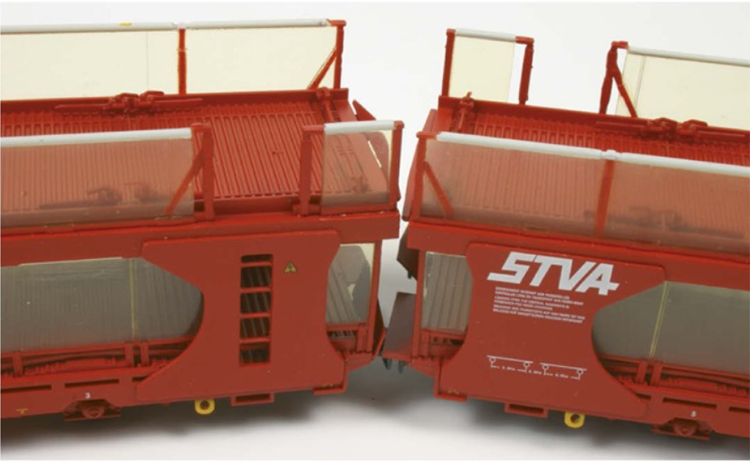 Anti-vandal screens with an effective translucent finish are fitted as separate mouldings.

The inner close coupling cam is particularly effective making the two units appear to touch when on straight track.

The plastic panels are probably a tad thick, but without resorting to etched metal, achieving scale thickness was not likely to be possible if the model was to be durable enough for layout use. Overall – a great model. Will the tooling see any updates for the latest release? We await to see!

Related: Read about the new batch of Bachmann's IPA wagons