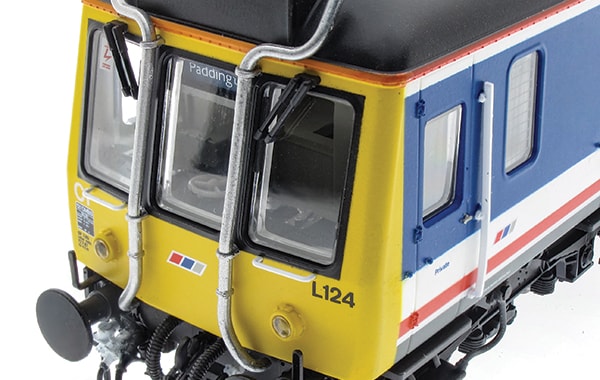 As with the Class 158, reviewed in BRM Spring 2020, the Class 121 utilises Bachmann’s new chassis design with the motor concealed below floor level giving clear floorspace through the length of the model. Being honest, it’s not produced as revolutionary a result with the 121 as the 158, now I’ve had it apart on the workbench, but that is a result of gaining the maximum amount of detail and definition to the underframe detail which is, frankly, the best we have seen from any manufacturer on a DMU.

Whilst electrical pick-up is from all wheelsets, only one motor bogie is driven with the small three-pole motor concealed within the underframe gearbox, with a cardan shaft and small gearbox unit to drive both axles of the driven bogie. The unit feels comparatively light at 195g but it is certainly sufficient to move itself and a trailing coach I hooked behind it to simulate a Class 121 DTS up some stiff inclines. 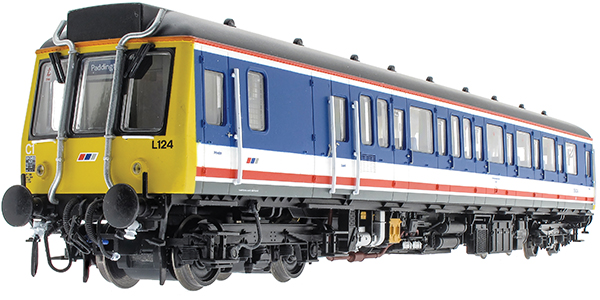 Step back to the late-‘80s with Bachmann’s glorious Class 121, it seems an age since a suburban London service was run with something so characterful.

The body unclips from the chassis; a little stiff at first but straightforward enough to gain access to the PluX22 socket which is mounted inside the guard’s compartment area. It’s very easy to fit and it has the benefit of a pre-fitted speaker facing down within one of the underframe equipment boxes. Fitted with a sound decoder, it will be great to listen to the distinct exhaust rasp and I’m musing how to replace the exhaust pipes with tubes from a smoke unit to replicate the thick clag these units could produce! For the analogue user, Bachmann has included a range of dip switches at the inner end of the leading bogie to allow the user to control the directional destination indicators, interior vestibule and cab lights. 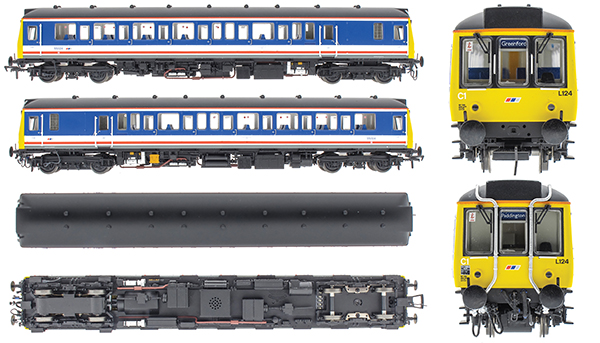 The interior has low-level flooring throughout with the drive mechanism entirely within the chassis.

Our review model sports the revised Network SouthEast livery which places it later in the 1980s onwards, numbered as 55024, with destinations of Paddington and Greenford on the blinds. In their later life the units had the four-character headcode indicator boxes plated over which has been replicated (I’ve checked, there’s no hidden characters behind there!). This is a characteristic of this particular body moulding as it also captures the rectangular grille on the bodyside adjacent to the guard’s doors which led me to find that there are two distinct body mouldings here - one for the early green model and one for this and the blue/grey version. 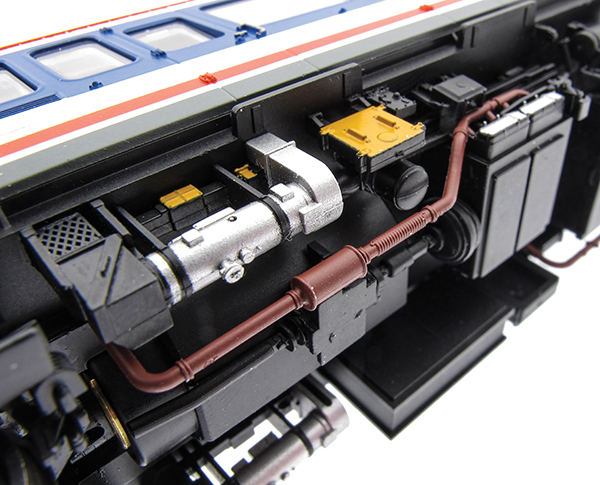 There’s a wealth of underframe detail and a factory-fitted speaker within the battery boxes.

The most eye-catching of the new models is the early BR green with speed whiskers with the factory-fresh silver equipment boxes beneath the underframe. It looks wonderful but would have lasted less than an hour! The late-1970s onwards are rewarded with a blue and grey-liveried model but when you research the prototype it’s evident that there’s sufficient variety of liveries to keep Bachmann busy for years from this tooling. The detailing pack includes cosmetic screw-link couplings, multiple working pipes and sockets and vacuum piping to be fitted if you can ditch the tension-lock couplings. This makes a huge difference to the appearance of the model.