Arriving with retailers and modellers who pre-ordered via its website, are closed and open cab variants of the model in four liveries, spanning the 1952-1994 period.

Kindly sent on-loan from Hornby HQ were samples of its 48DS in John Dewar & Sons white and red (R3705) and Army green as No. 802 (R3706). Between 1936 and 1969, 189 standard gauge locomotives were constructed at Ruston & Hornsby’s Boultham Works to evolving diagrams, until sales dwindled.

Simple to unplug from the NEM socket, the wagon can be detached, if desired. Replacement NEM couplings are provided, as are buffer beam blanking pieces. The connector cable can be unplugged too, and is handed with one pin longer than the other to prevent it from being incorrectly plugged-in. The solution is ingenious, though not unique – a similar solution being employed on Bachmann’s ‘Wickham Trolley’. I feel that the plastic connection piece between locomotive and wagon is a little restrictive in its movement. If not perfectly straight, it has a tendency to lift the leading wheels of the lightweight wagon, though can be adjusted to shape with careful bending, accordingly.

On test, the duo performed admirably around the first radius curves of our Christmas train set (see page 116), though a phosphor-bronze pick-up wasn’t touching one of the wagon wheelsets on our sample of it in the John Dewar and Sons livery. The other in Army green was fine, so it’s worth checking and adjusting, if necessary. Once tweaked, the slow-speed capability of the locomotive was exceptional, no-doubt assisted by the small diameter of the wheels. A compact three-pole motor powers both axles via miniature gears, and its torque combined with the weight of the locomotive is sufficient to haul 15 wagons with ease – more than enough for the typical one or two wagons that the prototypes would handle. 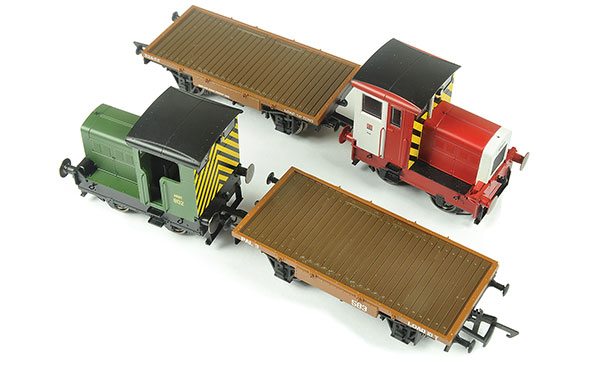 Being one of the final ten 48DS locomotives constructed, entering service in 1961, No. 458957 has a strengthened buffer beam with extra side supports. Hornby has factored in this variation on this version only, changing the chassis detail accordingly. The prototype worked at John Dewar & Sons’ Inveralmond distillery from new until its closure in 1994 and is currently preserved on the Caledonian Railway. One of two closed-cab variants to be offered in this first batch from Hornby, the model measures just 54mm in length – for reference, that’s 27mm less than the ‘Conflat’ wagon supplied. It’s a small locomotive indeed and its 21mm wheelbase makes it more than capable of negotiating the tight radius curves of whatever trackplan it might encounter.

The wheels accurately have four drilled holes, yet the flanges appear overscale. The wheels are to RP25 standards, the smaller wheel diameter merely playing tricks on the eye. The cosmetic axleboxes are well captured, while side steps are integral with the die-cast chassis. Four separately-fitted lifting eyes further elevate the detail. I appreciate the bar protruding through the chassis sides for hand cranking – detail that shows the design engineers have closely studied prototype information. 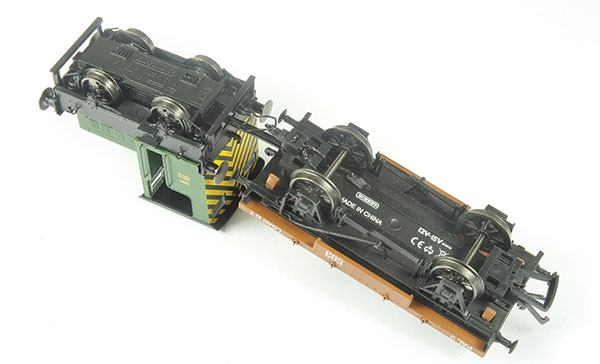 Bonnet louvre, hinge, grille and radiator filler cap detail is admirable and a similar effort has been made on the cab, which includes interior lever detail. The 7.5T locomotives had three forward and three reverse gears. Gear change was operated by a lever with no foot action necessary – each gear had its own clutch. Directional change was operated by another lever in the cab, operating sliding dog clutches in the gearbox, with power to the axles via chains. Three levers are represented inside the cab, though these are mostly obscured with the roof in place. Should you wish to install a driver, simply pull the cab roof away and secure into place with a plastic adhesive after you’ve finished.

A representation of the electric lights at the front and rear of the locomotive is good to see, the silver-painted lenses of these items being a simple item to upgrade for more discerning modellers, perhaps with a clear lens, or an LED for more ambitious modellers. A six-pin decoder socket is installed, access to which is by removing four screws to the underside of the chassis. A small light modification would be an ideal weekend project for DCC modellers. Decoration on both samples is to a high overall standard, the location of the wasp stripes on the John Dewar & Sons sample matches photographs of the prototype, though the mask used to spray the steps and axle boxes black has resulted in a little overspray to the sides and guard irons. It still doesn’t detract from what is my favourite livery from this batch and can be hidden with a little weathering, if deemed necessary.

It’s the perfect candidate for industrial modellers who are seeking a new locomotive addition to handle the odd wagon around a site. From private permanent-way contractors to civil engineers, brewers, steel works, collieries, wood importers, creosote works, docks and today a regular site on heritage railways, there’s ample opportunity to justify a 48DS on your layout. And if not, make an excuse – it’s an excellent model rendition of these wonderful little locomotives. Full marks to Hornby.