The Rail Trolley Trust Fleet acquires a Wickham Type 27 trolley, restoration of which is hoped to be completed ahead of its 90th birthday.

A Wickham Type 17 Trolley, works No. 590 has seen its long-term future secured. On January 29, the Trolley moved from Cheddleton to the Tanat Valley Light Railway, near Oswestry to join The Rail Trolley Trust – Shropshire Collection. The Trust is to refurbish the Trolley, an ideal goal being completion ahead of its 90th Birthday this July.

Withdrawn by BR (ER) in November 1972, the trolley was originally preserved at the Dinting Railway Centre (DRC) in 1979. When the DRC closed in 1990, it moved to the Bahamas Locomotive Society’s (BLS) site at Ingrow on the Keighley & Worth Valley Railway. Later it was sold by BLS to the North Staffordshire Railway Company (NSRC) and moved to the Churnet Valley Railway in late 2008. 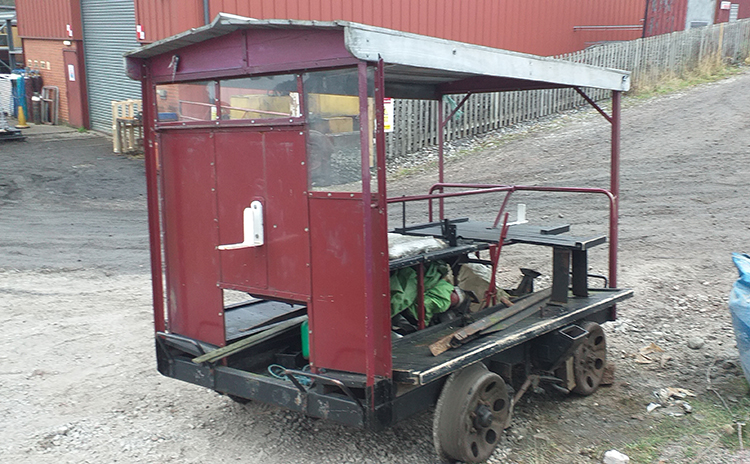 The Trust is interested in photographs of the Trolley, while it was at Dinting. Meanwhile, the arrival of the trolley at the TVLR has highlighted a lack of covered storage, especially for its more historic vehicles. The Trust is aiming to launch a significant public fundraising appeal, in part to fund the urgent purchase of suitable storage accommodation for some of its older historic vehicles and industrial equipment that are based at TVLR. For now, the Trolley will be stored under a heavy-duty tarpaulin.

The Trust would like to thank the Directors of NSRC (1978) Ltd for gifting the Trolley to the Trust and Adam Jeffrey, for moving the Trolley from the CVR to the TVLR.