The Bachmann Collectors Club and Locomotion Models have joined forces to release a striking new OO scale model of a Class 90 electric locomotive. 90028 Sir William McAlpine in DB Cargo livery was launched at Model Rail Scotland today (February 25, 2022) and is available to purchase now, both at the event and online. 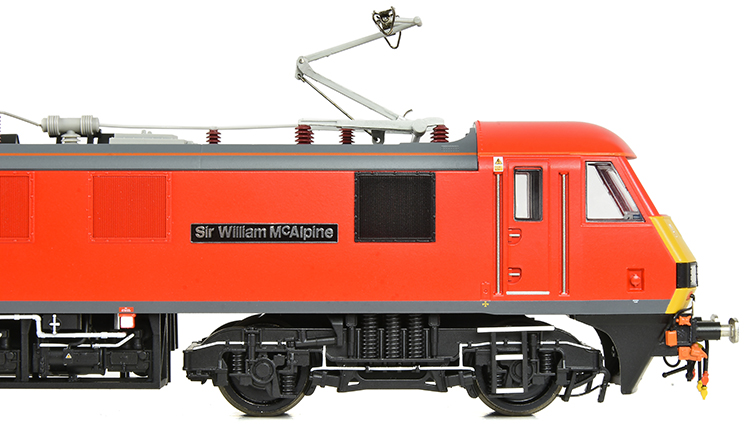 Fifty Class 90 locomotives were ordered by British Rail in 1986 to replace the ageing Class 85 fleet on West Coast Main Line duties. Construction of the 110mph rated locomotives was completed by British Rail Engineering Limited, Crewe, in 1990. They subsequently saw service with several operators and have carried numerous different liveries since Privatisation in 1994. DB Cargo named Class 90 locomotive 90028 Sir William McAlpine on January 11, 2019 at the National Railway Museum in York. A special train conveying guests was hauled nonstop from Kings Cross by ‘Flying Scotsman’ and returned to London behind the newly named electric locomotive. Both locomotives posed for photographs outside the museum as a tribute to a remarkable man, Sir William McAlpine – a lifelong railway enthusiast who sadly passed away on March 4, 2018.

Sir William had joined the family construction company straight from school, eventually becoming the Director responsible for its operations in Scotland. In 1961 he bought, for himself, the company’s last steam locomotive for £100 and built a railway for it to run on at his Buckinghamshire home. Then in 1973, he rescued ‘Flying Scotsman’ from the USA purchasing it from the receivers after a failed tour, retaining ownership until 1996. Sir William became involved in railway preservation and was the first Chairman of the Railway Heritage Trust. Following the death of his father in 2018, Sir Andrew McAlpine became the 7th Baronet McAlpine, of Knott Park, Surrey and he retains this title to this day. 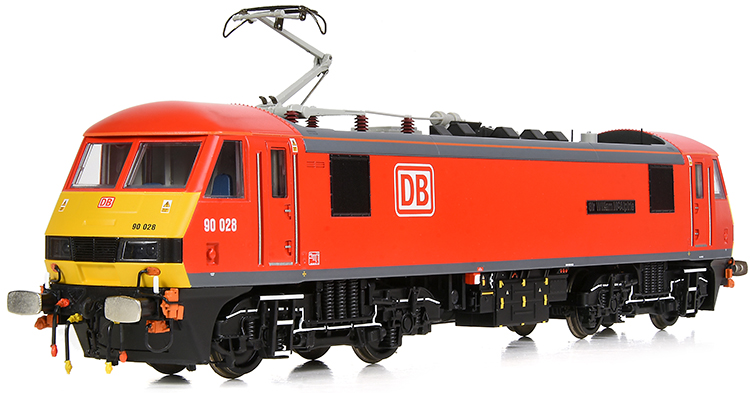 The Bachmann Branchline Class 90 was first released in 2019 and now appears in the much-requested red livery of DB Cargo for the first time. Combining an accurate and detailed body shell with an authentic chassis and bogies – each featuring a wealth of separately fitted detail – the Branchline Class 90 captures the distinctive shape and character of the real locomotives to a tee. Models also feature multiple lighting functions and realistic operations, such as day or night modes for the directional lighting. When used on DCC, the pantograph  which is a fine reproduction featuring metal components, can be operated remotely via the built-in servo motor, meaning it can be raised and lowered at any time, without having to intervene by hand. The sound-fitted model offers authentic sound effects and is pre-configured for DCC operation of the motorised pantograph.

Richard Proudman, Rail Brand Manager for Bachmann Europe said, “Since the Bachmann Branchline Class 90 was first released in 2019, we have received many different requests from consumers who want to see the Class 90 released in their favourite livery, and DB Cargo has been high on the list for many people. I am therefore delighted that the Bachmann Collectors Club and Locomotion Models have partnered together to make this model happen, and there could be no better place than Model Rail Scotland for its grand unveiling. The National Railway Museum, which runs Locomotion Models, is immensely important when it comes to nurturing and inspiring new and existing railway modellers, and so we are delighted that sales of this new model will help to support this cornerstone of rail heritage.”

Dennis Lovett, Exclusive Models Marketing Manager of Locomotion Models added, “I was fortunate to meet Sir William on several occasions and also attended one of his open days at his museum and railway in South Buckinghamshire. Sir William did much for both heritage railways and for the railway industry in general. I can think of a no more fitting tribute to him than by releasing this model in conjunction with the Bachmann Collectors Club”.